The victory over Tipu and Kattabomman had released British forces from several fronts to target the fighting forces in Ramanathapuram and Sivagangai.

The victory over Tipu and Kattabomman had released British forces from several fronts to target the fighting forces in Ramanathapuram and Sivagangai. Thondaiman of Pudukottai had already joined the side of the Company. The Company had also succeeded in winning the support of the descendent of the former ruler of Sivagangai named Padmattur Woya Thevar. Woya Thevar was recognised by the Company as the legitimate ruler of Sivagangai. This divisive strategy split the royalist group, eventually demoralizing the fighting forces against the British.

In May 1801 a strong detachment under the command of P.A. Agnew commenced its operations. Marching through Manamadurai and Partibanur the Company forces occupied the rebel strongholds of Paramakudi. In the clashes that followed both sides suffered heavy losses. But the fighters’ stubborn resistance and the Marudu brothers’ heroic battles made the task of the British formidable. In the end the superior military strength and the able commanders of the British army won the day. Following Umathurai’s arrest Marudu brothers were captured from the Singampunary hills, and Shevathiah from Batlagundu and Doraiswamy, the son of Vellai Marudu from a village near Madurai. Chinna Marudu and his brother Vellai Marudu were executed at the fort of Tiruppatthur on 24 October 1801. Umathurai and Shevathiah, with several of their followers, were taken to Panchalamkurichi and beheaded on 16 November 1801. Seventy three rebels were banished to Penang in Malaya in April 1802. 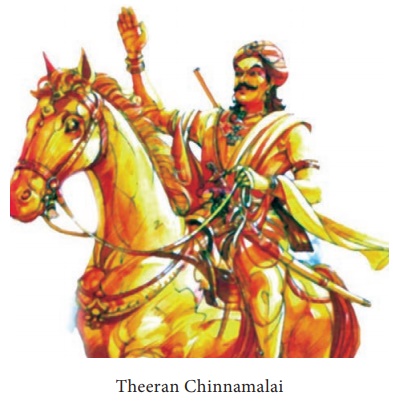 The Kongu country comprising Salem, Coimbatore, Karur and Dindigul formed part of the Nayak kingdom of Madurai but had been annexed by the Wodayars of Mysore. After the fall of the Wodayars, these territories together with Mysore were controlled by the Mysore Sultans. As a result of the Third and Fourth Mysore wars the entire Kongu region passed into the hands of the English.

Theeran Chinnamalai was a palayakkarar of Kongu country who fought the British East India Company. He was trained by the French and Tipu. In his bid to launch an attack on the Company’s fort in Coimbatore (1800), Chinnamalai tried taking the help of the Marudu brothers from Sivagangai. He also forged alliances with Gopal Nayak of Virupatchi; Appachi Gounder of Paramathi Velur; Joni Jon Kahan of Attur Salem; Kumaral Vellai of Perundurai and Varanavasi of Erode in fighting the Company.

Chinnamalai’s plans did not succeed as the Company stopped the reinforcements from the Marudu brothers. Also, Chinnamalai changed his plan and attacked the fort a day earlier. This led to the Company army executing 49 people. However, Chinnamalai escaped. Between 1800 and July 31, 1805 when he was hanged, Chinnamalai continued to fight against the Company. Three of his battles are important: the 1801 battle on Cauvery banks, the 1802 battle in Odanilai and the 1804 battle in Arachalur. The last and the final one was in 1805. During the final battle, Chinnamalai was betrayed by his cook Chinnamalai and was hanged in Sivagiri fort.

Vellore Revolt 1806 was the culmination of the attempts of the descendents of the dethroned kings and chieftains in south India to throw of the yoke of the British rule. After the suppression of revolt of Marudu brothers, they made Vellore the centre of their activity. The organizers of an Anti-British Confederacy continued their secret moves, as a result of which no fewer than 3,000 loyalists of Mysore sultans had settled either in the town of Vellore or in its vicinity. The garrison of Vellore itself consisted of many aggrieved persons, who had been reduced to dire straits as a sequel to loss of positions or whose properties had been confiscated or whose relatives were slain by the English. Thus the Vellore Fort became the meeting ground of the rebel forces of south India. The sepoys and the migrants to Vellore held frequent deliberations, attended by the representatives of the sons of Tipu.

In the meantime, the English enforced certain innovations in the administration of the sepoy establishments. They prohibited all markings on the forehead which were intended to denote caste and religious, and directed the sepoys to cut their moustaches to a set pattern. Added to these, Adjutant General Agnew designed and introduced under his direct supervision a new model turban for the sepoys.

The most obnoxious innovation in the new turban, from the Indian point of view, was the leather cockade. The cockade was made of animal skin. Pig skin was anathema to Muslims, while upper caste Hindus shunned anything to do with the cow’s hide. To make matters worse the front part of the uniform had been converted into a cross.

The order regarding whiskers, caste marks and earrings, which infringed the religious customs of both Hindu and Muslim soldiers, was justified on the grounds that, although they had not been prohibited previously by any formal order, it had never been the practice in any well-regulated corps for the men to appear with them on parade.

The first incident occurred in May 1806. The men in the 2nd battalion of the 4th regiment at Vellore refused to wear the new turban. When the matter was reported to the Governor by Col. Fancourt, commandant of the garrison, he ordered a band of the 19th Dragoons (Cavalry) to escort the rebels, against whom charges had been framed, to the Presidency for a trial. The 2nd battalion of the 4th regiment was replaced by the 2nd battalion of the 23rd regiment of Wallajahbad. The Court Martial tried 21 privates (a soldier of lower military rank)– 10 Muslims and 11 Hindus–, for defiance. In pursuance of the Court Martial order two soldiers (a Muslim and a Hindu) were sentenced to receive 900 lashes each and to be discharged from service.

Despite signals of protest the Government decided to go ahead with the change, dismissing the grievance of Indian soldiers. Governor William Bentinck also believed that the ‘disinclination to wear the turban was becoming more feeble.’

Though it was initially claimed that the officers on duty observed nothing unusual during the night of July 9, it was later known that the English officer on duty did not go on his rounds and asked one of the Indian officers to do the duty and Jameder Sheik Kasim, later one of the principal accused, had done it. The leaders of the regiment who were scheduled to have a field day on the morning of 10 July, used it as a pretext to sleep in the Fort on the night of 9 July. The Muslim native adjutant contrived to post as many of his followers as possible as guards within the Fort.

Jamal-ud-din, one of the twelve princes of Tipu family, who was suspected to have played a key role in the revolt, kept telling them in secret parleys that the prince only required them to keep the fort for eight days before which time ten thousand would arrive to their support. He disclosed to them that letters had been written to dispossessed palayakkarars seeking their assistance. He also informed that there were several officers in the service of Purniah (Tipu’s erstwhile minister) who were formerly in the Sultan’s service and would undoubtedly join the standard. 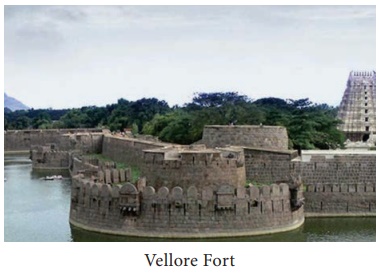 At 2:00 a.m. on 10 July, the sentry at the main guard informed Corporal Piercy saying that a shot or two had been fired somewhere near the English barracks. Before Piercy could respond, the sepoys made a near simultaneous attack on the British guards, the British barracks and the officers’ quarters in the Fort. In the European quarters the shutters were kept open, as they were the only means of ventilation from the summer heat. The rebels could easily fire the gun ‘through the barred windows on the Europeans, lying unprotected in their beds.’ Fire was set to the European quarters. Detachments were posted to watch the dwellings of the European officers, ready to shoot anyone who came out. A part of the 1st regiment took possession of the magazines (place where gun powder and ball cartridges stored). A select band of 1st Regiment was making their rounds to massacre the European officers in their quarters.

Thirteen officers were killed, in addition to several European conductors of ordnance. In the barracks, 82 privates died, and 91 were wounded.

Major Armstrong of the 16th native infantry was passing outside the Fort when he heard the firing. He advanced to the glacis and asked what the firing meant. He was answered by a volley from the ramparts, killing him instantly. Major Coates, an officer of the English regiment who was on duty outside the Fort, on hearing of the revolt tried to enter the Fort. As he was unable to make it, he sent off an officer, Captain Stevenson of 23rd, to Arcot with a letter addressed to Colonel Gillespie, who commanded the cavalry cantonment there. The letter reached Arcot, some 25 km away, at 6 a.m. Colonel Gillespie set out immediately, taking with him a squadron of the 19th dragoons under Captain Young, supported by a strong troop of the 7th cavalry under Lieutenant Woodhouse. He instructed Colonel Kennedy to follow him with the rest of the cavalry, leaving a detachment to protect the cantonment and to keep up the communication.

When Colonel Gillespie arrived at the Vellore Fort at 9 a.m., he thought it prudent to await the arrival of the guns, since there was continuous firing. Soon the cavalry under Kennedy came from Arcot. It was about 10 o’Clock. The gate was blown open with the galloper guns of the 19th dragoons under the direction of Lieutenant Blakiston. The troops entered the place, headed by a squadron of the cavalry under Captain Skelton.

The Gillespie’s men were met by a severe crossfire. In the ensuing battle, Colonel Gillespie himself suffered bruises. The sepoys retreated. Hundreds escaped over the walls of the Fort, or threw down their arms and pleaded for mercy. Then the cavalry regiment assembled on the parade ground and resolved to pursue the fleeing soldiers, who were exiting towards the narrow passage of escape afforded by the sally port. A troop of dragoons and some native horsemen were sent round to intercept the fleeing soldiers. All the buildings in the Fort were searched, and mutineers found in them pitilessly slaughtered. Gillespie’s men wanted to enter the building and take revenge on the princes, the instigators of the plot; but Lt. Colonel Marriott resisted the attempt of the dragoons to kill Tipu’s sons.

According to J. Blakistan, an eyewitness to Gillespie's atrocity, more than 800 bodies were carried out of the fort. In W.J. Wilson's estimate 378 were jailed for involvement in the revolt; 516 were considered implicated but not imprisoned. Based on depositions before the Court of Enquiry, the Court Martial awarded death punishment and banishment to select individuals, which were carried out by the commanding officer of Vellore on 23 September 1806.

Colonel Gillespie is said to have brought the Fort under the possession of the English in about 15 minutes. Col. Harcourt (Commanding Officer at Wallajahbad) was appointed to the temporary command of Vellore on July 11 Harcourt assumed command of the garrison on 13 July, 1806 and clamped martial law. It was believed that the prompt and decisive action of Gillespie put an end to ‘the dangerous confederacy, and had the fort remained in the possession of the insurgents but a few days, they were certain of being joined by fifty thousand men from Mysore.’

But the obnoxious regulations to which the soldiers objected were withdrawn. The Mysore princes were ordered to be sent to Calcutta, as according the Commission of Inquiry, their complicity could not be established. They were removed from Vellore, on 20 August 1806. The higher tribunals of the Home Government held the chief authorities of Madras, namely the Governor, the Commander-in-Chief, and the Deputy Adjutant General, responsible for the bungling and ordered their recall.

Vellore had its echoes in Hyderabad, Wallajahbad, Bangalore, Nandydurg, Palayamkottai, Bellary and Sankaridurg. Vellore Revolt had all the forebodings of Great Rebellion of 1857, if the word cartridge is substituted by cockade and Bahadur Shah and Nana Sahib could be read for Mysore Princes.