In the late eighteenth and early nineteenth centuries the land tenures and revenue settlements of the Company’s government had fundamentally disrupted the Indian rural society and affected the peasantry in an unprecedented manner.

In the late eighteenth and early nineteenth centuries the land tenures and revenue settlements of the Company’s government had fundamentally disrupted the Indian rural society and affected the peasantry in an unprecedented manner. In the early days of revenue farming system, the peasantry was oppressed by the revenue contractors and company officials who imposed high revenue demands and collected them forcibly. Initially the peasants sent a petition to the Company’s government asking for redress. But when their appeal for justice went unheeded, they organized themselves and resorted to direct action. They attacked the local cutchery (revenue collector’ office), looted gain stores and refused to pay revenue.

A peasant movement of the 1840s and 1850s was the Malabar rebellion in present day Kerala. The Mappillas were the descendents of Arab traders who had settled in this region and had married the Malabar women. Gradually the Mappillais became dependent on agriculture and turned into a community of cultivating tenants, landless labourers, petty traders and fishermen. When the British took over Malabar in 1792, they sought to revamp the land relations by creating individual ownership in land. The traditional system provided for an equal sharing of the net produce of the land by the janmi (holder of janmam tenure), the kanamdar (holder of kanam tenure), and the cultivator. The British system upset this arrangement by recognising the janmi as absolute owners of land, with right to evict tenants, which did not exist earlier. Apart from that, over-assessment, a huge burden of illegal cesses and a pro- landlord attitude of the judiciary and the police led the peasants to live in conditions of extreme poverty.

A series of incidents therefore occurred in Malabar throughout the nineteenth century. Three serious incidents occurred in Manjeri in August 1849, in Kulathur in August 1851 – both in south Malabar – and in Mattannur in the north in January 1852. British armed forces were deployed to suppress the revolt. The repressive measures restored peace for about twenty years, but then the Mappillas rose again in 1870 and the events followed a similar course.

Some of the rebellions in pre-1857 India were of the tribals whose autonomy and control over local resources were threatened by the establishment of British rule and the advent of its non-tribal agents. The tribal people, spread over a large part of India, rose up in hundreds of insurrections during the 19th century. These uprisings were marked by immense courage on their part and brutal suppression on the part of the rulers.

Kols as tribals inhabited in Chotanagpur and Singbhum region of Bihar and Orissa. The immediate cause of their uprising was the action of the Raja of Chotanagpur in leasing several villages to the non-tribals. The Kols of Sonepur and Tamar took the initiative in organizing a revolt against the thikadars (tax collectors). The forms of rebellion consisted of attacks on the properties of the outsiders, but not their lives. Plunder and arson, were the chief modes of peasant protest. Sonepur pargana of Chotanagpur was raided, plundered and burnt down by a body of seven hundred insurgents on 20 December 1831. By 26 January 1832 the Kols had taken complete possession of the whole of Chotanagpur. The revolt against the British had ended up in a war against the Company government. Buddha Bhagat, the leader of Kol insurrection was killed in a pitched battle. A sum of one thousand rupees was distributed among officers and soldiers as their reward for delivering Bhagat’s severed head to the authorities. Bhindrai Manki who inspired the revolt surrendered on 19 March 1832 and with his surrender the revolt of Kols came to a tragic end. 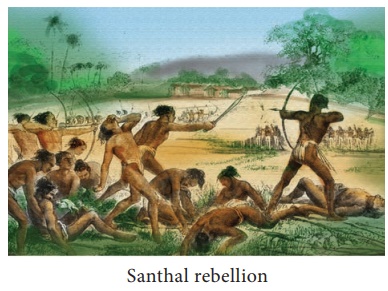 Santhal, also called Manji, lived scattered in various forest regions of Bengal, Bihar, and Orissa. Driven from their homeland, they cleared the area around the Rajmahal Hills and called it Damin-i-koh (land of Santhals). They were gradually driven to a desperate situation as tribal lands were leased out to non-Santhal zamindars and moneylenders. To this was added the oppression of the local police and the European officials engaged in railroad construction. This penetration of dikus (outsiders) completely destroyed their familiar world, and forced them into action to take possession of their lost territory.

In July 1855, when their ultimatum to the zamindars and the government went unheeded, several thousand Santhals, armed with bows and arrows, started an open insurrection “against the unholy trinity of their oppressors-the zamindars, the mahajans and the government.” At the battle of Maheshpur, many of the Manjis were dressed in red clothes. Later this garment became an assertion of authority. In the first week of the rising a party of ten men attacked and burnt down the village of Monkaparrah. The rebels included a number of women.

Initially their leader was Sido. After his arrest the revolt was led by Kanoo. At the later stage of the revolt, the peasants also joined. Several thousand peasants raided on Charles Maseyk’s indigo factory and pillaged. This invited brutal counter-insurgency measures; the army was mobilized and Santhal villages were burnt one after another with vengeance. According to one calculation, out of thirty to fifty thousand rebels, fifteen to twenty thousand were killed before the insurrection was finally suppressed. 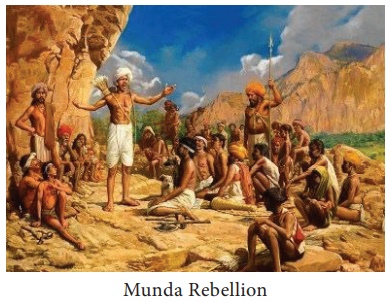 The rebellion (ulgulan) of the Munda tribesmen led by Birsa Munda, occurred during 1899-1900. Mundas were a prominent tribe in the Bihar region. During the British rule their system of common land holdings was destroyed. Jagirdars, thikadars (revenue farmers) and moneylenders grabbed the land owned by them. Birsa, born in a poor share-cropper household in 1874, declared himself a divine messenger to drive away the British and establish Munda rule in the region. Under his influence the Mundas strongly opposed non-tribals occupying tribal lands. He urged the Munda cultivators not to pay rent to the zamindars.

Birsa Munda led a revolt in the Chotta Nagpur region. The indiscriminate slaughter of Munda women at Sail Rakab did not deter the followers of Birsa. The British authorities issued a warrant for Mirsa’s arrest and put up a reward for his capture. Birsa became a martyr in Ranchi jail (9 June 1900). His name continues to inspire the tribals of the region.