Mysore Sultans and their Resistance

Mysore was a small feudatory kingdom under the Vijayanagar Empire.

Mysore Sultans and their Resistance

Mysore was a small feudatory kingdom under the Vijayanagar Empire. After Vijayanagar fell in 1565, the ruling dynasty of Wodeyars asserted their independence and the Raja Wodeyar ascended the throne in 1578. The capital moved from Mysore to Srirangapatnam in 1610. Wodeyar dynasty continued to reign until 1760, when the real power changed hands to Haider Ali who was appointed Dalwai or prime minister. 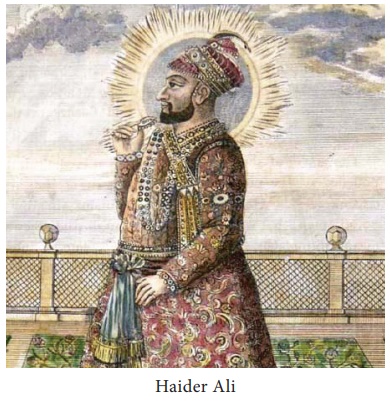 Haider’s father Fateh Muhammad was the Faujdar (garrison commander) of Kolar. After his death Haider’s soldierly qualities helped him to rise through the military ranks. By 1755 he had secured a powerful position, commanding 100 horsemen and 2000 infantry men. Haider suppressed an army mutiny in Mysore and restored the places of the Mysore kingdom occupied by Marathas. He received the title of “Fateh Haider Bahadur” or “the brave and victorious Lion”. In 1760 Haider allied himself with the French at Pondicherry against the English, but his position at home was endangered by the plot engineered by the Marathas. As Haider successfully handled the situation and thereafter he became not only Dalawai but the de facto ruler of Mysore. In 1770 the Mysore king Nanjaraja was poisoned to death and Haider’s hand was suspected. Thereafter Wodeyar kings functioned only as nominal rulers. The real royal authority vested in Haider.

Haider Ali and the British

After obtaining Diwani right (right to collect taxes on behalf of the Mughal emperor from Bengal, Bihar and Orissa), the Company had to safeguard its territories. As the Company was not strong enough, it avoided interfering in the internal affairs of the Indian states. Warren Hastings maintained buffer states to live within a “Ring Fence”. The Company was, however, drawn towards the affairs of the Carnatic, due to the successive struggles for its Nawabship. The English traders saw in this a great opportunity to directly interfere in Indian politics. However, there were threats from two strong powers represented by Haider Ali and the Nizam of Hyderabad.

In the third Carnatic War Colonel Forde while conducting the forces from Bengal captured Masulipatnam in 1759. This led to a treaty with Salabad Jung, who ceded the Northern Sarkars to the British (districts of Ganjam, Vizagapatnam, Godavari, Krishna and Guntur) . English acquisition of the Northern Sarkars was legalized by the Mughal emperor in 1765 by the treaty of Allahabad. In 1766, trouble arose when the English occupied those districts. Yet a treaty was signed with Nizam Ali who acquiesced in the session. In return the English promised to help out in case of any danger from the enemies. This promise meant English help to the Nizam against Haider Ali. Here lay the genesis of the later Subsidiary System. Despite the treaty, Nizam came to an understanding with Haider in 1767 and the British therefore declared a war against Haider. This is called First Anglo-Mysore War or First Mysore War.

An English army from Bombay captured Mangalore and other surrounding places on the West Coast. But Haider succeeded in recovering both. The English made an attempt to capture Bangalore but to no avail. In 1768 Haider pounced on Baramahal (Salem district) and marched on Karur and then Erode and took over both by defeating Captain Nixon. Meanwhile, his general Fazalullah Khan marched on Madurai and Tirunelveli. Haider advanced to Thanjavur and from there to Cuddalore. Though Haider did not want stop his offensive against the English, the threat of Maratha invasion forced him to negotiate peace with the English. The terms of Treaty of Madras were as follows: the conquered territories to be restored to each, excepting Karur which was to be retained by Haider. Mutual assistance was to be rendered in wars of defence. This meant the English were under obligation to help Haider against the Marathas. But when assistance from English was not forthcoming, Haider turned against the English.

After the American War of Independence, France had signed a treaty of friendship with America (1778) and so Britain declared war against France. In a similar context of Spain reaching an agreement with America, and thereby being dragged into the war against England (1779) England remained isolated. In India the coming together of the Nizam and the Marathas, supported by the French aggravated the situation further. Haider Ali wanted to turn England’s difficulty to its advantage and marched on Karnataka.

Colonel Baillie, who was to join the force led by Hector Munro, was badly wounded in a sudden attack by Haider. This forced Munro to move Madras. Haider captured Arcot (1780). Now on request from Madras government Sir Eyre Coote, the victor of the Battle of Wandawashi, was sent from Calcutta to besiege Madras by sea. Having scored a victory against Haider, Coote proceeded to Pondicherry. Haider in the meantime overran the kingdom of Thanjavur. Coote reached Porto Novo and won a decisive victory over Haider. Haider narrowly escaped capture. Colonel Braithwaite was thoroughly defeated near Kumbakonam by Haider’s son Tipu and taken prisoner. In order to divert the attention of the Mysore Sultan, an expedition was undertaken by General Mathews to capture Mangalore. Expectedly Tipu abandoned Karnataka and moved to West Coast.

The death of Haider due to cancer in 1782, the signing of Treaty of Paris (1783) at the end of American War of Independence, and the protracted siege of Mangalore enabled the English to be aggressive against Tipu. Karur and Dindigul were captured by Colonel Lang, Colonel Fullerton seized Palghat and Coimbatore but this advance on Srirangapatnam was pre-empted by Tipu with his proposal for peace. The Treaty of Mangalore was signed in March 1784, according to which both parties agreed to give up their conquests and release the prisoners.

In the meantime Lord Cornwallis had become governor general. Cornwallis wanted to deal with Tipu in a revengeful manner. The two great southern powers, the Nizam of Hyderabad and the Maratha confederacy, supported the British as its allies. The Nizam of Hyderabad supplied resources and even troops for the British. The Marathas, who had signed the Treaty of Salbai with the English after the First Anglo-Maratha war in 1782, also joined the British. The British position was thus greatly strengthened.

Tipu sent an embassy to Constantinople and another in 1787 to Paris. These diplomatic efforts of Tipu were intended to strengthen him against the English. The French Monarch Louis XVI was hospitable, but could give only vague promises of support to the Sultan.

Tipu’s attack on Travancore which was an ally of the British and his capture of Cranganore was treated as a declaration of war on the Company government. Hence the third Anglo-Mysore War broke out. 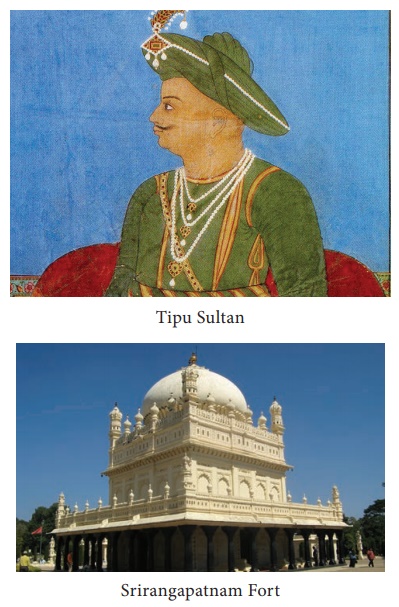 Colonel Hartley defeated Tipu’s general Husain Ali at Calicut. In response Tipu captured Tiruvannamalai. His effort to get the support of French Pondicherry Governor did not materialise. Cornwallis himself marched from Vellore and reached Bangalore. On his way he encountered Tipu and defeated him near Srirangapatnam. But lack of provisions compelled Cornwallis to retreat. At this juncture the Marathas helped the British in supplying the required provisions. The reinforced army of the English marched on Srirangapatnam again and besieged it. Unable to withstand the onslaught of the British forces Tipu offered peace and accepted the terms imposed by Cornwallis.

According to the treaty of Srirangapatnam, the Tipu was to give up half of his dominions, pay three crores of rupees as indemnity, and pledge two of his sons as hostages. The allies were given equal shares of the indemnity and of the ceded territories. The English got Malabar, Dindigul and Barmahal. Tipu lost Coorg (Kudagu), whose raja became a feudatory to the Company. Tipu’s power was greatly reduced. And after their stay at Madras as hostages the boys returned to Srirangapatnam on 29 May 1794 when their father had paid all the dues to the English. Tipu could hardly forget his humiliation and the heavy territorial and monetary losses suffered.

The Mysore king Chamaraj IX died in 1796. Tipu resolved not to observe the formality of appointing a king. Synchronizing with this resolve came the announcement of the French colonial Governor of Mauritius General Malartic that, after obtaining French help, he would declare war on the English. In July 1798 Tipu’s correspondence with the French Directory and later with Napoleon and his evasiveness in his correspondence with Wellesley led to his declaration of war against Tipu.

Tipu made all out efforts to strengthen his military and financial resources. In 1796 Tipu sent emissaries to Paris again. In 1797 he received a French emissary to confirm French support from Mauritius. A Jacobin club was started in Srirangapatinam and the flag of the French Republic was hoisted to mark the cordiality established between the French and the Sultan of Mysore.

Irked by Tipu’s alliance with the French Wellesley, now the new Governor General, insisted on a standing army at Mysore under the Subsidiary System. Tipu turned down Wellesley’s proposal and the British declared the fourth Anglo -Mysore war in 1799. General David Baird stormed Srirangapatnam. Tipu’s offer of peace was rejected and in the eventual battle Tipu was wounded and soon after shot dead by a European Soldier.

The elimination of Tipu and the restoration of the old Wodeyar dynasty to the Mysore kingdom marked the real beginning of Company rule in south India. The sons of the slain Tipu were interned first at Vellore, and later, after the Vellore Revolt of 1806, shifted to Calcutta. Thus ended the valiant fight of Mysore Sultans against the British.