The Site of a settlement describes the physical nature of where it is located.

The Site of a settlement describes the physical nature of where it is located. Factors such as water supply, building materials, quality of soil, climate, shelter and defence were all considered when settlements were first established. For instance, the site of Sydney, in Australia, initially took advantage of the excellent natural harbour and surrounding fertile farmland. 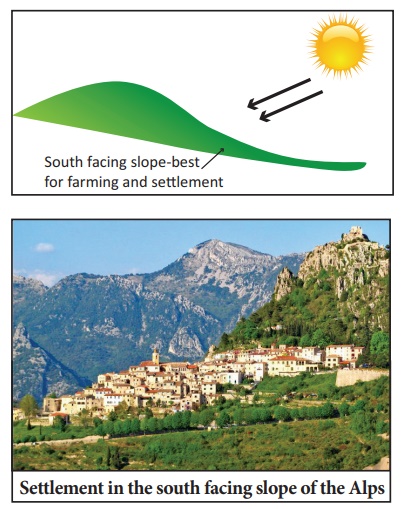 Aspect and shelter are two of the most important factors that were considered when deciding where to locate a settlement. Aspect relates to the direction in which the land faces. In the Northern Hemisphere the best slopes to locate on are those that face south, as they will receive the most sunshine, and therefore be the best for agriculture. This can be seen clearly in many of the valleys of the Alps, where settlements have located on the south-facing slopes.

Shelter is also very important, particularly from the cold northerly winds and prevailing south westerly winds in the UK. A good example of settlements being sheltered by their natural surroundings are the many spring-line settlements found along the base of the chalk escarpments of the North and South Downs. These settlements would also have benefited from the good water source and fertile farmland nearby.

Water supply is probably the single most important factor in deciding where a settlement might be located. Not only do rivers provide a source of clean drinking water, they also provide a food source through fishing, and a transport route. Most of the world's largest cities are located on rivers, especially the point at which they reach the sea, as this was often the first point that explorers landed.

A dry point site is one that is slightly raised from the surrounding area, meaning that it is less likely to flood. Ely in Cambridgeshire, England, is a good example of dry point site. 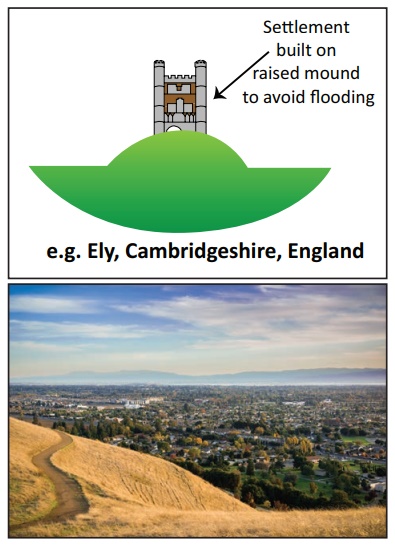 Wet point site refers to any site that has access to water, usually through being beside a river. Towns would either grow up along the river or clustered near the point at which the river enters the sea. Examples of wet point sites include the towns and villages of the Welsh valleys, which tend to extend along the flat valley floor, rather than up the steep valley sides. Spring line settlements in the North and South Downs, England are also good examples of wet point sites. 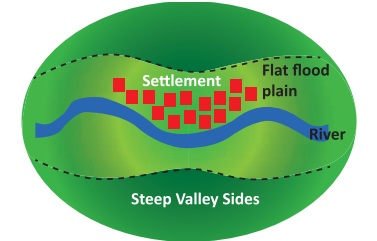 In medieval times, defence was one of the most important factors influencing the site of a settlement. The relief of the land often proved to be the best form of defence. Edinburgh castle sits on the top of a glacial crag, in an almost perfect position to defend itself, with very little chance for the attackers. In Italy, there are many walled hill-top villages, whilst the Maoris in New Zealand built their settlements (called Pa's) on the top of steep hills to prevent being attacked. In India, Ichhapur Defence Estate is a census town in Barrackpore, West Bengal.

The other common natural feature used for defence is water, and in particular rivers. Both Shrewsbury and Durham are very good examples of where a meander of the river has formed an area of land bounded by water on three sides. This provided both cities with excellent defence, as they only had a thin neck of land to defend. 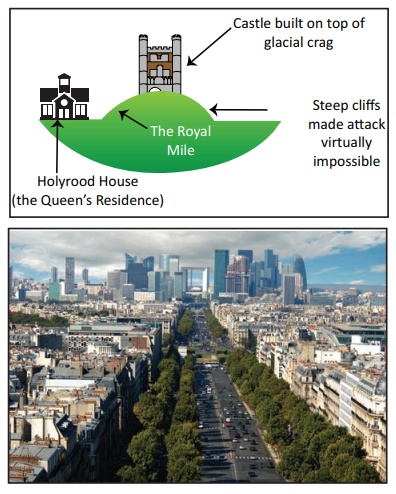 The idea of resources covers a huge number of different things. For early settlers the most important resources were fuel, building materials and food. Settlements grew in areas where wood was plentiful, stone easily accessible and good soil allowed agriculture to be developed.

Since  in early days of settlement many different resources have become the focal points for the growth of urban areas. Some of the settlements based on the resources are listed below:

The coal mines of South Wales, Tin mines of Cornwall and large mining projects at Carajas in Northern Brazil, have all encouraged the rapid growth of settlements aimed at housing the workers and providing them with all that they re0quire.

Settlements in South Africa have grown after the discovery of large deposits of precious metals such as gold. The most famous settlement grew due to finding gold is San Francisco, after the gold rush to California in 1849.

Route centres are often called Nodal Points. Nodal Points are formed by the meeting of two valleys, but settlement nowadays will grow where two main roads meet. In the UK, York is a good example of a route centre. Birmingham also enjoys a very good location, where many routes join up, and this is one of the reasons for its growth to become one of the largest cities in the UK. 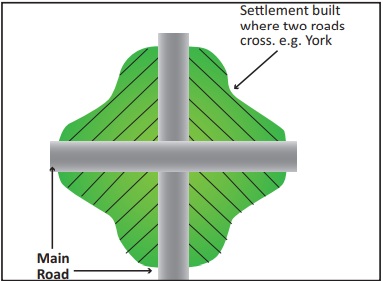 Just as water is very important for drinking, fishing, irrigation and navigation, so the ability to cross the rivers is also very important.

Many towns and cities have built up at points where it was the easiest to cross a large river. Exeter is one such example, crossing the river Exe in England.

However one of the best examples is Paris in France. The original town was based on the tiny Ile dela Cite, which is an island in the middle of the River Seine. This island meant they could build two small bridges across the river rather than one large one. 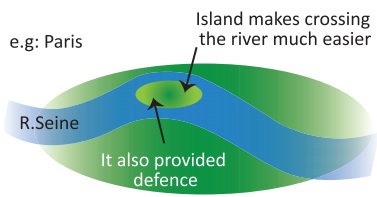 Nowadays the island has been engulfed by the huge city that Paris has become, however it does still have many bridges going to it and is the point where the huge Notre Dame Cathedral is built. 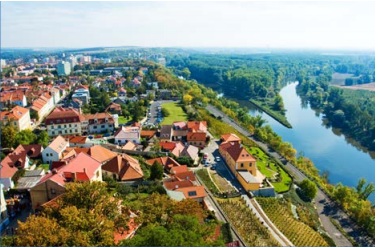 10. The confluence of two rivers 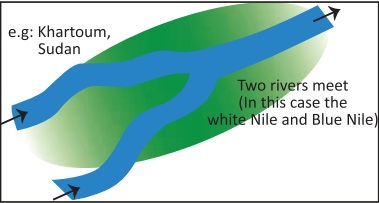 In the UK, Birmingham is an example of a city with excellent situation. It is located central to the country, with excellent links by road to the North and South to London. 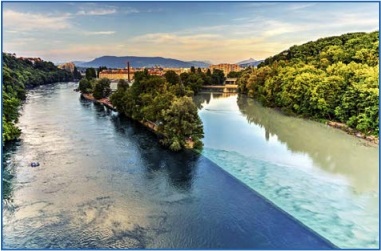 As cities begin to fulfill different functions their importance can increase or decrease. Their situation plays an important part in deciding which of these functions will occur.

It refers to the location of the actual settlement. The initial choice of a site for a settlement depends on its meeting certain daily needs such as water supply, availability of potential farmland, building materials and fuels etc.

ii. Generally the rural areas have low density of population than urban areas.

iii. Urban settlements are defined by their advanced civic amenities, opportunities for education, and facilities for transport, business and social interaction and overall better standard of living whereas rural areas lack of such amenities.

iv. Rural areas do not have pollution or traffic problems that beset regular urban areas.