1. Distinguish between Nanoscience and Nanotechnology. 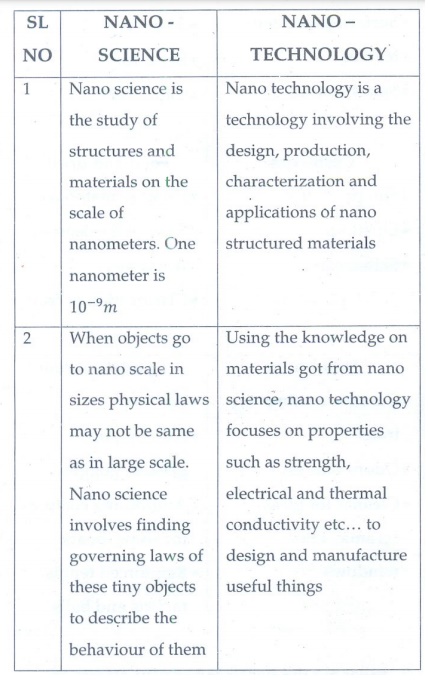 1. Nano science is the study of structures and materials on the scale of nanometers. One nanometer is 10-9m

2. When objects go to nano scale in sizes physical laws may not be same as in large scale. Nano science involves finding governing laws of these tiny objects to describe the behaviour of them

1. Nano technology is a technology involving the design, production, characterization and applications of nano structured materials

2. Using the knowledge on materials got from nano science, nano technology focuses on properties such as strength, electrical and thermal conductivity etc... to design and manufacture useful things

2. What is the difference between Nano materials and Bulk materials? 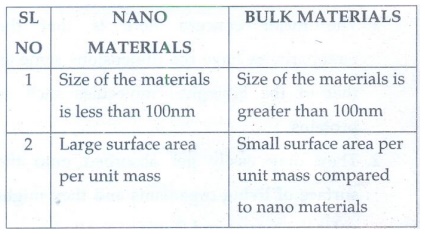 1. Size of the materials is less than l00 nm

1. Size of the materials is greater than 100 nm

3. Give any two examples for “Nano” in nature.

❖ Scales on the wings of a morph butterfly.

4. Mention any two advantages and disadvantages of Robotics.

❖ Much cheaper than humans

❖ Stronger and faster than humans

❖ They have no sense of emotions or conscience

5. Why steel is preferred in making Robots?

Robot bodies are made using sheet, bar, rod and other shapes with steel because the steel is several times stronger than aluminium.

6. What are black holes?

Black holes are end stage of stars which are highly dense massive objects. Its mass ranges from 20 times to 1 million times mass of the sun.

It has very strong gravitational force such that any particle or even light can not escape from it.

Every galaxy has black hole at its centre.

7. What are sub atomic particles?

The particles which are present inside the nucleus of an atom and electrons surrounding the nucleus are called subatomic particles.

Some other subatomic particles are Quark, gluons, Higgs particles.