Nanoscience is the study of structures and materials on the scale of nanometers. Nano means one-billionth of a meter that is 10 pow(-9) m. Nanotechnology is a technology involving the design, production, characterization, and applications of nano structured materials.

Nanoscience is the study of structures and materials on the scale of nanometers. Nano means one-billionth of a meter that is 10-9 m.

If matter is divided into such small objects the mechanical, electrical, optical, magnetic and other properties change.

Nanotechnology is a technology involving the design, production, characterization, and applications of nano structured materials.

The solids are made up of particles. Each of the particle has a definite number of atoms, which might differ from material to material. If the particle of a solid is of size less than 100 nm, it is said to be a 'nano solid. When the particle size exceeds 100 nm, it is a 'bulk solid. It is to be noted that nano and bulk solids may be of the same chemical composition. For example, ZnO can be both in bulk and nano form. Though chemical composition is the same, nano form of the material shows strikingly different properties when compared to its bulk counterpart.

In the nano scale dimensions (reduced dimensions), two important phenomena govern nano properties. They are quantum confinement effects and surface effects. Students can explore these effects in higher education and the explanation is avoided at school level. 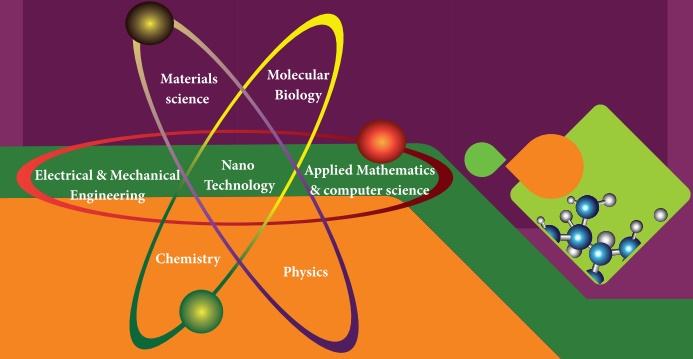 Nanoscale structures existed in nature long before scientists began studying them in laboratories. 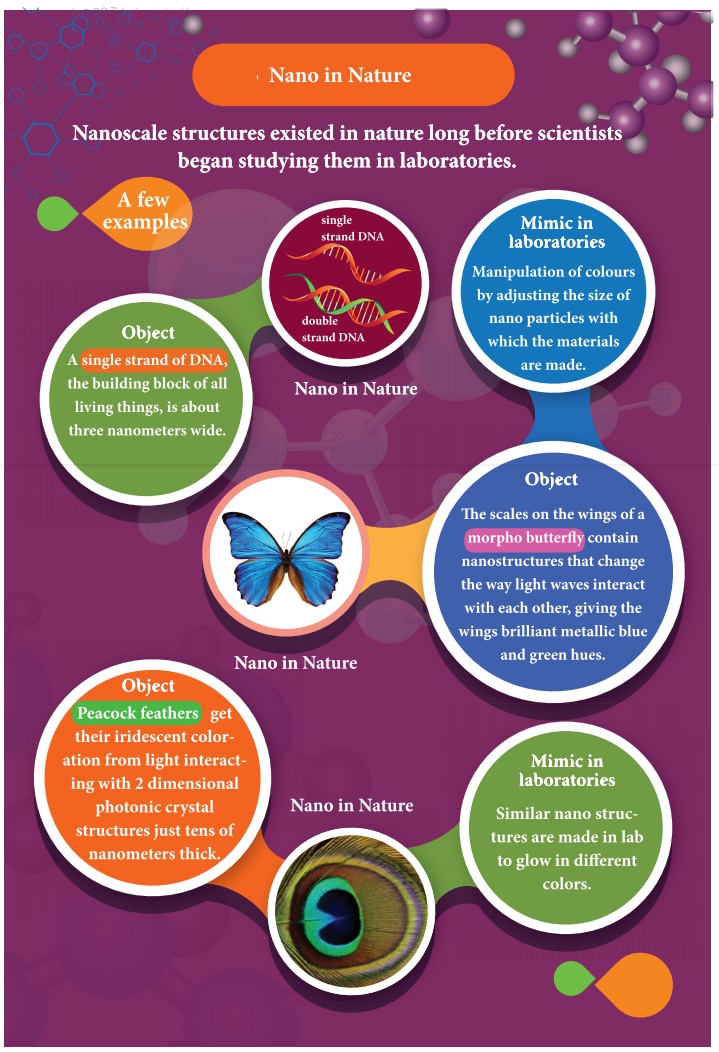 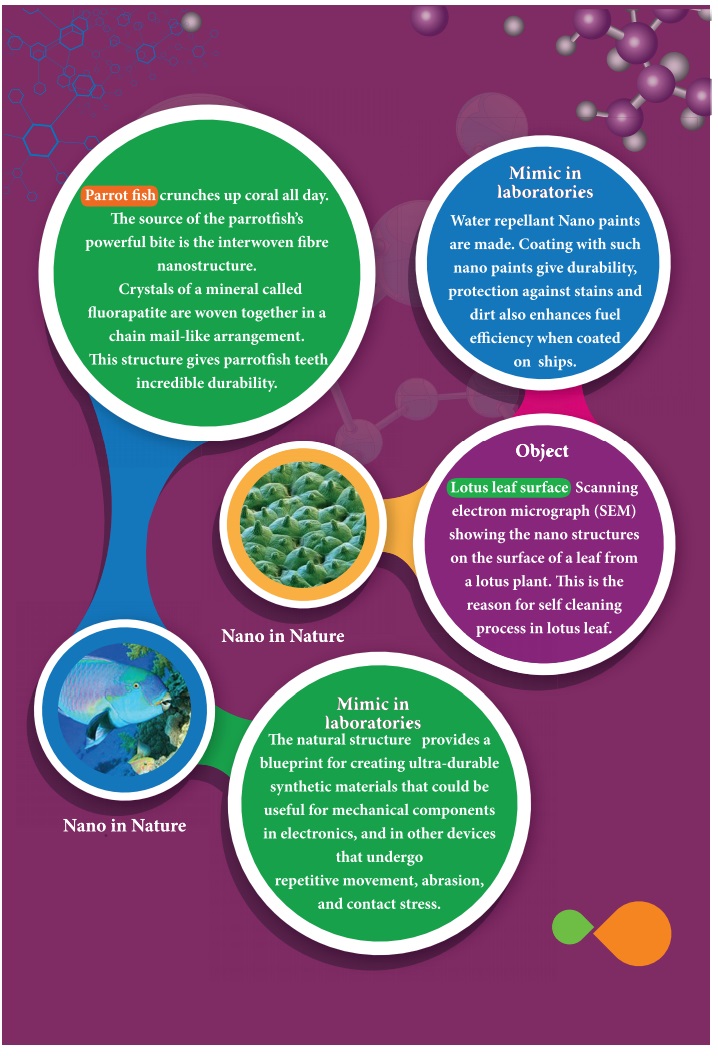 A single strand of DNA, the building block of all living things, is about three nanometers wide.

The scales on the wings of a morpho butterfly contain nanostructures that change the way light waves interact with each other, giving the wings brilliant metallic blue and green hues.

Manipulation of colours by adjusting the size of nano particles with which the materials are made.

Similar nano struclures are made in lab to glow in different colors.

Parrot fish crunches up coral all day. The source of the parrotfish's powerful bite is the interwoven fibre nanostructure. Crystals of a mineral called fluorapatite are woven together in a chain mail-like arrangement. This structure gives parrotfish teeth incredible durability.

The natural structure provides a blueprint for creating ultra-durable synthetic materials that could be useful for mechanical components in electronics, and in other devices that undergo repetitive movement, abrasion, and contact stress.

Lotus leaf surface Scanning electron micrograph (SEM) showing the nano structures on the surface of a leaf from a lotus plant. This is the reason for self cleaning process in lotus leaf.

Water repellant Nano paints are made. Coating with such nano paints give durability, protection against stains and dirt also enhances fuel efficiency when coated on ships.

Early beginning and development (Not for examination) 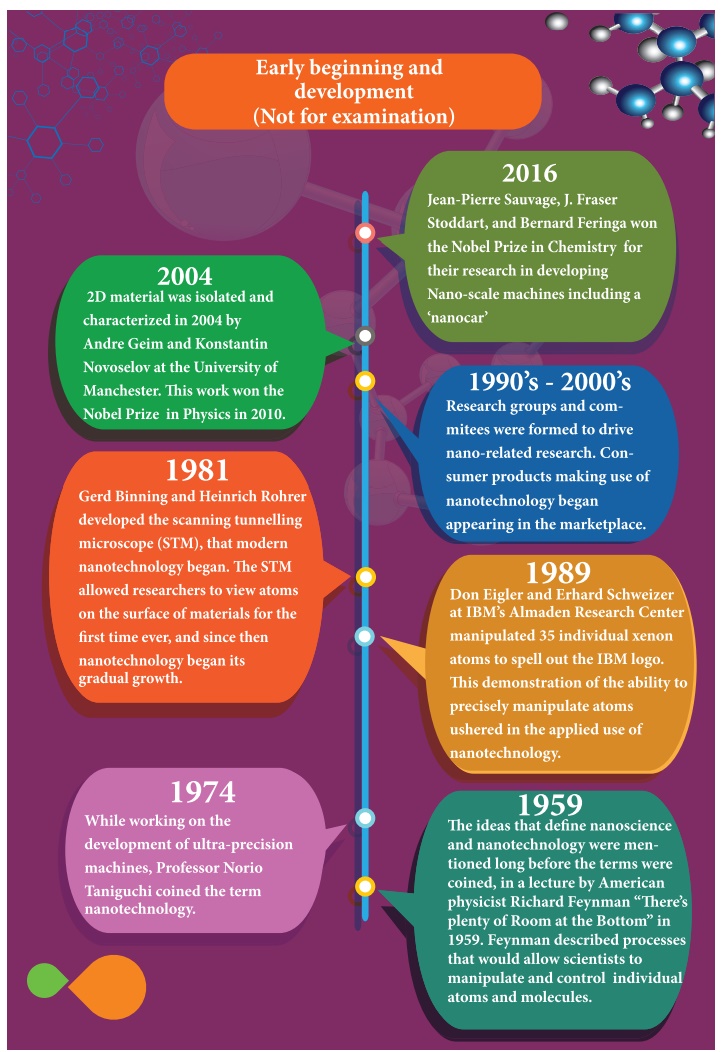 Jean-Pierre Sauvage, J. Fraser Stoddart, and Bernard Feringa won the Nobel Prize in Chemistry for their research in developing Nano-scale machines including a 'nanocar

2D material was isolated and characterized in 2004 by Andre Geim and Konstantin Novoselov at the University of Manchester. This work won the Nobel Prize in Physics in 2010.

Research groups and com mitees were formed to drive nano-related research. Consumer products making use of nanotechnology began appearing in the marketplace.

Gerd Binning and Heinrich Rohrer developed the scanning tunnelling microscope (STM), that modern nanotechnology began. The STM allowed researchers to view atoms on the surface of materials for the first time ever, and since then nanotechnology began its gradual growth.

Don Eigler and Erhard Schweizer at IBM's Almaden Research Center manipulated 35 individual xenon atoms to spell out the IBM logo. This demonstration of the ability to precisely manipulate atoms ushered in the applied use of nanotechnology.

While working on the development of ultra-precision machines, Professor Norio Taniguchi coined the term nanotechnology.

The ideas that define nanoscience and nanotechnology were men tioned long before the terms were coined, in a lecture by American physicist Richard Feynman "There's plenty of Room at the Bottom" in 1959. Feynman described processes that would allow scientists to manipulate and control individual atoms and molecules.

The nanostructures made in the laboratory mimic some of nature's amazing nanostructures. As the nanostructures are so small, specialized methods are needed to manufacture objects in this size range. There are two ways of preparing the nanomaterials, top down and bottom up approaches. 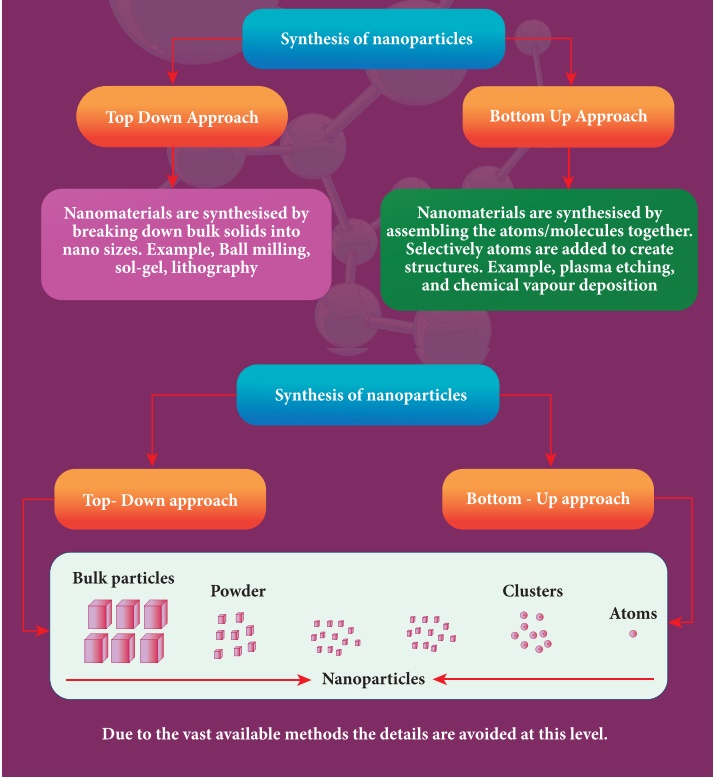 Bottom Up Approach: Nanomaterials are synthesised by assembling the atoms/molecules together. Selectively atoms are added to create structures. Example, plasma etching, and chemical vapour deposition 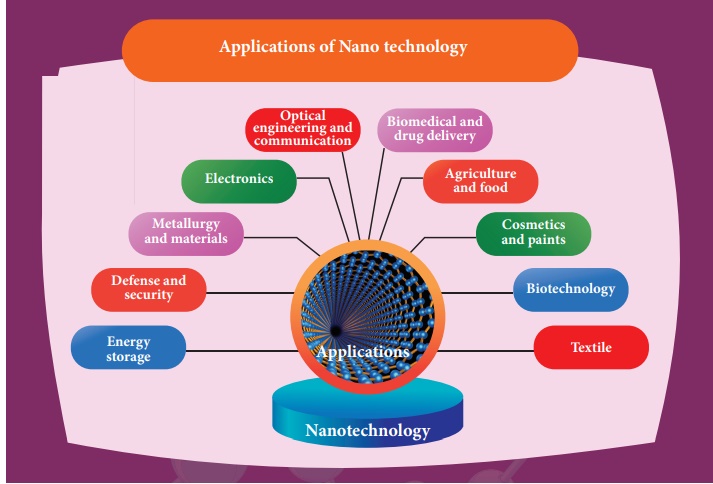 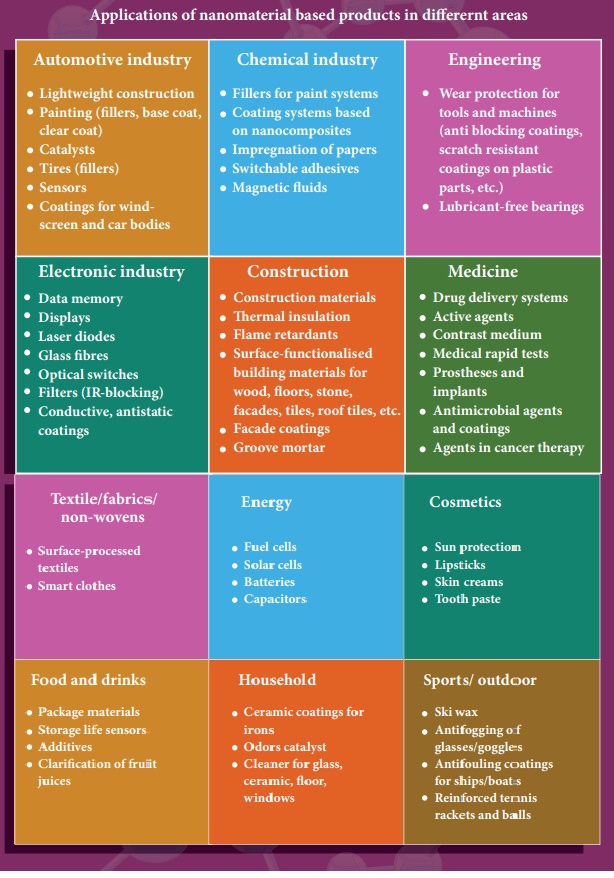 Applications of nanomaterial based products in different areas

• Coating systems based on nanocomposites

The research on the harmful impact of application of nanotechnology is also equally important and fast developing. The major concern here is that the nanoparticles have the dimensions same as that of the biological molecules such as proteins. They may easily get absorbed onto the surface of living organisms and they might enter the tissues and fluids of the body.

The interaction with living systems is also affected by the dimensions of the nanopar- ticles. For instance, nanoparticles of a few nanometers size may reach well inside biomolecules, which is not possible for larger nanoparticles. Nanoparticles can also cross cell membranes. It is also possible for the inhaled nanoparticles to reach the blood, to reach other sites such as the liver, heart or blood cells.

Researchers are trying to understand the response of living organisms to the pres- ence of nanoparticles of varying size, shape, chemical composition and surface characteristics. 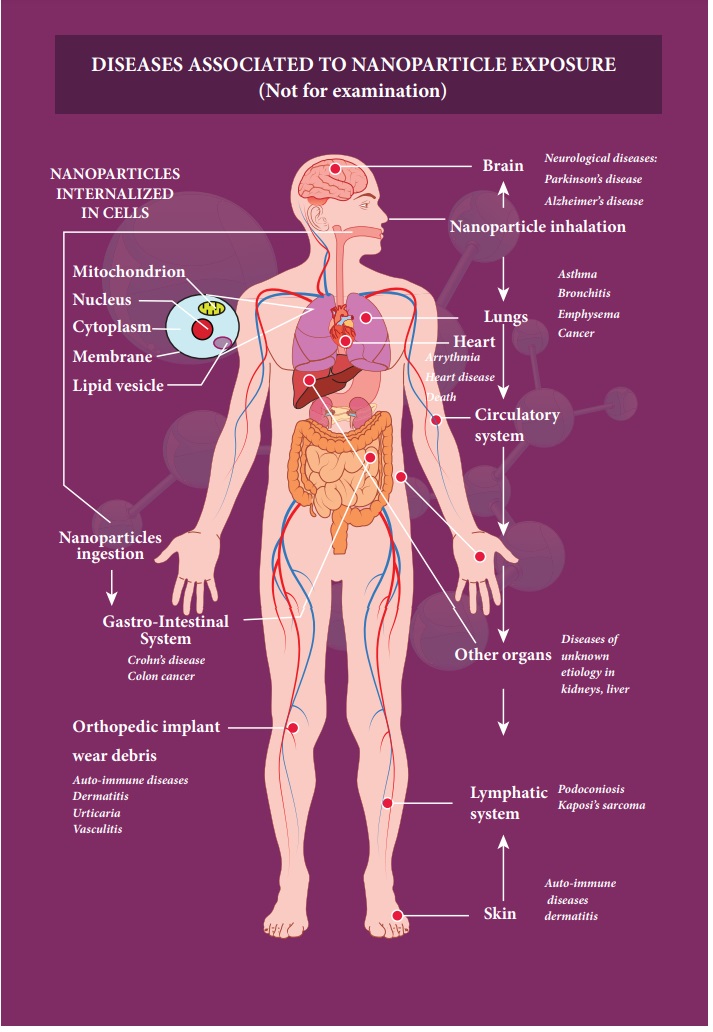