Shapers and Types of Shapers

Shaping is performed on a machine tool called a shaper. The major components of a shaper are the ram, which has the tool post with cutting tool mounted on its face, and a worktable, which holds the part and accomplishes the feed motion.

Shaping is performed on a machine tool called a shaper. The major components of a shaper are the ram, which has the tool post with cutting tool mounted on its face, and a worktable, which holds the part and accomplishes the feed motion.

A shaper is a type of machine tool that uses linear relative motion between the workpiece and a single-point cutting tool tomachine a linear toolpath. Its cut is analogous to that of a lathe, except that it is (archetypally) linear instead of helical. (Adding axes of motion can yield helical toolpaths, as also done in helical planing.) A shaper is analogous to a planer, but smaller, and with the cutter riding a ram that moves above a stationary workpiece, rather than the entire workpiece moving beneath the cutter. The ram is moved back and forth typically by a crank inside the column; hydraulically actuated shapers also exist. 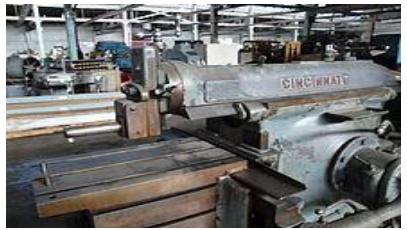 Shapers are mainly classified as standard, draw-cut, horizontal, universal, vertical, geared, crank, hydraulic, contour and traveling head.[1] The horizontal arrangement is the most common. Vertical shapers are generally fitted with a rotary table to enable curved surfaces to be machined (same idea as in helical planing). The vertical shaper is essentially the same thing as a slotter (slotting machine), although technically a distinction can be made if one defines a true vertical shaper as a machine whose slide can be moved from the vertical. A slotter is fixed in the vertical plane.

Small shapers have been successfully made to operate by hand power. As size increases, the mass of the machine and its power requirements increase, and it becomes necessary to use a motor or other supply of mechanical power. This motor drives a mechanical arrangement (using a pinion gear, bull gear, and crank, or a chain over sprockets) or a hydraulic motor that supplies the necessary movement via hydraulic cylinders.

The workpiece mounts on a rigid, box-shaped table in front of the machine. The height of the table can be adjusted to suit this workpiece, and the table can traverse sideways underneath the reciprocating tool, which is mounted on the ram. Table motion may be controlled manually, but is usually advanced by an automatic feed mechanism acting on the feedscrew.

The ram slides back and forth above the work. At the front end of the ram is a vertical tool slide that may be adjusted to either side of the vertical plane along the stroke axis. This tool-slide holds the clapper box and toolpost, from which the tool can be positioned to cut a straight, flat surface on the top of the workpiece. The tool-slide permits feeding the tool downwards to deepen a cut. This adjustability, coupled with the use of specialized cutters and toolholders, enable the operator to cut internal and external gear tooth profiles, splines, dovetails, and keyways.

The most common use is to machine straight, flat surfaces, but with ingenuity and some accessories a wide range of work can be done. Other examples of its use are:

·       Keyways in the boss of a pulley or gear can be machined without resorting to a dedicated broaching setup.

·       It is even possible to obviate wire EDM work in some cases. Starting from a drilled or cored hole, a shaper with a boring-bar type tool can cut internal features that don't lend themselves to milling or boring (such as irregularly shaped holes with tight corners).