Gears can be manufactured by most of manufacturing processes discussed so far (casting, forging, extrusion, powder metallurgy, blanking).

Gears can be manufactured by most of manufacturing processes discussed so far (casting, forging, extrusion, powder metallurgy, blanking). But as a rule, machining is applied to achieve the final dimensions, shape and surface finish in the gear. The initial operations that produce a semi finishing part ready for gear machining as referred to as blanking operations; the starting product in gear machining is called a gear blank.

Each method includes a number of machining processes, the major of them included in this section.

In gear form cutting, the cutting edge of the cutting tool has a shape identical with the shape of the space between the gear teeth. 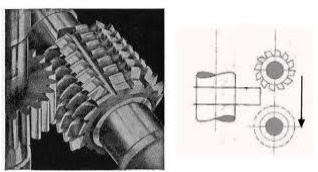 In form milling, the cutter called a form cutter travels axially along the length of the gear tooth at the appropriate depth to produce the gear tooth. After each tooth is cut, the cutter is withdrawn, the gear blank is rotated (indexed), and the cutter proceeds to cut another tooth. The process continues until all teeth are cut.

Each cutter is designed to cut a range of tooth numbers. The precision of the form-cut tooth profile depends on the accuracy of the cutter and the machine and its stiffness. In form milling, indexing of the gear blank is required to cut all the teeth. Indexing is the process of evenly dividing the circumference of a gear blank into equally spaced divisions. The index head of the indexing fixture is used for this purpose. 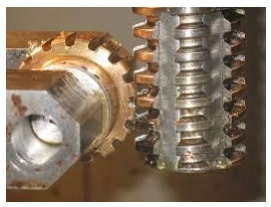 Gear hobbing is a machining process in which gear teeth are progressively generated by a series of cuts with a helical cutting tool (hob). All motions in hobbing are rotary, and the hob and gear blank rotate continuously as in two gears meshing until all teeth are cut when bobbing a spur gear, the angle between the hob and gear blank axes is 90° minus the lead angle at the hob threads. For helical gears, the hob is set so that the helix angle of the hob is parallel with the tooth direction of the gear being cut. Additional movement along the tooth length is necessary in order to cut the whole tooth length: The action of the hobbing machine (also gear hobber) is shown in the figures. The cutting of a gear by means of a hob is a continuous operation. The hob and the gear blank are connected by a proper gearing so that they rotate in mesh. To start cutting a gear, the rotating hob is fed inward until the proper setting for tooth depth is achieved, then cutting continues until the entire gear is finished.

The gear hob is a formed tooth milling cutter with helical teeth arranged like the thread on a screw. These teeth are fluted to produce the required cutting edges.