Each year, some 365,000 women in the United States experience sexual assault, rape, or attempted rape. An es-timated 1 in 6 women have experienced sexual assault in their lifetimes. However, most do not file a complaint or report and, thus, its true prevalence is unknown. In the years between 1992 and 2000, 63% percent of completed rapes, 65% of attempted rapes, and 74% of completed and attempted sexual assaults against females were not re-ported to the police. Because of the complex problems caused by sexual assault, treatment is best managed by a multidisciplinary team that fulfills the following roles:

·            Care for the victim’s emotional needs, acute and (ifpossible within the constraints of the healthcare system) long-term

Definitions and Types of Sexual Assault

Sexual assault occurs in all age, racial, and socioeconomic groups; the very young, handicapped, and the very old are particularly susceptible. Although the act may be com-mitted by a stranger, in many cases it is committed by an acquaintance.

Some situations have been defined as variants of sexual assault. Marital rape is defined as forced coitus or related sexual acts within a marital relationship without the consent of a partner; it often occurs in conjunction with and as part of physical abuse in cases of domestic or intimate-partner violence.

Date rape or acquaintance rape is another manifes-tation of intimate-partner violence. In this situation, a woman may voluntarily participate in sexual play, but coitus occurs, often forcibly, without her consent. Date rape often goes unreported, because the woman may think that she contributed to the act by participating up to a point or that she will not be believed. Lack of consent also may occur in situations where cognitive function is im-paired by flunitrazepam, alcohol, or other drugs; sleep; in-jury with unconsciousness; or developmental delay.

All states have statutory rape statutes criminalizing sexual intercourse with a girl younger than a specific age, because she is defined, by statute, as being incapable of consenting. Many states also have laws addressing aggra-vated criminal sexual assault, which has the following attributes: weapons are used, lives are endangered, or phys-ical violence is inflicted; the act is committed in relation-ship to another felony; or the woman is older than 60 years, physically handicapped, or mentally retarded.

Clinicians evaluating women in the acute phase who have experienced sexual assault have a number of responsi-bilities, both medical and legal (Table 48.1). They should be familiar with state rape and assault laws, and comply with any legal requirements regarding reporting and the collec-tion of evidence. They also must be aware that every state and the District of Columbia require physicians to report child abuse, including sexual assault against children and adolescents. Physicians should be familiar with any state laws regarding the reporting of statutory rape. Additionally, physicians should be aware of local protocols regarding the use of specially trained sexual assault forensic examiners or sexual assault nurse examiners. Specific responsibilities are determined by the patient’s needs and by state law. 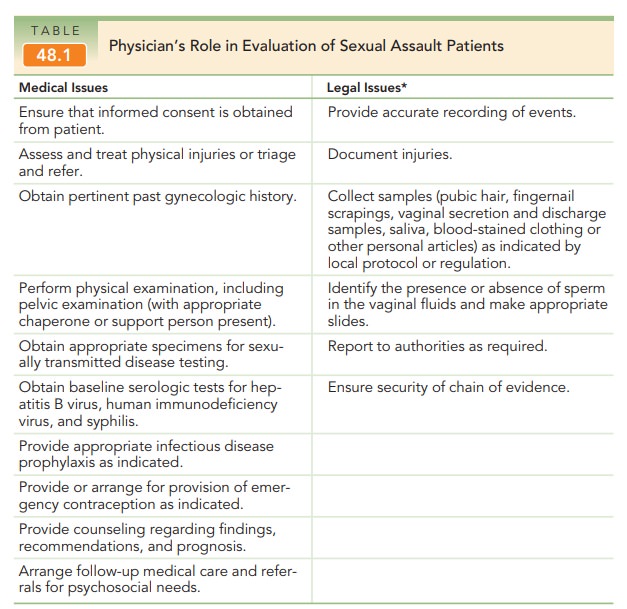 The clinician should provide medical and counseling services, inform the patient of her rights, refer her to legal assistance, and help her develop prevention strategies to avoid future assault. Many jurisdictions and several clinics have developed a sexual assault assessment kit, which lists the steps necessary and the items to be obtained so that as much information as possible can be prepared for forensic purposes. Many clinics have nurses who are trained to col-lect needed samples and information. If these individuals are available, it is appropriate to request their assistance. Rape crisis counselors and centers also can provide valuable support. In addition, the clinician must assess and treat all injuries, perform sexually transmitted disease (STD) screen-ing, and provide prophylaxis against infectious diseases and unintended pregnancy.

When a woman who has experienced sexual assault communicates with the physician’s office, emergency room, or clinic before pre-senting for evaluation, she should be encouraged to come immedi-ately to a medical facility and be advised not to bathe, douche, urinate, defecate, wash out her mouth, clean her fingernails, smoke, eat, or drink.

In recent years, there has been a trend toward the im-plementation of hospital-based programs to provide acute medical and evidentiary examinations by sexual assault nurse examiners or sexual assault forensic examiners. Physi-cians play a role in the policy and procedure development and implementation of these programs, and serve as sources for referral, consultation, and follow-up. In some parts of the country, however, obstetrician–gynecologists will still be the first point of contact for evaluation and care in the acute aftermath of a sexual assault. In addition, virtually all obstetrician–gynecologists will be called on to perform evaluations and, if conducting screening for history of sex-ual assault, will realize the utility of this information to the conduct of primary-care and specialty-care practice.

In an optimal situation, the woman is able to seek care in a facility where there is a trained multidisciplinary team. A team member should remain with the patient to help provide a sense of safety and security and, thereby, begin the therapeutic process, including, specifically, assurance of the patient’s lack of guilt. The patient should be encouraged,in a supportive, nonjudgmental manner, to talk about the assault and her feelings. Treatment for life-threatening traumaneeds to begin immediately. Such trauma is uncommon, although minor trauma is seen in one-fourth of victims. Even in life-threatening situations, any sense of control that can be given the patient is helpful. Obtaining consent for treatment is not only a legal requirement, but also an important aspect of the emotional care of the patient, by helping her participate in regaining control of her body and her circumstances.

Although patients are commonly reluctant to do so, they should be gently encouraged to work with the police, because such cooperation is clearly associated with im-proved emotional outcomes for victims.

History taking about a sexual assault is necessary to gain medical and forensic information, and is as well an important therapeutic activity. Recalling the details of the assault in the supportive environment of the healthcare setting allows the victim to begin to gain an understand-ing of what has happened and to start emotional healing (see Box 48.1.). 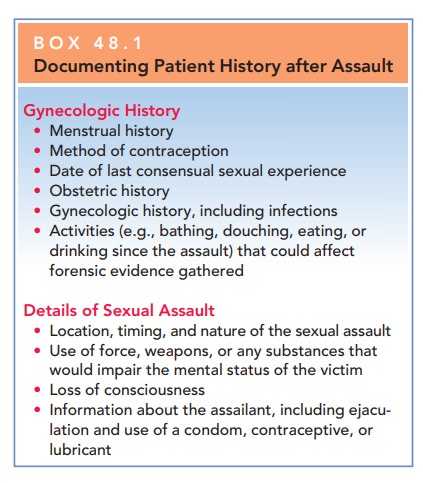 Activities (e.g., bathing, douching, eating, or drinking since the assault) that could affect forensic evidence gathered

Location, timing, and nature of the sexual assault

Use of force, weapons, or any substances that would impair the mental status of the victim

Information about the assailant, including ejacu-lation and use of a condom, contraceptive, or lubricant

Victims of sexual assault should be given a complete general physical examination, including a pelvic examina-tion. Forensic specimens should be collected, and cultures for STDs should be obtained. When collecting forensic specimens, it is critical that the clinician follow the direc-tions on the forensic specimens kit. These specimens are kept in a health professional’s possession or control until turned over to an appropriate legal representative. This “protective custody” of the specimens ensures that the correct specimen reaches the forensic laboratory and is called the “chain of evidence.”

Initial laboratory tests should include cultures from the vagina, anus, and pharynx for STDs. Collection of serum for rapid plasma reagin (RPR) for syphilis, hepati-tis antigens, and human immunodeficiency virus (HIV) are needed. Urinalysis, culture and sensitivity, as well as a pregnancy test for menstrual-age women (regardless of contraceptive status) are collected. Antibiotic prophy-laxis should be offered to all adult patients. Emergency contraception should be offered and is described on contraception (see Table 48.2). 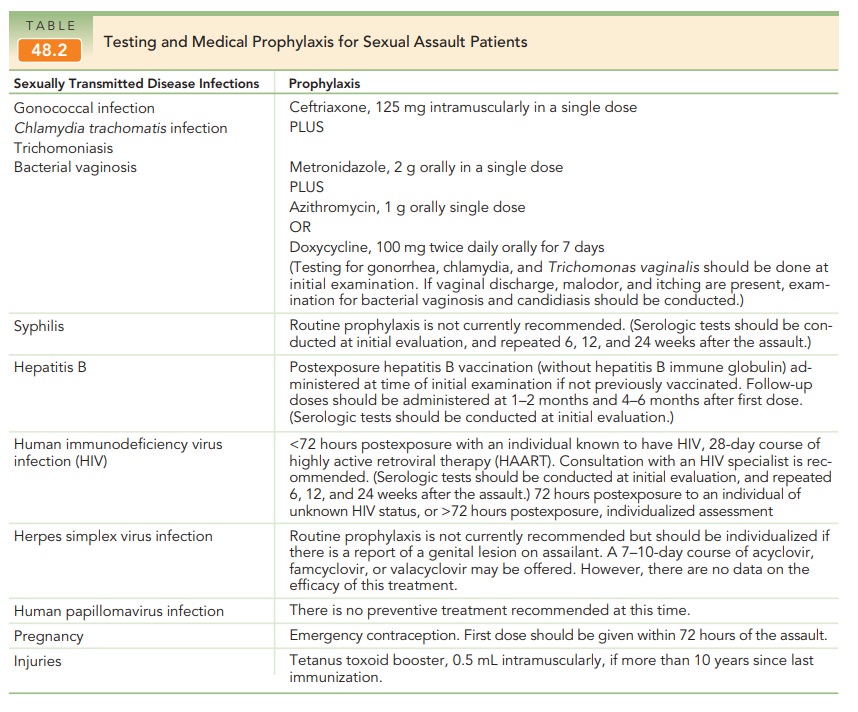 Within 24 to 48 hours of disclosure and initial treatment, victims should be contacted by phone or seen for an immediate post-treatment evaluation. At this time, emotional or physi-cal problems are managed and follow-up appointments arranged. Potentially serious problems, such as suicidal ideation, rectal bleeding, or evidence of pelvic infection, may go unrecognized by the victim during this time because of fear or continued cognitive dysfunction. Specific questions must be asked to ensure that such problems have not arisen.

At the 1-week follow-up visit, a general review of the pa-tient’s progress is made and any specific new problems addressed.

The next routine visit is at 6 weeks, when a com-plete evaluation, including physical examination, repeat cultures for sexually transmitted diseases, and a repeat RPR is performed. Another visit at 12 to 18 weeks may be indicated for repeat HIV titers, although the current un-derstanding of HIV infection does not allow an estimate of the risk of exposure for sexual assault victims. Each vic-tim should receive as much counseling and support as is necessary, with referral to a long-term counseling pro-gram if needed.

If the physician is not directly involved in the acute care of the victim, it is helpful for him or her to obtain records of the patient’s emergency evaluation. These enable the physician to be certain that all appropriate testing was per-formed and to provide the patient with full results. Patients may be disturbed to learn that the results of their forensic evaluation are usually not provided to their physician. In this situation, it is helpful to refer the patient to local legal or police authorities, who can also be helpful in answering patients’ questions about the health status of the assailant and whether the assailant was apprehended.

A woman who is sexually assaulted loses control over her life during the period of the assault. Her integrity, and sometimes her life, is threatened. She may experience in-tense anxiety, anger, or fear. After the assault, a “rape-trauma” syndrome commonly occurs, comprising two phases:

·            Signs may include generalized pain throughout the body; headache; eating and sleep disturbances; and emotional symptoms, such as depression, anxiety, and mood swings.

·            Characterized by flashbacks, nightmares, and phobias as well as somatic and gynecologic symptoms

·            Often occurs months or years after the event, and may involve major life adjustments

This rape-trauma syndrome is similar to a grief reaction in many respects. As such, it can only be resolved when the victim has emotionally worked through the trauma and personal loss related to the event and replaced it with other life experiences. An inability to think clearly or rememberthings such as her past medical history, termed “cognitive dys-function,” is a particularly distressing aspect of the syndrome.The involuntary loss of cognition may raise fears of “being crazy” or of being perceived as “crazy” by others. It is also frustrating for the healthcare team, unless it is recognized that this is an involuntary, temporary, and understandable reaction to the emotionally intolerable nature of the sexual assault and not a willful action.

Avoiding reminders of the event constitutes another symp-tom cluster in posttraumatic stress disorder. These women become emotionally numb, withdrawing from friends and family and losing interest in everyday activities. There may be an even deeper reaction of denial of awareness that the event actually happened.

Symptoms such as easy startling, being hypervigilant, irritability, sleep disturbances, and lack of concentration are part of a third symptom cluster known as hyper-arousal. These women often will have a number of co-occurring conditions, such as depression, dissociative disorders (los-ing conscious awareness of the present, or “zoning out”), addictive disorders, and many physical symptoms.