In the story "Seventeen Oranges" let us see if the narrator is able to cleverly manage a tricky situation or not.

In the story "Seventeen Oranges" let us see if the narrator is able to cleverly manage a tricky situation or not.

Oranges! I was fond of them. I used to eat them all day and every day. But one day a police man found seventeen oranges hidden away in my pockets. He locked me up and I have never eaten an orange again.

I want to tell you the story.

was driving a little pony-and-cart for the Swift Delivery Company, and I often went in and out of the docks.

* Where did the narrator work?

The narrator worked in the ship yard.

* What was the narrator’s job in the docks?

The narrator went in and out of the docks to carry and deliver the goods.

I was not really a thief. But I usually left the docks with something under my apron. I had made the apron myself and it was a big one.

When there was a banana boat in the docks, I drove my little cart beside it. Sometimes bunches of bananas fell to the ground. Often my friends kicked a bunch to me from the boat. I always picked up the bananas quickly and hid them under my apron.

Then I spent the rest of the day eating bananas. I liked bananas, but I like oranges best of all.

I only took things when I found them. But some people planned a theft very carefully. Clem Jones was a careful planner. Let me tell you about Clem.

One day Clem was coming out of the docks. He was carrying a box. ‘What have you got in here?’ asked Pongo the policeman.

‘A cat,’ replied Clem. ‘Please don’t make me open the box. The cat will run away.’

‘But the cat will run away,’ Clem said again.

Clem got very angry, but finally opened his box. Out jumped a ship’s cat. The cat ran back into the docks. Clem ran after the cat. He was shouting angrily.

* What was Clem Jones carrying in the box?

Clem Jones was carrying a ship's cat in the box.

*What happened when the box was opened?

When the box was opened a ship's cat jumped out and ran back into the docks.

Two minutes later, Clem came back with the same box. He was holding the lid down tightly. Pongo laughed at him and Clem looked at him furiously. Clem looked angry all the way home. Then he smiled. He opened the box in the kitchen and took out a large Dutch cheese. 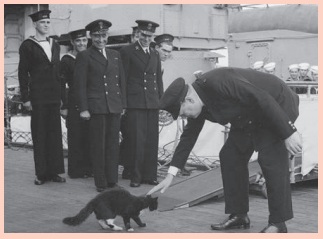 A ship’s cat is a cat that rides along on trading, exploration and naval ships to catch mice and rats which can cause damage to ropes, electrical wirings, crew’s food, grains in the cargo and wooden parts of the ship.

That was Clem’s story. But I was not so lucky. Pongo, the policeman, caught me red-handed because my apron string broke. He noticed that my trouser pockets were somewhat bulging. 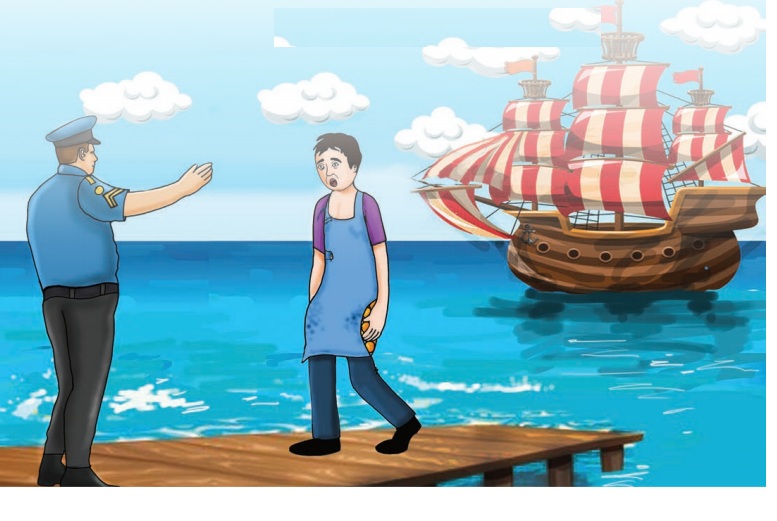 He caught me by the collar, took me into his cabin nearby and looked into my pockets. There were seventeen oranges. Pongo counted them and placed them carefully on the table.

‘Too many people are stealing from the docks,’ Pongo said, ‘You’ve stolen these oranges and concealed them in your pocket. Have you anything to say?’

* Did the narrator believe Clem’s story?

* What was the narrator carrying in his pockets?

The narrator.was carrying oranges in his pockets.

Pongo is a police security officer.

I said nothing. I was very frightened, but I kept quiet. I had read a lot of detective stories to make the mistake of blabbing. Anything you say may be used as evidence against you. I knew that the best plan was to say nothing.

‘So you won’t say anything,’ said Pongo. ‘I’m going to bring another policeman here. He’ll be a witness against you, when I bring up this case in the court.’

Pongo left the cabin and locked the door behind him. I was very worried.

I’ll lose my job, I thought. Perhaps I’ll go to prison. What will my father say?

What will my father do?

I almost gave up the hope of escaping from the trouble. I was locked in the cabin and the oranges were on the table. Pongo had gone to bring a witness. I was in trouble.

‘Eat the oranges', said a voice in my head. ‘Eat the evidence.’

‘Yes,’ said the voice in my head. ‘Eat them and the evidence will be gone. Be quick! Eat them all.’

* Why did Pongo want to bring another policeman?

Pongo wanted to bring another policeman to get a witness for the case.

* What did the voice in the narrator’s head tell him to do?

The voice in the narrator's head told him to swallow pips and the peels quickly.

I thought for half a second. Then I took an orange. I peeled it and put it in my mouth. Soon, only the pips were left. 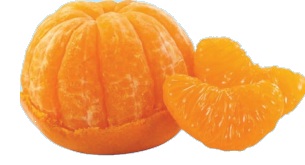 One orange contains our daily requirement of vitamin C.

Oranges were first grown in India and then they spread to the other parts of the world.

I swallowed the pips and put some of the peel in my mouth.

I took a small knife from my pocket and cut the oranges into large chunks. I swallowed the pieces of oranges one after the other.

There were still three oranges on the table when I heard Pongo outside. I stopped. My stomach was nearly full.

‘Be quick! Swallow them!’ said the voice in my head.

I was lucky. Pongo and the other policeman had seen some carts at the dock gate. They went and talked to the drivers. This gave me a few more minutes.

I must swallow all the oranges, I thought. Only three left!

I swallowed the first one, and then the second one. 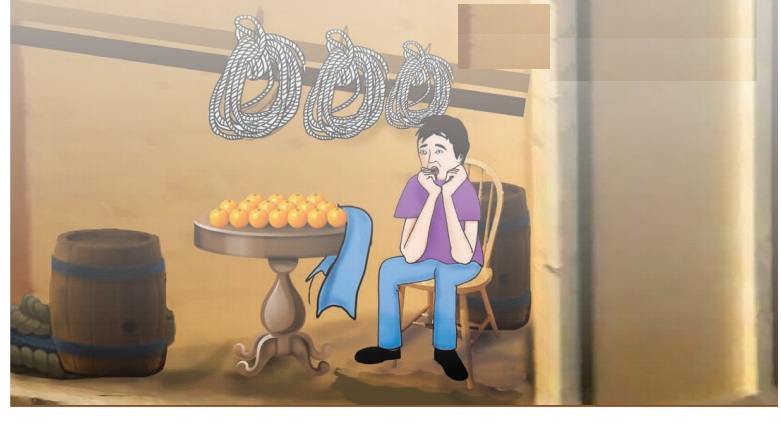 Suddenly the door began to open. I went through a great deal of struggle and finally managed to finish off the last piece of the last orange. Pongo and the other policeman walked in.

‘This is the thief.’ Pongo said. ‘I caught him with his pockets full of oranges.’

* Why did the policemen arrive a little late to the cabin?

The policemen had seen some carts at the gate. They went and talked to the drivers. So they arrived a little late to the cabin.

* What did the narrator do with the pips and peels?

The narrator swallowed all the pips and peels of the oranges.

Then Pongo looked at the table and at first, he could not figure out what had happened. ‘Where are the oranges?’

‘I can smell them,’ said the other policeman. 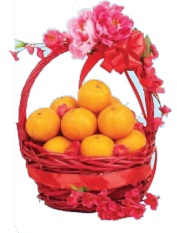 Giving oranges during their New Year season is a festive ritual of the Chinese. They are usually given in pairs as a symbol of friendship.

Finally, Pongo understood what had happened. But it was very difficult to believe.

‘Seventeen oranges!’, he said. ‘Seventeen big oranges! How did you eat them all?’

I said nothing. Pongo was not able to send me to prison. There was no evidence.

Pongo became angry and shouted at me. But I didn’t say a word. In the end, he had to let me go.

I told Clem Jones about the seventeen oranges.

‘Pongo locked you in that cabin for half an hour,’ said Clem. ‘He had no right to do that.’

Perhaps Clem was right. I don’t know. I didn’t have time to think about it. I had eaten seventeen large oranges – peels, pips and all. I felt very sick for a week and those oranges kept working away in my stomach. 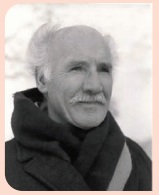 William John Francis Naughton, known as Bill Naughton (1910-1992) was an Irish-born British playwright and author. He worked as a weaver, coal-bagger and lorry-driver before he started writing. His preferred environment was working class society, which is reflected in much of his work. He wrote many novels, short stories, plays and children’s books. He is best known for the play Alfie. His 1977, children’s novel My Pal Spadger is an account of his childhood in 1920s Bolton.