Serialization is also needed to implement Remote Method Invocation (RMI). RMI allows a Java object on one machine to invoke a method of a Java object on a different machine. An object may be supplied as an argument to that remote method. The sending machine serializes the object and transmits it. The receiving machine deserializes it. (More information about RMI appears in Chapter 30.)

Assume that an object to be serialized has references to other objects, which, in turn, have references to still more objects. This set of objects and the relationships among them form a directed graph. There may also be circular references within this object graph. That is, object X may contain a reference to object Y, and object Y may contain a reference back to object X. Objects may also contain references to themselves. The object serialization and deserialization facilities have been designed to work correctly in these scenarios. If you attempt to serialize an object at the top of an object graph, all of the other referenced objects are recursively located and serialized. Similarly, during the process of deserialization, all of these objects and their references are correctly restored.

An overview of the interfaces and classes that support serialization follows.

Variables that are declared as transient are not saved by the serialization facilities. Also, static variables are not saved.

The Java facilities for serialization and deserialization have been designed so that much of the work to save and restore the state of an object occurs automatically. However, there are cases in which the programmer may need to have control over these processes. For example, it may be desirable to use compression or encryption techniques. The Externalizable interface is designed for these situations.

The ObjectOutput interface extends the DataOutput and AutoCloseable interfaces and supports object serialization. It defines the methods shown in Table 20-6. Note especially the writeObject( ) method. This is called to serialize an object. All of these methods will throw an IOException on error conditions.

The argument outStream is the output stream to which serialized objects will be written. Closing an ObjectOutputStream automatically closes the underlying stream specified by outStream.

Several commonly used methods in this class are shown in Table 20-7. They will throw an IOException on error conditions. There is also an inner class to ObjectOuputStream called PutField. It facilitates the writing of persistent fields, and its use is beyond the scope of this book. 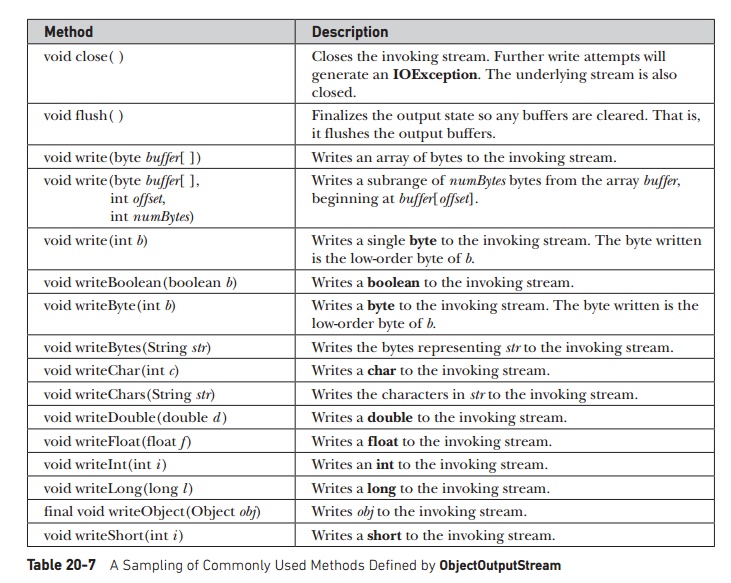 The ObjectInput interface extends the DataInput and AutoCloseable interfaces and defines the methods shown in Table 20-8. It supports object serialization. Note especially the readObject( ) method. This is called to deserialize an object. All of these methods will throw an IOException on error conditions. The readObject( ) method can also throw

The argument inStream is the input stream from which serialized objects should be read. Closing an ObjectInputStream automatically closes the underlying stream specified by inStream.

Several commonly used methods in this class are shown in Table 20-9. They will throw an IOException on error conditions. The readObject( ) method can also throw ClassNotFoundException. There is also an inner class to ObjectInputStream called GetField. It facilitates the reading of persistent fields, and its use is beyond the scope of this book. 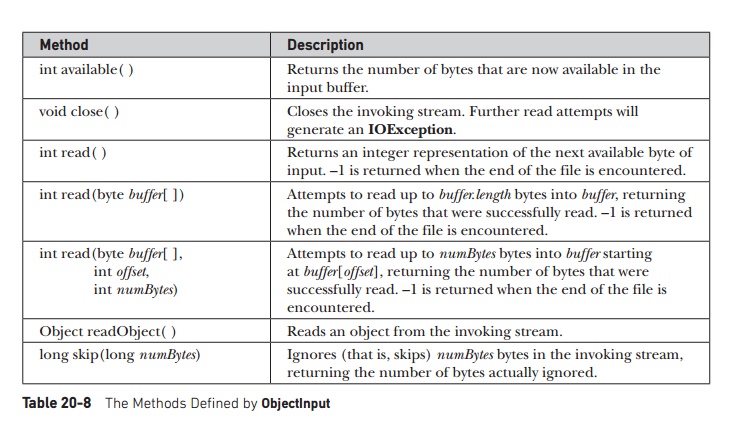 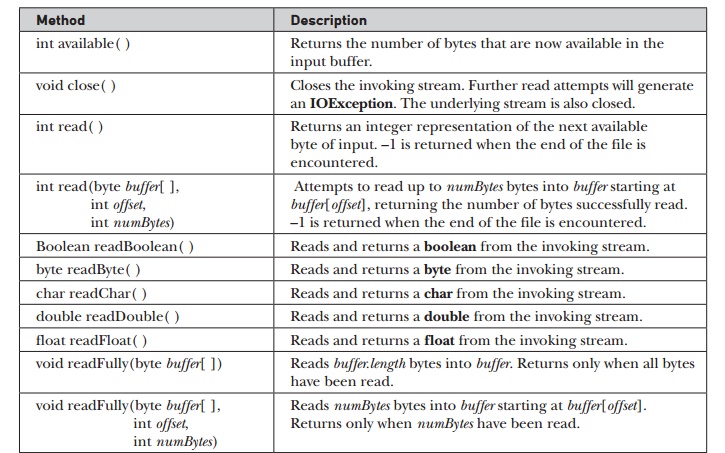 The following program illustrates how to use object serialization and deserialization. It  begins by instantiating an object of class MyClass. This object has three instance variables  that are of types String, int, and double. This is the information we want to save and restore.

Note that MyClass is defined to implement the Serializable interface. If this is not done, a NotSerializableException is thrown. Try experimenting with this program by declaring some of the MyClass instance variables to be transient. That data is then not saved during serialization.

//This program uses try-with-resources. It requires JDK 7 or later.

This program demonstrates that the instance variables of object1 and object2 are identical. The output is shown here: