Historically, sequence-based metagenomics techniques were performed directly on samples from the environment after culturing. In 1985, Pace and colleagues directly sequenced the 5S and 16S rRNA gene sequences from the environment without culturing. This was technically difficult at the time. After PCR techniques became more prevalent in the early 1990s, the analyses of specific groups of organisms became simpler. Researchers used PCR primers specific to 16S rRNA sequences to identify the different organisms within the environmental sample. Yet these techniques rely on some prior knowledge of the sequences. Moreover, this method identifies a new organism only by its 16S rRNA sequence. It does not reveal the physiology or genetics of the organism.

Making and using metagenomic libraries is a way to identify the entire genetic complement of newly discovered life forms, without culturing them. From the genome sequences the physiology and function of the organism can be determined. DNA (or RNA) from the environment is isolated (and in some cases may be enriched as described earlier). The DNA, which is a mixture of fragments from multiple genomes, is then made into a library. Such libraries are like traditional genomic libraries, except that the starting DNA has sequences from many different organisms rather than one.

Basically, the total DNA isolated from an environmental sample is cloned into a vector plasmid, and constructs are maintained in Escherichia coli. Of course, all the same library permutations apply as for a single genome library. Large DNA fragments can be cloned into BACs (bacterial artificial chromosomes), and small pieces can be cloned into plasmids. The environmental DNA can be cloned into various expression vectors to determine if any specific enzyme or protein is present in the library. Environmental mRNA can also be isolated and converted to cDNA using reverse transcriptase before cloning. Such a cDNA library will represent genes that are being actively expressed in the environment. This approach circumvents the cloning of noncoding DNA. Of course, the

same caveat exists, that is, the library is only as good as its original DNA or mRNA. If these are contaminated or sheared into small pieces, the library is worthless. In addition, some DNA from the environment may not be represented in the library because it cannot be isolated.

Metagenomic libraries can be sequenced to identify new genes or can be screened for new protein functions (Fig. 12.4). Many environmental biologists want to develop or find new enzymes that degrade pollutants or contaminants. Screening the library with a sequence containing conserved domains of known enzymes can find new enzymes. Along the same lines, PCR primers to conserved domains of known enzymes can amplify never-before-seen genes from the library. For example, aromatic oxygenases facilitate the degradation of aromatic hydrocarbons found in oil and coal. These contaminants can be degraded by a variety of different organisms. The genes and pathways involved are key targets for pathway engineering. Using PCR primers to conserved regions of known aromatic oxygenases amplifies the genes for novel (but related) oxygenases found in the environment. 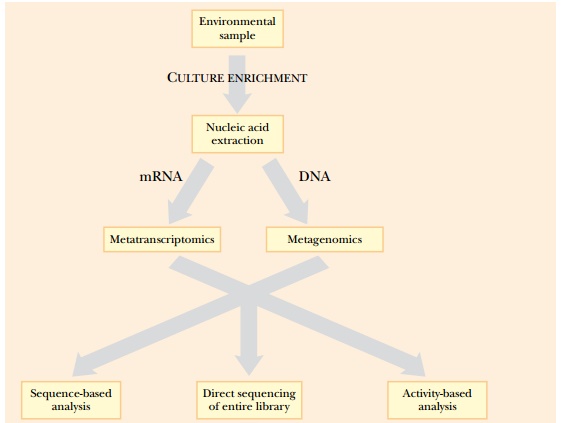 Some sequence-based analyses for metagenomic libraries include microarrays, FISH, RT-PCR, sequencing using phylogenetic anchors, and integron analysis (see later discussion). Sequencing with phylogenetic anchors begins by identifying the sequence of a known gene. Often a marker gene such as 16S rRNA gene is identified first, and then the regions upstream or downstream of the marker are sequenced.

For example, a 16S rRNA sequence from seawater classified a particular genomic fragment to the γ-Proteobacteria. Adjacent to the 16S rRNA gene was a gene similar to bacteriorhodopsin, a transmembrane proton pump that responds to light. The genes for bacteriorhodopsin

were originally thought to exist only in the Archaea, but this analysis revealed that other inhabitants of the ocean had similar genes.

Microarrays can also be used to identify the types and numbers of different organisms in an environmental sample. First, a microarray of unique sequences from known organisms is created, and then fluorescently labeled environmental DNA is hybridized to the array. The results can confirm whether or not a particular bacterium, virus, or gene creature is present, and the relative abundance can be determined by the intensity of fluorescence. FISH and RT-PCR can yield similar information, but the environmental DNA is analyzed with a only few probes or primers, respectively. The results are much more direct and focus on identifying known organisms.

Integron analysis identifies open reading frames that are used by integrons and can identify more novel unknown genes than many previous techniques (Fig. 12.5). Integrons are related to transposons, but are particularly important for the spread of genes for antibiotic resistance and other properties that give the host a growth advantage in a particular environment. Integrons are genetic elements that contain a site (attI) to integrate a segment of DNA known as a gene cassette, a promoter to express the gene cassette (Pc ), and a gene for integrase (intI), the enzyme that recombines the gene cassette into the integron. Gene cassettes are segments of DNA with one or two open reading frames (ORFs) that lack promoters and are flanked by 59-base elements (59-be, also known as attC sites). When the integrase recognizes the 59-be sites, it excises the gene cassette and integrates it downstream of the Pc promoter. This allows the open reading frame to be expressed into protein. The 59-be sequence may vary in length, but must contain a conserved, seven-nucleotide sequence. 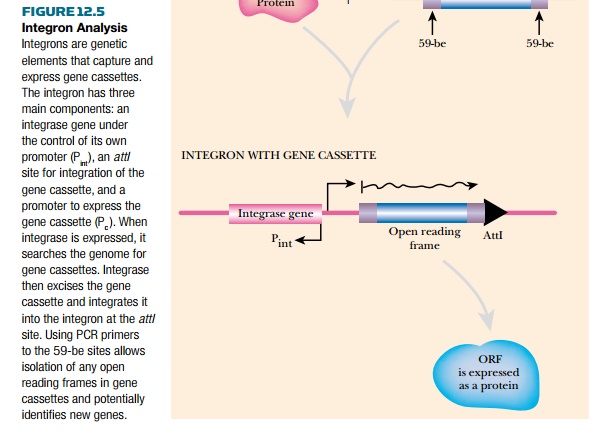 The gene cassettes are the interesting part of the scenario and the key to integron analysis. Gene cassettes were first identified because many encode antibiotic resistance genes, but they may encode any type of gene. Screening metagenomic libraries using PCR primers that recognize the 59-be elements amplifies these open reading frames. This approach has identified novel genes related to DNA glycosylases, phosphotransferases, and methyl transferases. Additionally, new antibiotic resistance genes may be identified. Integron analysis is also useful to study bacterial evolution and gene transfer because these elements can pass from bacterium to bacterium during conjugation.