Metagenomics is the study of the genomes of whole communities of microscopic life forms. Approaches include shotgun DNA sequencing, PCR, RT-PCR, and other genetic methods.

Metagenomics is the study of the genomes of whole communities of microscopic life forms. Approaches include shotgun DNA sequencing, PCR, RT-PCR, and other genetic methods. Metagenomic research sometimes allows us to identify microorganisms, viruses, or free DNA that exist in the natural environment by identifying genes or DNA sequences from the organisms. Metagenomics applies the knowledge that all creatures contain nucleic acids that encode various protein products; therefore, organisms do not have to be cultured, but can be identified by a particular gene sequence, protein, or metabolite. The term meta-, meaning more comprehensive, is also used in meta-analysis, which is the process of statistically combining separate analyses. Metagenomics is the same as genomics in its approach. The difference between genomics and metagenomics is the nature of the sample.

Genomics focuses on one organism, whereas metagenomics deals with a mixture of DNA from multiple organisms, “gene creatures” (i.e., viruses, viroids, plasmids, etc.), and/or free DNA. Most microorganisms have never been cultured or previously identified. Using metagenomics, researchers investigate, catalogue, and analyze the current microbial diversity. They identify new proteins, enzymes, and biochemical pathways. They also hope to provide insight into the properties and functions of the new organisms. The knowledge garnered from metagenomics has the potential to affect how we use the environment to our benefit or harm.

Metagenomics has been used to identify new beneficial genes from the environment, such as novel antibiotics, enzymes that biodegrade pollutants, and enzymes that make novel products (Table 12.1). Historically, studying microbes in the environment has identified many useful products. In the early 1900s, Selman Waksman was studying actinomycetes in soil when he discovered the antibiotic streptomycin. Similarly, metagenomics research has identified (by accident) another antibiotic, called turbomycin. The researchers were looking for hemolysin-related genes in the soil by screening a metagenomic library (see later discussion). Hemolysin is a bacterial toxin that punctures holes in susceptible cell membranes, allowing the cellular contents to leak out and the cell then dies. Hemolysin lyses red blood cells and creates a clear zone around a bacterial colony growing on blood agar plates. Some E. coli clones from the library had dark red or orange colors. Further investigation of these clones found two novel antibiotics, turbomycin A and B (Fig. 12.1). 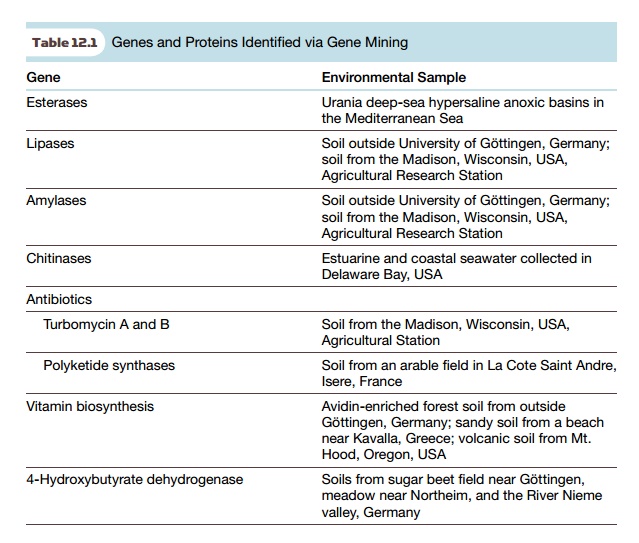 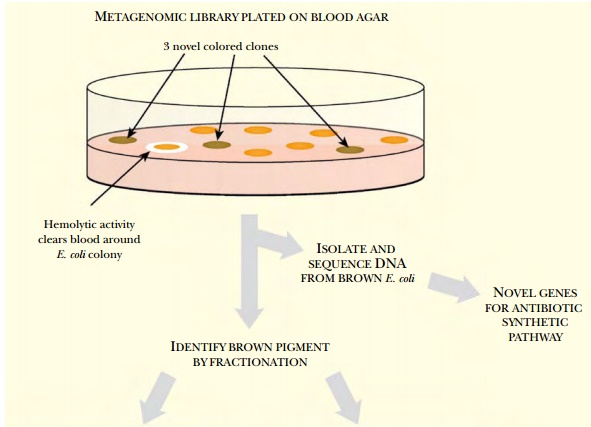 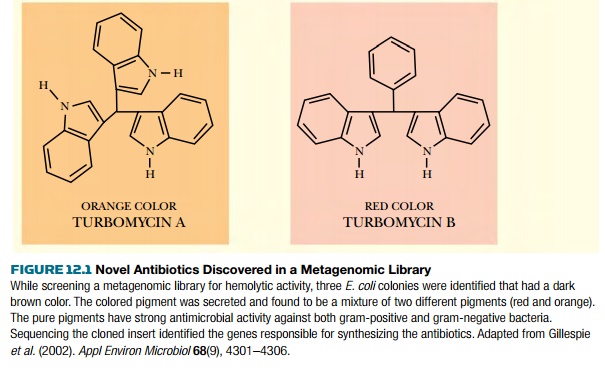