2. Availability of power: Availability of power is another important factor of concentration or location of industries. In olden days steam was used for running industries. As a result industry is established near the coal mines. But with the invention of electricity, today industries are located in any place where electricity is available. Industries like aluminum units are located near the hydroelectric projects.

4. Nearness to the market: This is a chief factor governing the location of an industry in modern period. Several advantages are secured when an industry is established near the market.

5. Availability of labour: Labour is required for organizing the productive affairs of an industry. The entrepreneurs like to start industries in those areas where labour is abundantly available. For example The growth of cotton textile industry near Bombay is due to the availability of cheap labour.

6. Government policy: The policy of government also influences the location of industries. The Government may establish an industry on political considerations by giving several incentives. It provides finance, land, water, and transport and communication facilities in backward regions with a view to developing them. It also provides tax concession, marketing consultancy, export and import facilities.

7. Availability of capital: Capital is the most essential factor for the establishment of an industry in a locality.

Weber has developed an industrial location emphasising the least cost principle. This is based on assumptions relating to transport costs and other conditions. From his theory, industrial locations for three different situations are made clear.

1. Some resources are available only in certain regions. Yet, resources such as water are ubiquitous (present everywhere).

2. Markets are found only in specific places.

3. Transport costs are determined based on the weight of the raw materials and distance of transfer.

4. There is competition in the markets for the commodities produced at the industry.

5. Humans use their discretion in their consumer behaviour in relation to the industrial commodities.

Based on these assumptions, together with the notion of high profits with least costs and imagination, Weber describes his theory of industrial location.

Weber uses a triangular structure to elaborate on his theory of industrial location using least transport cost principle. The two corners of the triangle defined by the base line represent the places where raw materials are found (R1 and R2). The market (M) is at the apex of the triangle. In the figure below, R1 and R2 are resource locations, consisting of two types of resources. M is the market and P is the industrial location. 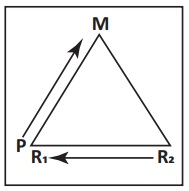 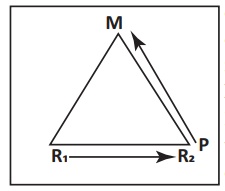 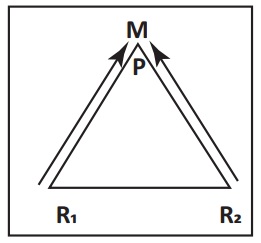 In the final analysis, the transport cost for raw materials to the industrial location P and the finished products to market M from P together is the least when industry is located at P. There is thus a chance for increased profit for the industry. 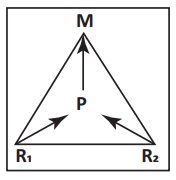 On the Basis of Labour

Those industries whose labour force consists of family units or individuals working at home with their own equipments are called cottage industries. It is a small and often informally organized industry. The industries like weaving and pottery are the examples this category. On the Basis of size of raw-Material and Finished Goods

Industries which use heavy and bulky raw-materials and produce products of the same category are called heavy industries. Iron and steel industry presents a good example of heavy industries.

On the basis of Ownership

Industries owned by individuals or firms such as Bajaj Auto or TISCO situated at Jamshedpur are called private sector industries.

Industries owned by the state and its agencies like Bharat Heavy Electricals Ltd., or Bhilai Steel Plant or Durgapur Steel Plant are public sector industries.

Industries owned jointly by the private firms and the state or its agencies such as Gujarat Alkalies Ltd., or Oil India Ltd. fall in the group of joint sector industries.

Industries owned and run co-operatively by a group of people who are generally producers of raw materials of the given industry such as a sugar mill owned and run by farmers are called co-operative sector industries.

On the Basis of Source of Raw Materials

Agro based industries are those industries which obtain raw-material from agriculture. Cotton textile, jute textile, sugar and vegetable oil are representative industries of agro-based group of industries.

The industries that receive raw materials primarily from minerals such as iron and steel, aluminium and cement industries fall in this category.

These industries depend upon animals for their raw material. Hides, skins, bones, horns, shoes, dairy, etc. are some of the pastoral-based industries.

Classification based on Nature of products