Primary activities help man to fulfill his needs and desires, by using resources which are gifted to man by nature.

Primary activities help man to fulfill his needs and desires, by using resources which are gifted to man by nature. These activities are directly connected with nature. Hunting, Gathering, Pastoralism, Fishing, Forestry, Mining and Agriculture are the primary activities.

Until 12,000 years ago, all humans lived as hunters and gatherers. At present only 0.0001% human live as hunters and gatherers. Gathering and hunting are the oldest known economic activity in the world. It often involves primitive societies which collect both plants and animals to satisfy their needs for food, shelter and clothing. These primitive activities are being carried out still in a very few parts of the world. Gathering is practiced in the areas of High altitude zones of Northern Canada, Northern Eurasia and Southern Chile and in the low altitude zones of the Amazon Basin, Tropical Africa, Northern fringe of Australia and interior parts of South East Asia. Present day gatherers and hunters are confined to a few pockets. Inuit in the Arctic region, Pygmies of Kalahari, Pintupi, Aborgines of Australians, and Paliyan of South India are the examples of foragers.

Pastoralism is the process of grazing and rearing of different types of animals like cattle, sheep, goats, etc in an organised manner to get animals products. The animals rearing can be primitive which is carried on by nomads or highly scientific means on a commercial scale. So, animal grazing and rearing can be divided into two broad categories as Nomadic Herding and Commercial Livestock Rearing.

It is a primitive subsistence activity in which the herders rely on animals for food, clothing, shelter, tools and transport. They move from place to place along with their livestock, depending on the availability of pastures and water. These people do not lead a settled life but keep on moving from place to place. Pastoral nomadism is commonly practiced in regions with little arable land, typically in the developing world. They are mostly found in central and western Asia, Northern and Western regions of Africa and some parts of southern Africa and Tundra regions.

Transhumance is the seasonal movement of people with their livestock between fixed summer and winter pastures. In mountain region it implies movement between higher altitude pastures during summer and valleys in winter. 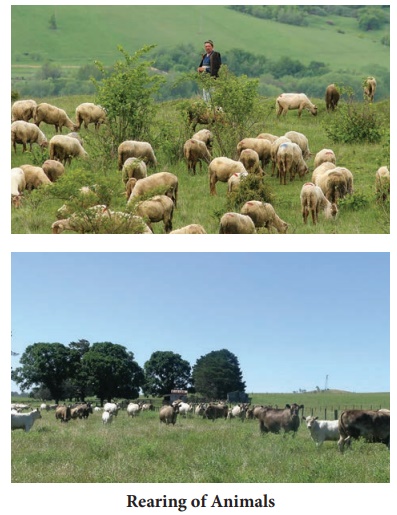 Gujiars, Bakarwals, Gaddis and Bhotiyas in the Himalayan region migrate from plains to the mountain in summer and to the plains from the high altitude pastures in winter. In the tundra regions, herders move from south to north in summer and from north to south in winter. The number of pastoral nomads has been decreasing and the areas operated by them shrinks due to developments and spreading of other economic activities. 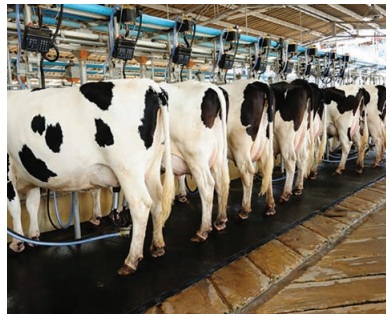 Agriculture is the most fundamental form of human activity and includes not only cultivation of crops but also the domestication of animals. The following are the major agricultural types and their characteristic features.

Employees of the economic activity called as

Subsistence Agriculture is a type of farming in which output is consumed almost entirely by the farmers and their families leaving only a small proportion for sale. Farmers follow traditional method of cultivation in this kind of farming. 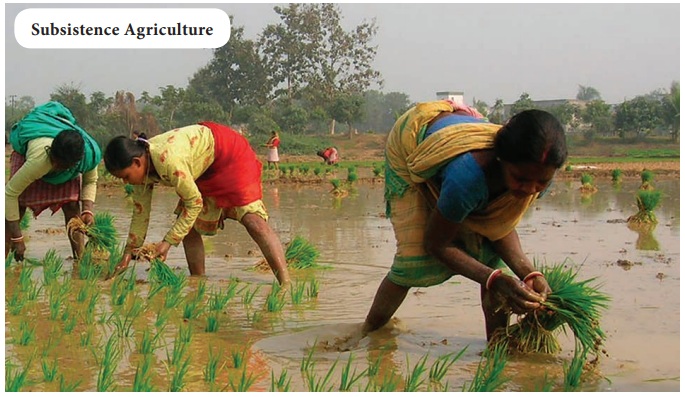 Shifting Cultivation is a kind of traditional farming practiced by tribes in the hilly and forest regions. It is practiced especially in tropical Africa. In this farming an area of ground is cleared of vegetation and cultivated for a few years and then abandoned for a new area until its fertility has been naturally restored. They are called with different names in different regions. 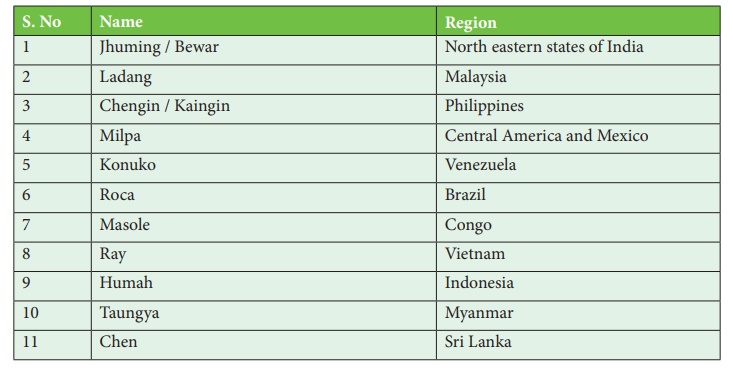 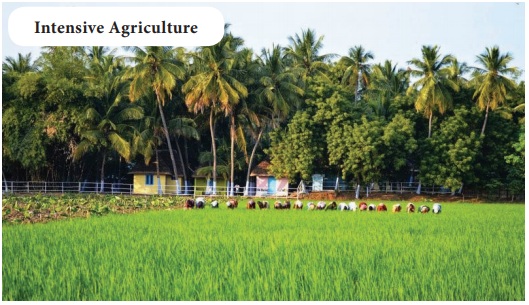 It is a kind of farming practiced in the regions where the size of the land holding is very large. It is practiced in the Interior parts of semi-arid lands of the mid-latitudes. Wheat is the major crop of this region and the farming is highly mechanized. 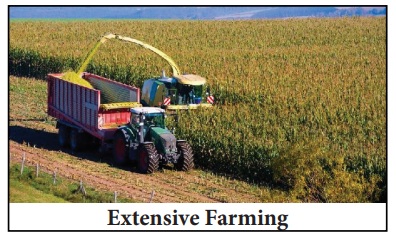 It is an agricultural system in which a farmer conducts different agricultural practice together, such as crops, fishing and livestock. The aim is to increase income through different sources and to complement land and labour demands across the year.

Pomology – The study of growing fruits.

Floriculture – refers to cultivation of flowers.

Sericulture – refers to Rearing of Silkworms

Viticulture – The study of grape cultivation` 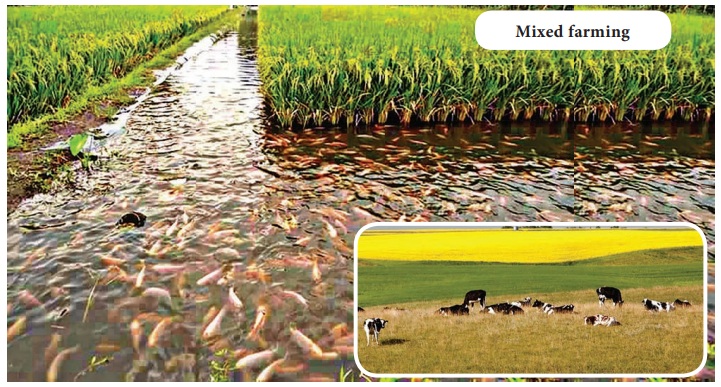 Plantation agriculture is a form of commercial farming where crops are grown for profit. Large land areas are needed for this type of agriculture. Countries that have plantation Agriculture usually experience high annual temperatures and receive high annual rainfall. Plantation is mainly found in countries that have a tropical climate. The important plantation crops are tea, coffee, cocoa, rubber, oil palm, sugarcane, bananas and pineapples. 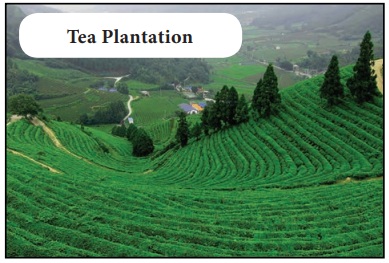 Mediterranean agriculture is highly specialised commercial agriculture. It is practised in the countries on either side of the Mediterranean Sea, Europe and in North Africa from Tunisia to Atlantic coast, southern California, central Chile, south western parts of South Africa and south and south western parts of Australia. This region is an important supplier of citrus fruits. Viticulture or grape cultivation is a speciality of the Mediterranean region. Best quality wines in the world with distinctive flavours are produced from high quality grapes in various countries of this region. The inferior grapes are dried into raisins and currants. This region also produces olives and figs. The advantage of Mediterranean agriculture is that more valuable crops such as fruits and vegetables are grown in winters when there is great demand in European and North American markets.

Specialised cultivation of flowers, vegetables and fruits is called horticulture. It is also termed as “truck farming”. These crops are grown on small farms which are well connected to the markets by cheap and efficient means of transportation. It is labour and capital intensive crops. The main areas are northwest Europe, northern eastern USA and Mediterranean region. 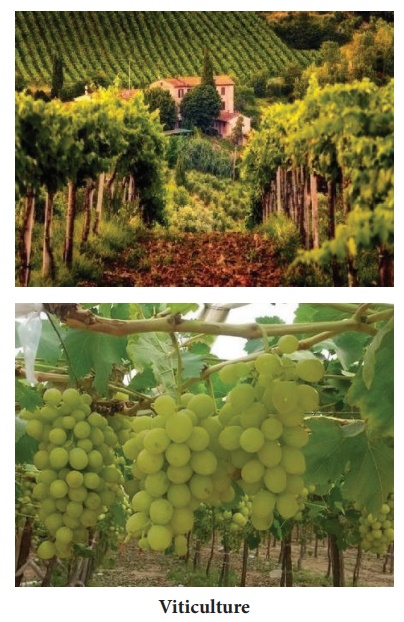 The city is located centrally within an "Isolated State" that is self-sufficient and has no external influences.

* The Isolated State is surrounded by an unoccupied wilderness.

* The land of the State is completely flat and has no rivers or mountains to interrupt the terrain.

* The soil quality and climate are consistent throughout the State.

* Farmers in the Isolated State transport their own goods to market via ox cart, across the land, directly to the central city. Therefore, there are no roads. 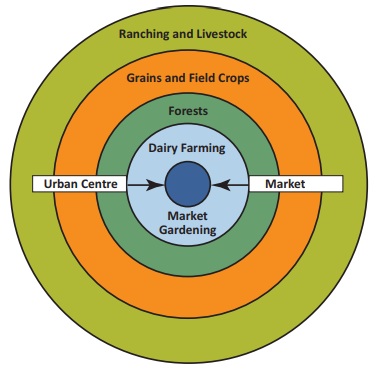 In an Isolated State with the foregoing statements being true, Von Thunen hypothesized that a pattern of rings around the city would develop based on land cost and transportation cost.

Ring 1: Dairying and intensive farming occur in the ring closest to the city. Because vegetables, fruit, milk, and other dairy products must get to market quickly, they would be produced close to the city. The first ring of land is also more expensive, so the agricultural products would have to be highly valuable ones and the rate of return is maximized.

Ring 2: Timber and firewood would be produced for fuel and building materials in the second zone. Before industrialization and coal power, wood was a very important fuel for heating and cooking. Wood is very heavy and difficult to transport, so it is located as close to the city as possible.

Ring 3: The third zone consists of extensive field crops such as grains for bread. As grains last longer than dairy products and they are much lighter than fuel, to reduce transport costs, they can be located farther from the city.

Ring 4: Ranching is located in the final ring surrounding the central city. Animals can be raised far from the city because they are self-transporting.

What the Model Tells Us?

Even though the Von Thunen model was created in a time before factories, highways, and even railroads, it is still an important model in geography. The Von Thunen model is an excellent illustration of the balance between land cost and transportation costs. When one gets closer to a city, the price of land increases. The farmers of the Isolated State balance the cost of transportation, land, and profit and produce the most cost-effective product for market. Of course, in the real world, things do not happen as they would in a model.

The process of extracting minerals from the earth crust is known as mining. The discovery of minerals in the history of human development is reflected in many stages in terms of copper, Bronze and Iron age. The use of minerals in ancient times was largely confined to making of tools, utensils and weapons. The actual development of mining began with the industrial revolution and its importance is continuously increasing.

Open pit mining involves mining minerals ore that can be found near the surface layer of the site. Some quarries can be over 1000 meters deep. This form of mining doesn’t require tunneling into the earth and is a simple method of mining that yields high production.

Surface mining is the process of mining the ores found on the surface of the earth. In this process, any unwanted soil is stripped off from the land and the ore beneath is extracted. Surface mining often leaves behind large areas of infertile land and waste rock as 70% of the mined earth is waste materials.

Sub-surface mining involves the digging of a network of shafts and tunnels into the earth to reach and extract the deposit of mineral ore beneath the earth. In comparison to other methods, underground mines impacts are less on the environment and are more harmful to those working within them. In modern practice, underground mines are pre-assessed for oxygen toxicity levels and a system of ventilation machines and protocols are in place to ensure workplace safety.

It is a rarely used method of mining material. It is also called as solution mining. It is the process of pumping a solution into the ore body, which dissolves the ore and is then extracted by a second pump. This method is used most in mining uranium deposits. 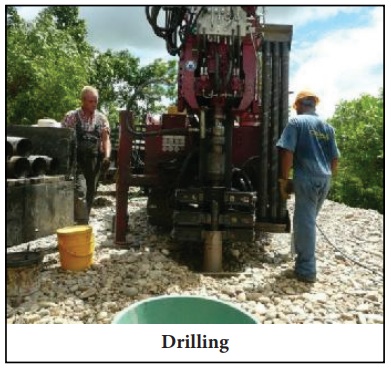