Division of the world on the basis of Economic Activies

Division of the world on the basis of Economic Activies

The classification of countries is based on the economic status such as Gross Domestic Product (GDP), Gross National Product (GNP), per capita income, industrialization, the standard of living, etc. Developed Countries refer to the sovereign state, whose economy has highly progressed and possess great technological infrastructure, as compared to other nations. 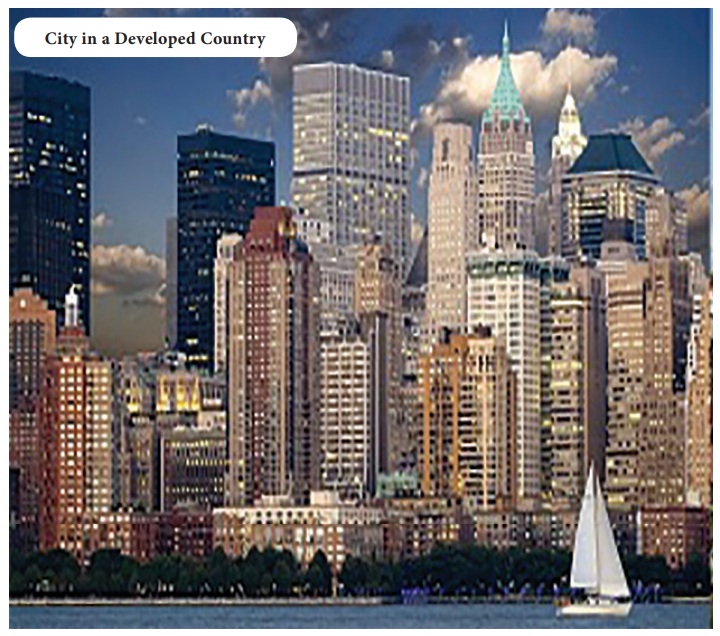 Developed countries have generally post-industrial economies, meaning the service sector provides more wealth than the industrial sector. As of 2015, advanced economies comprise 60.8% of global GDP based on nominal values and 42.9% of global GDP based on purchasing-power parity (PPP) according to the International Monetary Fund. In 2017, the ten largest advanced economies by GDP in both nominal and PPP terms were Australia, Canada, France, Germany, Italy, Japan, South Korea, Spain, the United Kingdom, and the United States.

A country in transition economy or transitional economy is an economy which is changing from a centrally planned economy to a market economy. Transition economies undergo a set of structural transformations intended to develop market-based institutions. These include economic liberalization, where prices are set by market forces rather than by a central planning organization. The process has been applied in the former Soviet Union and Eastern bloc countries of Europe and some Third world countries, and detailed work has been undertaken on its economic and social effects. 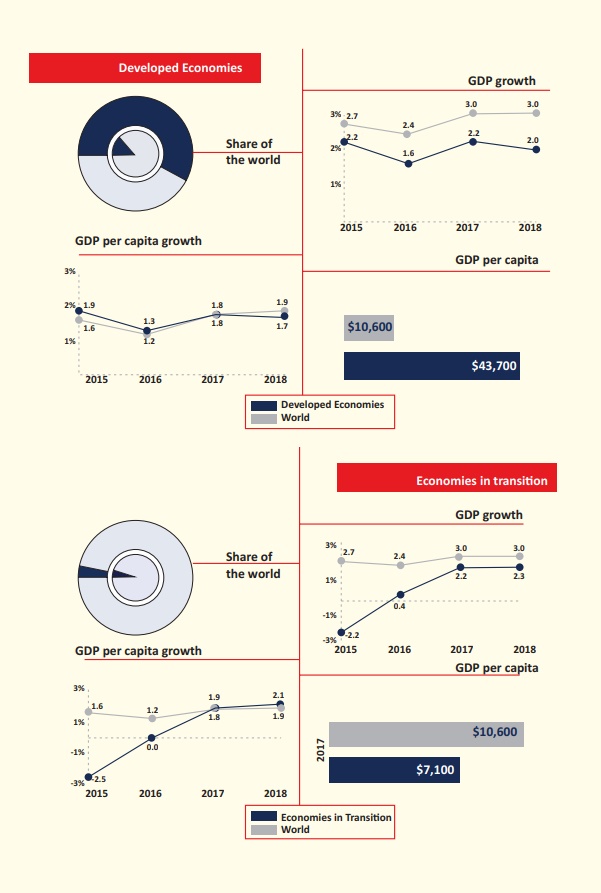 * Poverty – adjustable criterion based on GNI per capita averaged over three years. As of 2018 a country must have GNI per capita less than US$1,025 to be included on the list, and over $1,230 to graduate from it.

* Human resource weakness (based on indicators of nutrition, health, education and adult literacy).

* Economic vulnerability (based on instability of agricultural production, instability of exports of goods and services, economic importance of non-traditional activities, merchandise export concentration, handicap of economic smallness, and the percentage of population displaced by natural disasters).

The economy of the United States is the largest in the world. At $18 trillion, it represents a quarter share of the global economy (24.3%), according to the latest World Bank figures.

China follows, with $11 trillion, or 14.8% of the world economy. Japan is in third place with an economy of $4.4 trillion, which represents almost 6% of the world economy. European countries take the next three places on the list: Germany in fourth position, with a $3.3 trillion economy; the United Kingdom in fifth with $2.9 trillion; and France in sixth with $2.4 trillion. India is in seventh place with $2.1 trillion, and Italy in eighth with an economy of over $1.8 trillion. Ninth place goes to Brazil, with an almost $1.8 trillion economy. And in 10th is Canada, with an economy of over $1.6 trillion. The economy of the United States is larger than the combined economies of numbers three to 10 on the list. 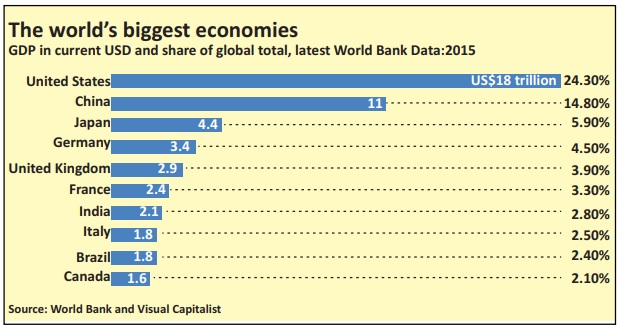 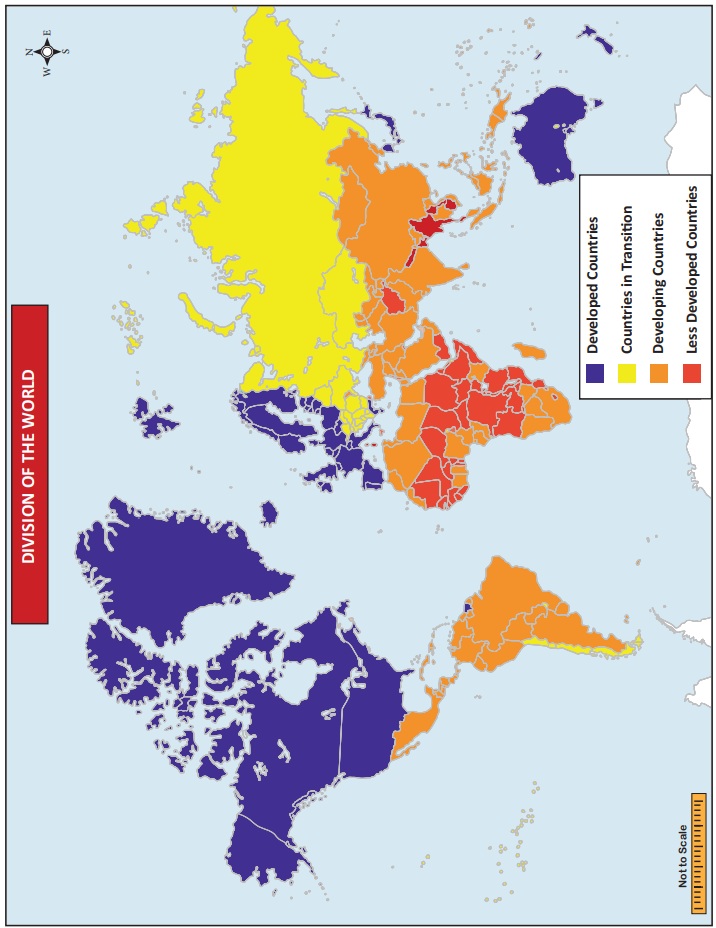 Although China trails the US by $7 trillion, it’s catching up. China’s economy grew by 6.7% in 2016, compared with America’s 1.6%, according to the IMF. It has also overtaken India as the fastest-growing large economy. The IMF’s World Economic Outlook estimated China’s economy grew at 6.7% in 2016, compared with India’s 6.6%. The chart above shows the world’s 40 biggest economies individually, but grouped by colour into continents. The Asian bloc clearly has a larger share than anywhere else, representing just over a third (33.84%) of global GDP. That’s compared to North America, which represents just over a quarter, at 27.95%. Europe comes third with just over one-fifth of global GDP (21.37%). Together, these three blocs generate more than four-fifths (83.16%) of the world’s total output. 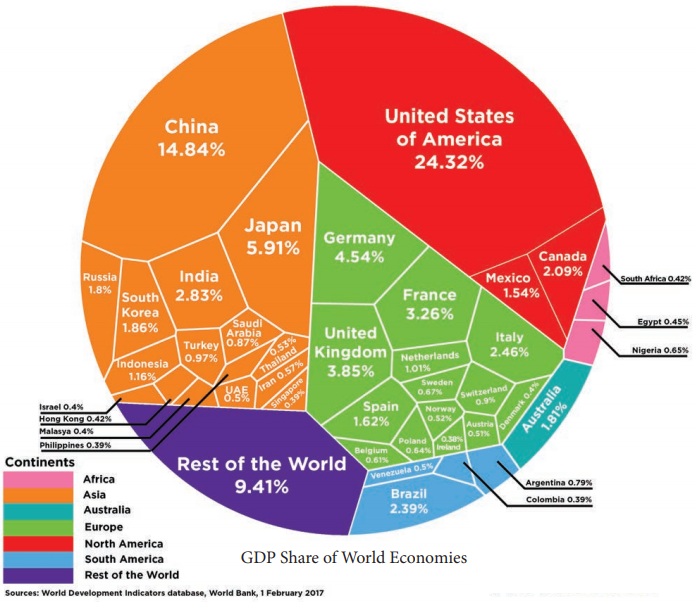