Chandragupta I appointed his son Samudragupta to succeed him in 335 CE.

Chandragupta I appointed his son Samudragupta to succeed him in 335 CE. A lengthy eulogy on him, inscribed on an Ashokan pillar, suggests that he was claiming the legacy of the Mauryan kingdom. This inscription gives an impressive list of kings and regions that succumbed to Samudragupta’s march across the country.

Four northern kings were conquered mainly in the area around Delhi and western Uttar Pradesh. The kings of the south and the east were forced to pay homage, and from the places mentioned, it appears that Samudragupta campaigned down the eastern coast as far as Kanchipuram. Nine kings of the western half of the Ganges Plain were violently uprooted. The forest kings (tribal chiefs of Central India and the Deccan) were forced to pay tribute. 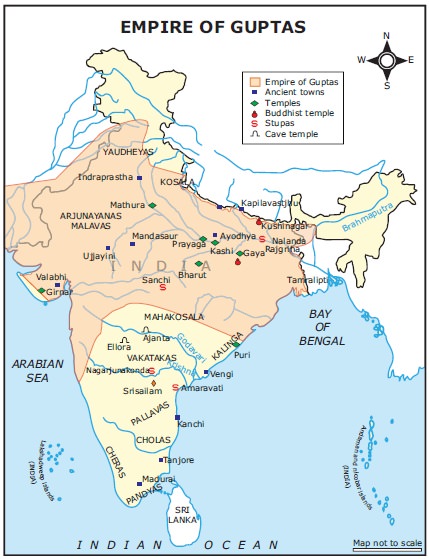 The kings of Assam and Bengal in eastern India and those of small kingdoms in Nepal and the Punjab also paid tribute by submission. Nine Republics in Rajasthan, including the Malavas and Yaudheyas, were forced to accept Gupta’s suzerainty. 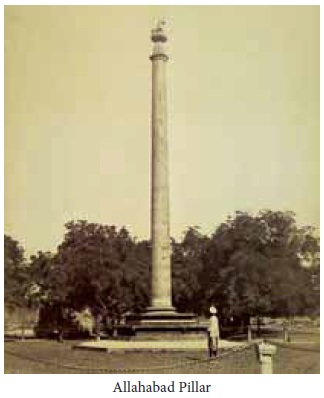 In addition, foreign kings, such as the Daivaputra Shahanushahi (a Kushana title), the Sakas and the king of Lanka also paid tribute, as mentioned in the eulogy.

Though this statement is exaggerat-ed, it is undeniable that the southern kings paid tribute, while the northern kingdoms were annexed to the Gupta Empire un-der Samudragupta. His direct control was confined to the Ganges valley, since the Sakas remained unconquered in western India. The tribes of Rajasthan paid trib-ute, but the Punjab was outside the limits of his authority. Samudragupta’s campaign broke the power of the tribal republics in those regions that led to repeated invasions from the Huns.

The relationship with Kushanas is not certain, but with regard to Lanka, its ruler Meghavarman sent presents and requested permission from Samudragupta to build a Buddhist monastery at Gaya. Samudragupta’s reign lasted for about 40 years, which must have given him ample time to plan and organise these campaigns. He performed the horse-sacrifice ritual to proclaim his military conquests. 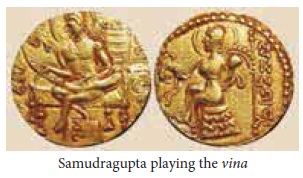 Samudragupta patronised scholars and poets like Harisena and thus promoted Sanskrit literature. Though an ardent follower of Vaishnavism, he also patronised the great Buddhist scholar Vasubandhu. As a lover of poetry and music, he was given the title “Kaviraja”. His coins bear the insignia of him playing the vina (lute).