Nitisara, written by Kamandaka, is a text like Arthasastra. It emphasises the importance of the royal treasury and mentions various sources of revenue.

Nitisara, written by Kamandaka, is a text like Arthasastra. It emphasises the importance of the royal treasury and mentions various sources of revenue. The many ambitious military campaigns of kings like Samudragupta must have been financed through revenue surpluses. Gupta inscriptions reveal some details about the revenue department. The akshapataladhikrita was the keeper of royal records. Gupta inscriptions mention the terms klipta, bali, udranga, uparikara, ,and iranyavesti meant forced labour.

Agriculture flourished in the Gupta period due to establishment of irrigation works. Apart from the state and individual cultivators, Brahmins, Buddhists and Jain sanghas brought waste lands under cultivation when they were donated to them as religious endowments. Cultivators were asked to maintain their crops properly from damages and those who indulged in damaging the crops were punished. Likewise, crops and fields were fenced.

The crops cultivated during the Gupta period were rice, wheat, barley, peas, lentils, pulses, sugarcane and oil seeds. From Kalidasa, we come to know that the south was famous for pepper and cardamom. Varahamihira gives elaborate advice on the plantation of fruit trees.

The Paharpur copper plate inscription indicates that the king was the sole proprietor of the land. Even when he made land grants, he reserved his prerogatives over it. The location and boundaries of individual plots were marked out and measured by the record keepers and influential men in the locality. As stated in Paharpur plates, an officer called ustapala maintained records of all the land transactions in the district and the village accountant preserved records of land in the village. During the Gupta period, the land was classified as detailed below.

The importance of irrigation to agriculture was recognised in India from the earliest times. From the Narada Smriti, we understand that there were two kinds of dykes: the bardhya, which protected the field from floods, and the khara, which served the purpose of irrigation. To prevent inundation, jalanirgamah (drains) were constructed, which is mentioned by Amarasimha. Canals were constructed not only from rivers but also from tanks and lakes. The most famous lake was the Sudarsana lake at the foot of Girnar Hills in Gujarat.

The position of peasantry was undermined. They were reduced to the position of serfs due to the caste classification and also due to the granting of various privileges and lands to others. The practice of lease-holding reduced the permanent tenants to tenants at will (which means tenants could be evicted without notice). The farmers were required to pay various taxes. 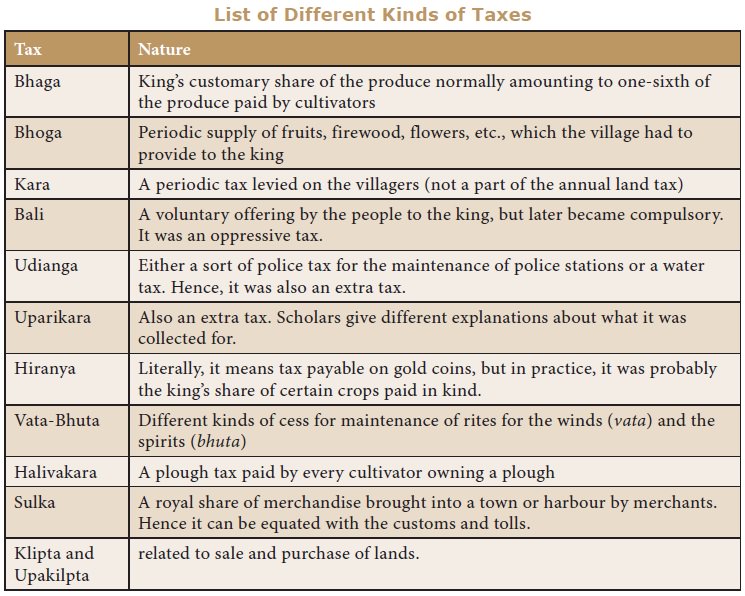 Mining and metallurgy was one of the most flourishing industries during the Gupta period. Amarasimha, Varahamihira and Kalidasa make frequent mention of the existence of mines. The rich deposits of iron ore from Bihar and copper from Rajasthan were mined extensively during this period.

Blacksmiths were next only to agriculturists in importance in the society. Metal was used for the manufacture of various domestic implements, utensils and weapons. The improvement in the ploughshare, with the discovery of iron, for deep ploughing and for increasing cultivation happened during this period.

The most important and visible evidence of the high stage of development in metallurgy is the Mehrauli Iron Pillar of King Chandra in the Qutb Minar Complex in Delhi, identified with Chandragupta II.This monolith iron pillar has lasted through the centuries without rusting. It is a monument to the great craftsmanship of the iron workers during the Gupta period. Coin casting, metal engraving, pottery making, terracotta work and wood carving were other specialised crafts.

A significant development of the period in metal technology was the making of the seals and statutes of Buddha and other gods. It was laid down that the people had to pay for the loss arising out smelting of iron, gold, silver, copper, tin and lead.

The contribution of traders to the soundness of the Gupta economy is quite impressive. Two distinctive types of traders called sresti and sarthavaha existed. Sresti was usually settled at a particular place and enjoyed an eminent position by virtue of his wealth and influence in the commercial life and administration of the place. The sarthavaha was a caravan trader who carried his goods to different places for profitable sale.

Trade items ranged from products for daily use to valuable and luxury goods. They included pepper, sandalwood, elephants, horses, gold, copper, iron and mica. The abundant inscriptions and seals mentioning artisans, merchants and guilds are indicative of the thriving crafts and trade. (Guild is a society or other organisation of people with common interests or an association of merchants.) There are several references in several sources to artisans, traders and occupational groups in the guilds. Guilds continued as the major institution in the manufacture of goods and in commercial enterprise. They remained virtually autonomous in their internal organisation, and the government respected their laws. These laws were generally drafted by a larger body, the corporation of guilds, of which each guild was a member.

The Narada and Brihaspati Smritis describe the organisation and activities of guilds. They mention that the guild had a chief and two, three or five executive officers. Guild laws were apparently laid down in written documents. The Brihaspati Smriti refers to guilds rendering justice to their members and suggests that these decisions should, by and large, be approved by the king. There is also mention of the philanthropic activities of guilds, for instance, providing shelter for travellers and building assembly houses, temples and gardens. The inscription also records that the chief of the guilds played an important role in the district-level administrative bodies. There is also mention of joint corporate bodies of merchant-bankers, caravan merchants and artisans. The guilds also acted as banks. The names of donors are mentioned in this inscription.

Usury (the lending of money at an exorbitant rate of interest) was in practice during the Gupta period. The detailed discussion in the sources of that period indicates that money was used, borrowed and loaned for profit. There were many ports that facilitated trade in the western coast of India such as Calliena (Kalyan), Chaul port in ruin sixty kilometres south of Mumbai, and the markets of Male (Malabar), Mangarouth (Mangalore), Salopatana, Nalopatana and Pandopatana on the Malabar coast. Fahien refers to Tamralipti in Bengal as an important centre of trade on the eastern coast. These ports and towns were connected with those of Persia, Arabia and Byzantium on the one hand and Sri Lanka, China and Southeast Asia on the other. Fahien describes the perils of the sea route between India and China. The goods traded from India were rare gems, pearls, fine textiles and aromatics. Indians bought silk and other articles from China.