A good specimen of stone sculpture is the well-known erect Buddha from Sarnath.

By evolving the Nagara and the Dravida styles, the Gupta art ushers in a formative and creative age in the history of Indian architecture with considerable scope for future development.

The rock-cut caves continue the old forms to a great extent but possess striking novelty by bringing about extensive changes in the ornamentation of the facade and in the designs of the pillars in the interior. The most notable groups of the rock-cut caves are found at Ajanta and Ellora (Maharashtra) and Bagh (Madhya Pradesh). The Udayagiri caves (Orissa) are also of this type. 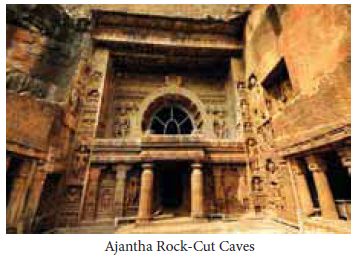 The second group of temples shows many of the characteristic features of the Dravida style. The importance of the third group lies in the innovation of a shikhara that caps the sanctum sanctorum, the main feature of the Nagara style.

Stupas were also built in large numbers but the best are found at Samat (Uttar Pradesh), Ratnagiri (Orissa) and Mirpur Khas (Sind).

A good specimen of stone sculpture is the well-known erect Buddha from Sarnath. Of the puranic images, perhaps the most impressive is the great Boar (Varaha) at the entrance of a cave at Udayagiri.

The technology of casting statues on a large scale of core process was practised by the craftsmen during the Gupta period with great workmanship. Two remarkable examples of Gupta metal sculpture are (1) a copper image of the Buddha about eighteen feet high at Nalanda in Bihar and (2) the Sultanganj Buddha of seven-and-a-half feet in height.

The art of painting seems to have been in popular demand in the Gupta period than the art of stone sculptures. The mural paintings of this period are found at Ajanta, Bagh, Badami and other places. 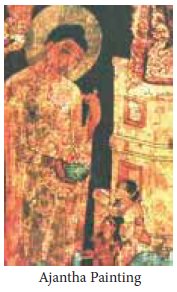 From the point of technique, the surface of these paintings was perhaps done in a very simple way. The mural paintings of Ajanta are not true frescoes, for frescoes is painted while the plaster is still damp and the murals of Ajanta were made after it had set. The art of Ajanta and Bagh shows the Madhyadesa School of painting at its best.

Clay figurines were used both for religious and secular purposes. We have figurines of Vishnu, Karttikeya, Durga, Naga and other gods and goddesses.

Gupta pottery remains found at Ahchichhatra, Rajgarh, Hastinapur and Bashar afford proof of excellence of pottery. The most distinctive class of pottery of this period is the “red ware”.

The Guptas made Sanskrit the official language and all their epigraphic records were written in it. The period saw the last phase of the Smriti literature.

The Gupta period also saw the development of Sanskrit grammar based on Panini who wrote Ashtadhyayi and Patanjali who wrote Mahabhashya on the topic. This period is particularly memorable for the compilation of the Amarakosa, a thesaurus in Sanskrit, by Amarasimha. A Buddhist scholar from Bengal, Chandrogomia, composed a book on grammar named Chandravyakaranam.

The Puranas, as we know them in their present form, were composed during this time. They are the legends as recorded by the Brahmins. They were originally composed by bards (professional storytellers), but now, having come into priestly hands, they were rewritten in classical Sanskrit. Details on Hindu sects, rites and customs were added in order to make them sacrosanct religious documents. The succession of dynasties was recorded in the form of prophesies. Thus what began as popular memories of the past were revived and rewritten in prophetic form and became the Brahmanical interpretation of the past. The Mahabharata and the Ramayana also got their final touches and received their present shape during this period.

The earliest Buddhist works are in Pali, but in the later phase, Sanskrit came to be used to a great extent. Most of the works are in prose with verse passages in mixed Sanskrit. Arya Deva and Arya Asanga of the Gupta period are the most notable writers. The first regular Buddhist work on logic was written by Vasubandhu. Vasubandhu’s disciple, Dignaga, was also the author of many learned works.

The Jaina canonical literature at first took shape in Prakrit dialects. Sanskrit came to be the medium later. Within a short time, Jainism produced many great scholars and by their efforts the Hindu itihasa and puranas were recast in Jaina versions to popularise their doctrines. Vimala produced a Jaina version of Ramayana. Siddasena Divakara laid the foundation of logic among the Jainas.

Samudragupta himself had established his fame as Kaviraja. It is widely believed that his court was adorned by the celebrated navaratnas like Kalidasa, Amarasimha, Visakadatta and Dhanvantri. Kalidasa’s famous dramas are Sakunthalam, Malavikagnimitram and Vikramaurvashiyam. The works of Sudraka (Mrichchhakatika), Visakhadatta (Mudraraksasa and Devichandraguptam) and the lesser known dramatists and writers also contributed to the literary and social values in the classical age. An interesting feature of the dramas of this period is that while the elite spoke in Sanskrit, the common people spoke Prakrit.

In Prakrit, there was patronage outside the court circle. The Gupta age witnessed the evolution of many Prakrit forms such as Suraseni used in Mathura and its vicinity, Ardh Magadhi spoken in Awadh and Bundelkhand and Magadhi in modern Bihar.

Nalanda was an acclaimed Mahavihara, a large Buddhist monastery in the ancient kingdom of Magadha in India. The site is located about ninety five kilometres southeast of Patna near the town of Bihar Sharif and was a centre of learning from the fifth century CE to c. 1200 CE. It is a UNESCO World Heritage Site.

The highly formalised methods of Vedic learning helped inspire the establishment of large teaching institutions such as Taxila, Nalanda and Vikramashila, which are often characterised as India’s early universities. Nalanda flourished under the patronage of the Gupta Empire in the fifth and sixth centuries and later under Harsha, the emperor of Kanauj. The liberal cultural traditions inherited from the Gupta age resulted in a period of growth and prosperity until the ninth century. The subsequent centuries were a time of gradual decline, a period during which Buddhism became popular in eastern India patronised by the Palas of Bengal. 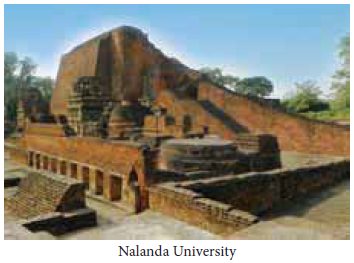 At its peak, the Nalanda attracted scholars and students from near and far with some travelling all the way from Tibet, China, Korea and Central Asia. Archaeological findings also confirm the contact with the Shailendra dynasty of Indonesia, one of whose kings built a monastery in the complex.

Nalanda was ransacked and destroyed by an army of the Mamluk dynasty of the Delhi Sultanate under Bakhtiyar Khalji in c. 1200 CE. While some sources note that the Mahavihara continued to function in a makeshift fashion for a little longer, it was eventually abandoned and forgotten. The site was accidentally discovered when the Archaeological Survey of India surveyed the area. Systematic excavations commenced in 1915, which unearthed 11 monasteries and 6 brick temples situated on 12 hectares (30 acres) of land. A trove of sculptures, coins, seals and inscriptions have also been discovered since then and all of them are on display in the Nalanda Archaeological Museum situated nearby. Nalanda is now a notable tourist destination and a part of the Buddhist tourism circuit. Recently, the government of India, in cooperation with other South and South-east Asian countries, has revived this university.

The invention of the theory of zero and the consequent evolution of the decimal system are to be credited to the thinkers of this age.

In the Surya Siddanta, Aryabhatta (belonging to late fifth and early sixth century CE) examined the true cause of the solar eclipses. In calculation of the size of the earth, he is very close to the modern estimation. He was the first astronomer to discover that the earth rotates on its own axis. He is also the author of Aryabhattiyam, which deals with arithmetic, geometry and algebra.

Metallic preparations for the purpose of medicine and references to the use of mercury and iron by Varahamihira and others indicate that much progress was made in chemistry. The Navanitakam was a medical work, which is a manual of recipes, formulation and prescriptions. Hastyayurveda or the veterinary science authored by Palakapya attests to the advances made in medical science during the Gupta period.