The functional unit of the central nervous system (CNS) is the neuron, and most neuropharmacological agents have the neuron as their primary site of action.

The functional unit of the central nervous system (CNS) is the neuron, and most neuropharmacological agents have the neuron as their primary site of action. CNS neurons are capable of transmitting information to and receiving information from other neurons and periph-eral end organs, such as muscle cells, glandular cells, and specialized receptors, for example, those involved with proprioception, temperature sensing, and so on.

Most cells normally receive a large excitatory input with a more or less constant generation of action po-tentials. The net result of generated IPSPs will be to de-crease the number of nerve impulses per unit of time. By these mechanisms, neurotransmitters producing ei-ther an EPSP (excitatory neurotransmitter) or an IPSP (inhibitory transmitter) directly influence the number of action potentials generated by the neurons with which they interact.

Morphologically, many synapses in the CNS appear to be quite similar to those for the peripheral auto-nomic nervous system. Electron microscopic studies have verified the similarities and have shown the pres-ence of several types of storage vesicles in the areas of synapses. Neurons may synthesize, store, and release one or more transmitters. Many more synapses exist in the CNS than in the periphery, and many more neuro-transmitters appear to be involved. 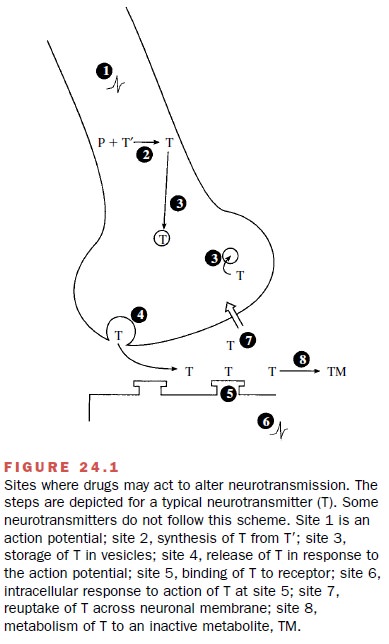 In contrast, an agent can produce a diminished re-sponse by (1) decreasing synthesis of transmitter, (2) in-creasing transmitter metabolism, (3) promoting an in-creased neuronal uptake, or (4) blocking access of the transmitter to its receptor. The first three processes tend to diminish the amount of transmitter in the synaptic cleft. Some agents (including several useful drugs) pos-sess most of these capabilities at norepinephrine, dopamine, serotonin, histamine, and acetylcholine (ACh) synapses. Several important drugs interfere with other CNS transmitter systems, particularly some of the amino acid transmitters, in some of the above-men-tioned ways to produce their effects.

In the mammalian CNS powerful inhibitory systems function continually to slow the number of action po-tentials generated. The effects of stimulating an excita-tory pathway can appear to be exaggerated if normal in-hibitory influences to that region are diminished. Correspondingly, an inhibitory pathway will appear ex-aggerated if part of the excitatory influence to that sys-tem has been removed.