A large number of CNS neurotransmitters have been either tentatively or positively identified.

Quantitatively, dopamine is the most important of the biogenic amine neurotransmitters in the CNS. The three major distinct dopaminergic systems in the mammalian brain are categorized according to the lengths of the neurons. There is a system comprising ultrashort neu-rons within amacrine cells of the retina and peri-glomerular cells in the olfactory bulb. Of the several intermediate-length dopaminergic neuronal systems, the best studied are neurons in the tuberobasal ventral hy-pothalamus that innervate the median eminence and the intermediate lobe of the pituitary. These neurons are important in the regulation of various hypothalamohy-pophysial functions, including prolactin release from the anterior pituitary. The best-categorized of the dopamine neuronal systems are the long projections from nuclei in the substantia nigra and ventral tegmental areas to the limbic cortex; other limbic structures, including the amygdaloid complex and piriform cortex; and the neo-striatum (primarily the caudate and putamen). In Parkinson’s disease, the primary biochemical feature is a marked reduction in the concentration of dopamine in this long projection system .

Several classes of drugs, notably the antipsychotics, interfere with dopaminergic transmission. In general, dopamine appears to be an in-hibitory neurotransmitter. Five dopamine receptors have been identified; the most important and best stud-ied are the D1- and D2-receptor groups. The D1-receptor, which increases cyclic adenosine monophosphate (cAMP) by activation of adenylyl cyclase, is located pri-marily in the region of the putamen, nucleus accum-bens, and in the olfactory tubercle. The D2-receptor de-creases cAMP, blocks certain calcium channels, and opens certain potassium channels.

Most central noradrenergic neurons are located in the nucleus locus ceruleus of the pons and in neurons of the reticular formation. Fibers from these nuclei inner-vate a large number of cortical, subcortical, and spino-medullary fields. Many functions have been ascribed to the central noradrenergic neurons, including a role in affective disorders , in learning and memory, and in sleep–wake cycle regulation. The mam-malian CNS contains both α- and β-adrenoceptors.

Epinephrine is found only in very low concentrations in the mammalian CNS, and it is unlikely to play a major role as a neurotransmitter.

Serotonin (5-hydroxytryptamine, or 5HT) is present in the brain as well as in the periphery. In humans, about 90% of the total serotonin in the body is in enterochro-maffin cells in the gastrointestinal tract; the remaining 10% occurs primarily in the platelets and brain. The physiological significance of the vast amounts of sero-tonin constantly synthesized and metabolized in the pe-riphery still remains an enigma. Brain serotonin has been implicated as a potential neurotransmitter in the media-tion of a wide variety of phenomena (see Actions).

Dietary tryptophan is the source of the formation of serotonin. Enzymes and cofactors necessary for sero-tonin synthesis are present in both the enterochromaf-fin cells of the gastrointestinal tract and neurons in the brain. Tryptophan is initially hydroxylated to form 5-hydroxytryptophan. Decarboxylation of the latter com-pound results in the formation of serotonin (Fig. 24.2). 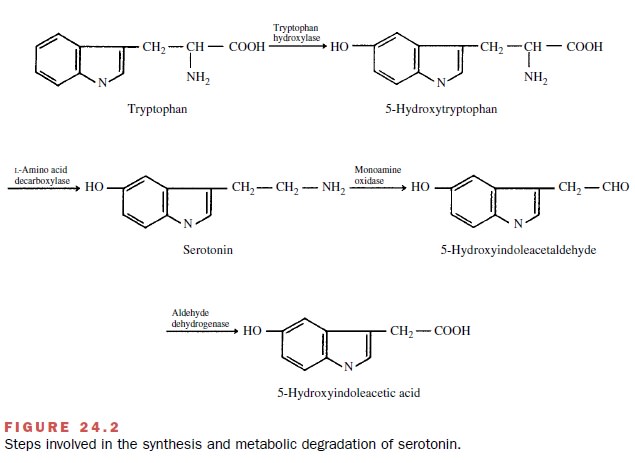 The enzymes responsible for the metabolism of sero-tonin are present in all of the cells containing this amine and in the liver. Serotonin is initially oxidatively deami-nated to form 5-hydroxyindoleacetaldehyde; this com-pound is subsequently rapidly oxidized to the major metabolite 5-hydroxyindoleacetic acid, which is excreted in the urine. Much of the serotonin released in the brain at synapses is taken back into the initial neuron by an ac-tive reuptake mechanism to be released again.

Actions and Site of Actions

Most of the serotonin in the brain is in the brainstem, specifically in the raphe nuclei; considerable amounts also are present in areas of the hypothalamus, the lim-bic system, and the pituitary gland. Current evidence in-dicates that serotonin is involved in the regulation of several aspects of behavior, including sleep, pain per-ception, depression, sexual activity, and aggressiveness. Some of the most important antidepressant agents are believed to prevent the reuptake of serotonin . Serotonin also may be involved in temper-ature regulation and in the hypothalamic control of the release of pituitary hormones.

In addition to its presumed role as a neurotransmit-ter within the brain, serotonin is synthesized in the pineal gland, where it is a precursor for the synthesis of melatonin, a hormone that influences endocrine activ-ity, presumably by an action within the hypothalamus.

The mammalian brain appears to have an abun-dance of sites with which serotonin interacts. Fourteen distinct mammalian receptor subtypes for serotonin have been established, not all of which have been iden-tified in the brain. They are characterized as 5-HT1, 5-HT2, . . . 5-HT7 subsets. There are at least five subtypes of the 5-HT1 subset and three receptor subtypes for the 5-HT2 subset.

A large number of amino acids serve as neurotransmit-ters in the mammalian CNS.

γ-Aminobutyric acid (GABA) is the major inhibitory neurotransmitter in the mammalian CNS. GABA is pri-marily synthesized (Fig. 24.3) from glutamate by the enzyme L-glutamic acid-l-decarboxylase (GAD); it is subsequently transaminated with α-ketoglutarate by GABAA-oxoglutarate transaminase (GABA-T) to yield glutamate and succinic semialdehyde. 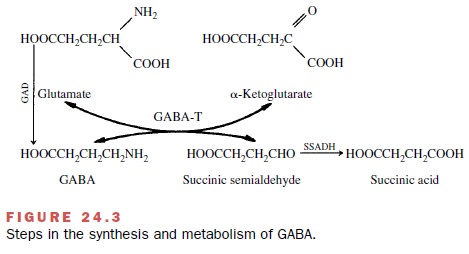 Two types of GABA receptors have been identified in mammals, a GABAA- and a GABAB-receptor. The GABAA-receptor (or recognition site), when coupled with GABA, induces a shift in membrane permeability, primarily to chloride ions, causing hyperpolarization of the neuron. This GABA receptor appears to be part of a macromolecule that contains, in addition to the GABAA-receptor, benzodiazepine and barbiturate binding sites and the chloride ionophore (chloride channel). See Figure 24.4.

A number of drugs are thought to exert their CNS effect by altering GABAA-receptor activity. The 1,4-benzodiazepines, -carbolines, barbiturates, alcohols, and general anesthetics appear to facilitate GABA transmission by interacting at this macromolecular complex. Vigabatrin, a newly approved anticonvulsant, elevates brain GABA by inhibiting the breakdown en-zyme GABA-T. Several CNS convulsants, including bicuculline, picrotoxinin, and pentylenetetrazol, are an-tagonists at the GABA receptor. Since GABA agonists have been shown to be anticonvulsants and GABA an-tagonists are convulsants, there is much interest in the role of GABA in epilepsy . The GABAB-receptor, in contrast, is not modulated by ben-zodiazepines, is not linked to chloride movement, and is not nearly as well characterized as is the GABAA-re-ceptor. The GABAB-receptor is coupled to K+ channels and is activated by the antispastic agent baclofen.

Glycine is another inhibitory CNS neurotransmitter. Whereas GABA is located primarily in the brain, glycine is found predominantly in the ventral horn of the spinal cord. Relatively few drugs are known to in-teract with glycine; the best-known example is the con-vulsant agent strychnine, which appears to be a rela-tively specific antagonist of glycine.

These two excitatory amino acids (EAAs) are widely distributed throughout the mammalian CNS. Their ad-ministration leads to rapid depolarization of neurons and an increase in firing rate. There are two distinct classes of EAA receptors: ionotropic receptors and metabotropic receptors. The ionotropic receptors di-rectly gate ion channels, while the metabotropic recep-tors are coupled to intracellular G proteins. Receptors are named according to their sensitivity to the action of selective agonists (Table 24.1). The best-character-ized receptor is known as the NMDA (N-methyl-D-aspartate) receptor, which directly gates a Mg cation channel that is also permeable to Ca++ and NA+ . Com-pounds that block the NMDA receptor complex may attenuate the neuronal damage following anoxia, such as occurs during a stroke; much of the neuronal damage associated with strokes may be related to the release of glutamic acid, aspartic acid, or both. Similarly, neuronal damage may occur as a result of seizures, and this also may be related to excessive EAA release. Antagonists of the NMDA receptor complex are being studied for possible uses in strokes and other types of hypoxia. 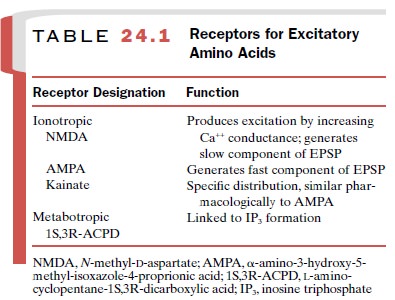 Histamine occurs in the brain, particularly in certain hypothalamic neurons, and evidence is strong that his-tamine is a neurotransmitter. Distribution of histamine, its synthetic enzyme (histidine decarboxylase), and methyl histamine (the major brain metabolite) is not uniform. Possible roles for histamine in the regulation of food and water intake, thermoregulation, hormone release, and sleep have been suggested.

Several additional amino acids are considered to be neurotransmitter candidates. Among these are taurine, - and -alanine, 2-phenylethylamine, and imidazole-4-acetic acid. No available drugs are known to act via these amino acids.

A large number of endogenous peptides are produced by neurons that appear to possess the essential charac-teristics of neurotransmitters (e.g., their release is Ca++ dependent, they are localized in specific neurons, and their release induces changes in postsynaptic neu-ronal systems).

The names of the agents can be terribly misleading to the beginning student. Many of the peptides have been around for many years and were named according to their known effects when they were discovered. Examples are gastrin and cholecystokinin (CCK), com-pounds that were historically known as gut hormones. It is important, therefore, to realize that the names of the neuroactive peptides may bear no resemblance to their function in the brain. Many of the neuroactive peptides exist as families of chemically related compounds or oc-cur within larger precursor molecules (or propeptides). However, several forms may be “active,” and several slightly different structures may confer subtle changes in selectivity. Many neuroactive peptides appear to co-exist and be released along with one or more of the “traditional” neurotransmitters, such as ACh, dop-amine, or serotonin.

More than two dozen peptides are being studied as probable central neurotransmitters, and likely many more compounds remain to be discovered.

The first neuropeptide to be isolated and characterized is known as substance P. Although this 11–amino acid peptide (undecapeptide) has been known for more than 60 years, its exact physiological role is still not clear. Substance P occurs in high concentrations in neurons projecting into the substantia gelatinosa layer of the spinal cord from dorsal root ganglia, among many other areas of the brain. Substance P can directly depolarize motor neurons in a manner analogous to that of other excitatory neurotransmitters. It is probable that sub-stance P is released from small unmyelinated nerve fibers in response to painful stimulation. Levels of substance P in the substantia nigra are markedly reduced in the neurological disease Huntington’s chorea.

Historically vasopressin and oxytocin, two nonapep-tides, were the first peptide “neurohormones” to be con-sidered; they are stored in the neurohypophysis and re-leased into the bloodstream upon an appropriate stimulus. In the periphery, oxytocin stimulates the con-traction of epididymal and uterine smooth muscle  and vasopressin (antidiuretic hormone) fa-cilitates the reabsorption of water from the kidney tubules. In addition to these well-accepted roles as neu-rohormones, there is convincing evidence that these compounds function as neurotransmitters; they both possess potent inhibitory actions on neurohypophyseal neurons. The significance of their neurotransmitter function is not yet clear.

A seminal discovery during the 1960s and 1970s was the presence of endogenous substances in mammalian brain that appeared to possess the pharmacological qualities of morphine and other opioid analgesics. It had been known for quite awhile that most “drug re-ceptors” were in fact receptors for endogenous trans-mitters. It was surprising, therefore, when tissue from mouse brain was shown to avidly bind opioids, such as morphine and heroin, in a stereoselective manner. As Avram Goldstein, one of the pharmacologists in-volved in discovering the endogenous opioids, noted, “It seemed unlikely, a priori, that such highly stereo-specific receptors should have been developed by na-ture to interact with alkaloids from the opium poppy.”1

A series of peptides, occurring naturally in brain and possessing pharmacological properties similar to those of morphine, have been described. At least three separate families of peptides have opioid prop-erties (Table 24.2), and the different classes of pep-tides reside in separate distinct neurons. It is likely that the endogenous opioid peptides coexist in neu-rons with other nonopioid neurotransmitters. The ini-tial hope that these endogenous agents or synthetic derivatives of them would be found to retain the anal-gesic activity of the opioids but be devoid of respira-tory depression and/or addictive properties has now somewhat abated. 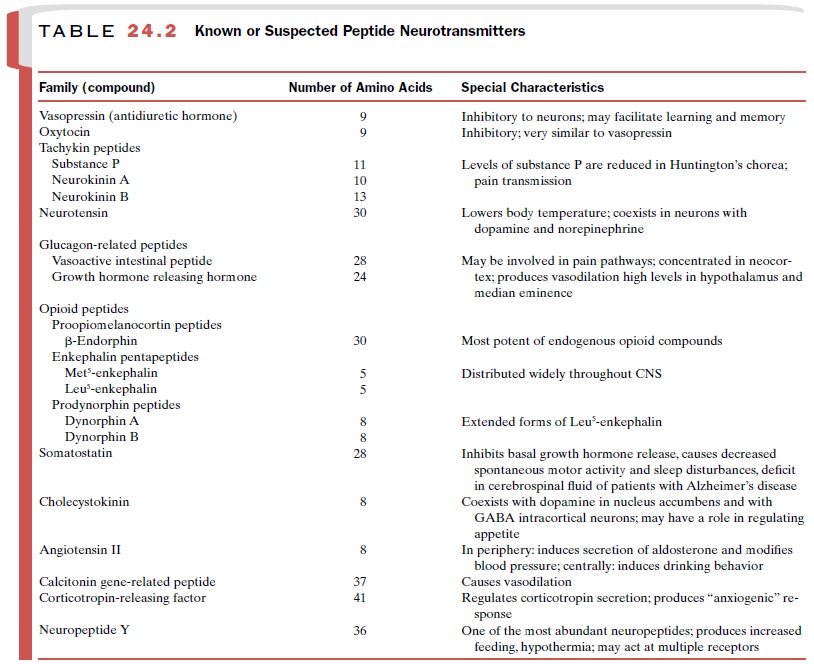