Not all substances in the bloodstream can readily gain entry into the brain. This apparent barrier to drugs and other chemicals is relative rather than absolute, and in fact there are several barriers to substances entering the brain from the systemic circulation. The term blood-brain barrier is usually applied to the lack of passage of certain drugs or other exogenously administered chem-icals into the brain.

There are two physicochemical factors particularly important in allowing a drug to enter the CNS. First, for compounds that are mainly un-ionized at plasma pH (pKa 7.4 or higher), the drug’s solubility in lipids is an important determinant. A lipid-soluble agent can more easily penetrate lipid membranes, such as those found in the CNS. The proportion of drug that is un-ionized is another important determinant. These two properties cannot be completely separated, since un-ionized drugs are generally more lipid soluble than ionized ones.

Location of the Blood-Brain Barrier

The capillaries of the brain are the most likely location of the blood-brain barrier. Brain capillaries differ in several important respects from capillaries in other body locations (Fig. 24.5). For example, the endothelial cells of brain capillaries are so closely joined to each other that passage of substances cannot readily occur through the intercellular clefts between adjacent cells; furthermore, brain capillaries do not contain fenestrae (pores). Fenestrae are prominent in many capillaries, especially those in renal glomeruli and in the chorioid plexus. The ability of a drug to leave a capillary by dif-fusion appears to be directly related to the number of capillary pores. Compared with capillaries at other sites, brain capillaries also appear to possess very few pinocytotic vesicles, which are believed to play a role in the transport of large molecules through capillary walls. 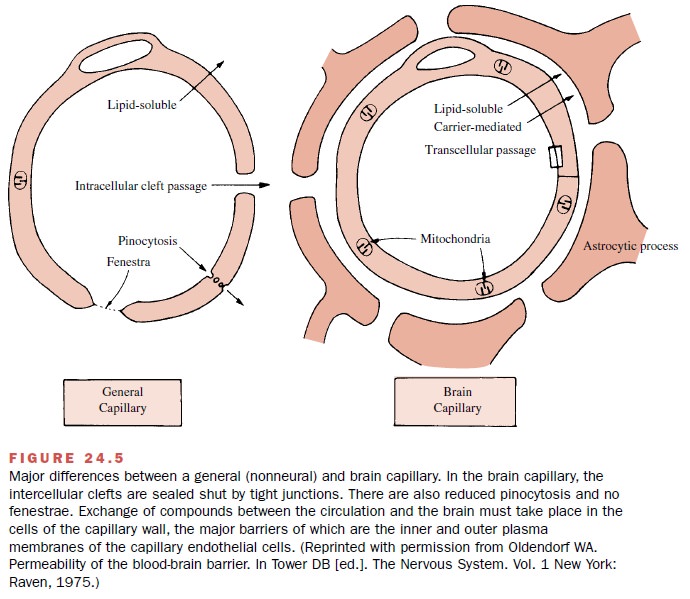 Significance of the Blood-Brain Barrier

It is likely that the blood-brain barrier serves primarily to preserve the internal environment of the brain and prevent sudden increases in concentration of a variety of water-soluble ionized substances, including many cir-culating neurotransmitters, such as norepinephrine, epi-nephrine, ACh, serotonin, and dopamine. The concen-tration in the brain of these bioactive substances appears to be carefully regulated. On the other hand, the biochemical precursors of these transmitters can pass relatively easily, although usually by active trans-port, from the blood to the brain, and this ensures an adequate supply of locally synthesized transmitters. By and large, the precursors are inactive biologically or have only minimal biological activity. The amino acid transmitters GABA, glycine, glutamic acid, and aspartic acid are actively taken up by the brain capillaries, but ordinarily the transport system for these amino acids is close to saturation. Therefore, a sudden increase in blood concentration of these substances would have lit-tle effect on brain levels. Peptide transmitters will not readily penetrate the brain from the circulation, and they are synthesized in the brain.

The blood-brain barrier is not found in all parts of the brain. Certain small areas, including the area postrema beneath the floor of the fourth ventricle, an area in the preoptic recess, and portions of the floor of the third ventricle surrounding the stalk of the pituitary, appear to be devoid of this barrier.

The ability of the blood-brain barrier to exclude en-try of a number of drugs into the brain has several ther-apeutic implications. Many drugs, most notably certain antibiotics, are relatively excluded from the brain. In the treatment of infectious diseases of the CNS, the physi-cian must, in addition to establishing the organism’s drug sensitivity, either select an agent that can get to the site of the infection or use a route (intrathecal) that by-passes the barrier. In the human fetus and newborn, the barrier is not as well developed as it is in later life. This fact also must be taken into consideration when one is prescribing drugs during pregnancy and for neonates .