Intravenous anesthetics are generally employed to in-duce anesthesia, to provide supplemental anesthesia, or to permit anesthesia for short operative procedures. The inhalational anesthetics are most often used for longer-term maintenance of the anesthetic state. Although in-travenous (IV) agents produce anesthesia rapidly, most are metabolized slowly, so recovery may be prolonged when an IV anesthetic is used as the primary drug dur-ing a long surgical procedure. In contrast, while the anesthetic partial pressure of an inhalational agent is achieved slowly, the patient recovers at a clinically ac-ceptable rate.

Intravenously administered anesthetic drugs are espe-cially well suited to accomplish the first requirement of anesthetic management, rapid induction of uncon-sciousness. These compounds generally induce anesthe-sia within one or two circulation times after their ad-ministration because they rapidly achieve initial high concentration in the central nervous system (CNS). These drugs enter the brain because they are quite lipid soluble and consequently diffuse rapidly through all bi-ological membranes, including the blood-brain barrier. In addition, since the brain tissue receives a large pro-portion of the cardiac output, a large proportion of an intravenously administered anesthetic will be distrib-uted to the CNS. Tissues with lower blood flow per unit mass will receive and therefore remove proportionally less anesthetic during the initial phase of drug distribu-tion. This concept is illustrated for thiopental in Fig. 25.1. All IV anesthetic drugs in use show this early pat-tern of distribution. The use of IV anesthetics permits the patient to pass rapidly through the initial stages of anesthesia, and sleep is induced quickly. 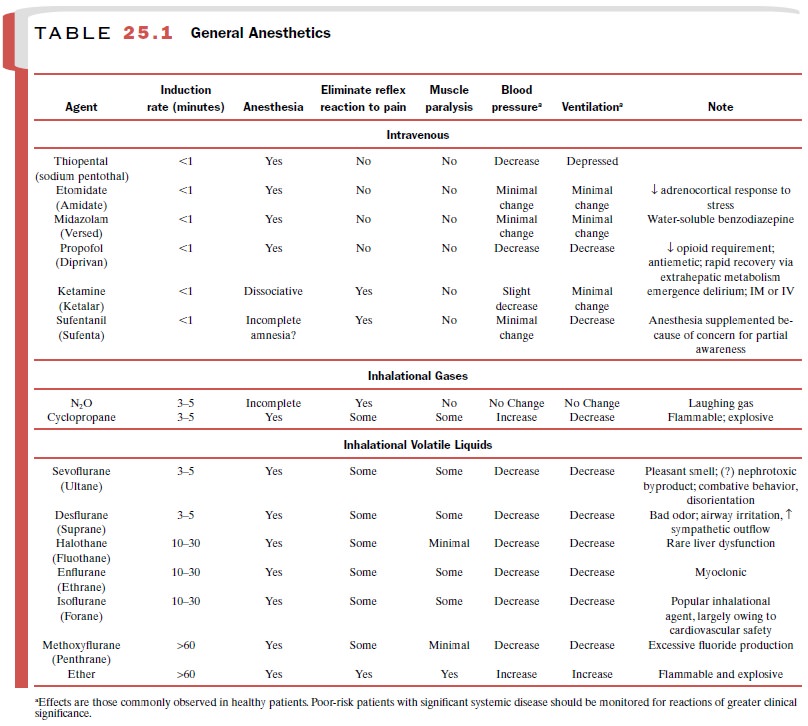 The initial unequal tissueâ€“drug distribution cannot persist, however, because physicochemical forces tend to require an eventual establishment of concentration equilibria with other less well perfused organs. Therefore, as the drug continues to be removed from the blood by the less richly perfused tissues or elimi-nated by metabolism and excretion or both, plasma lev-els will fall, and the concentration of anesthetic in the brain will decline precipitously.

Tissues with an intermediate blood flow per unit of mass, such as skeletal muscle and skin, are among the first to participate in drug redistribution. In fact, it is the patientâ€™s skeletal muscle tissue groups that will contain the largest proportion of the initial dose of anesthetic when the patient awakens (Fig. 25.2). Most of the IV drugs used to induce anesthesia are slowly metabolized and excreted and depend on redistribution to terminate their pharmacological effects. The rate of initial redistri-bution following the administration of a single IV bolus of drug is defined by the half-life (t1/2 ), and is generally about 8 minutes for most anesthetics. It can be said, therefore, that redistribution of IV anesthetics to skele-tal muscle accounts for the return to consciousness after a single sleep dose of these agents. Patients generally awaken 15 to 30 minutes after a single IV injection of most of the commonly used IV anesthetics. 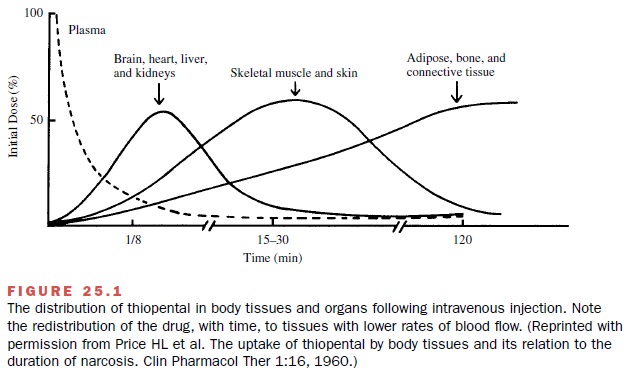 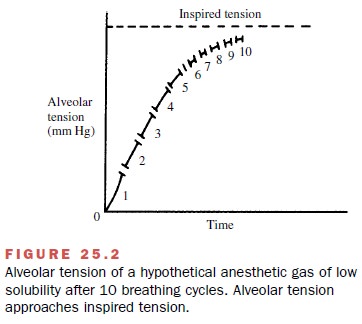 Poorly perfused tissues (adipose tissue, connective tissue, and bone) require hours to come into equilib-rium with plasma drug concentrations (Fig. 25.1). Since the accumulation of anesthetic in body fat is relatively small soon after its IV administration, it is common clin-ical practice to calculate drug dosage on the basis of lean body mass rather than on total body weight. Thus, an obese patient may receive the same dose of IV anes-thetic as a patient of normal body weight.

Since the distribution of blood flow is the dominant factor controlling both tissue drug levels and the accu-mulation of IV anesthetics, changes in cardiac output can be expected to influence the pharmacological ef-fects of the IV anesthetics. Because blood flow to the brain is preserved, a greater proportion of the total dose of anesthetic will be delivered to the brain during times of diminished cardiac output, such as in congestive heart failure or hemorrhage. At such times, smaller doses of anesthetic must be administered to avoid ex-cessive CNS depression.

The use of significantly lower doses of IV anesthetic drug also should be a considera-tion in elderly patients, since they have low cardiac out-put, low lean body mass, and frequently a reduced ca-pacity for drug clearance.

Metabolism and Excretion of Intravenous Drugs

Clearance of IV anesthetics from the body eventually requires metabolism and excretion. Since drugs with long elimination half-lives (t1/2 ) will have slow rates of clearance, their use by repeated IV bolus or continuous infusion to maintain anesthesia has been restricted. Long-term application with limited concern for the pharmacokinetics of the agents may lead to delayed awakening, as large quantities of these drugs may accu-mulate in reservoir tissues, such as skeletal muscle and fat. Thus, after lengthy anesthetic administration, drug plasma levels will remain high as the compound diffuses from these tissue reservoirs. On the other hand, if the duration of an infusion remains short, awakening may be nearly the same with drugs exhibiting short and long elimination half-lives. With a shorter infusion, the quan-tities of drug accumulated in reservoir tissues are not sufficient to maintain high plasma and brain levels. Thus, length of infusion is a context in which the dura-tion of drug action is considered. The term context sen-sitive half-time has been coined to express the effect of duration of infusion (the context) on plasma levels of infused drugs.

The recent advent of computer-assisted IV drug admin-istration has made more practical the maintenance of anesthesia with anesthetics with relatively short half-lives (e.g., propofol and short-acting phenylpiperidine opioids). The technique called total intravenous anesthe-sia (TIVA) is done with short-acting drugs so that rapid recovery occurs even after long infusions. The loading and maintenance doses of each agent can be pro-grammed by taking their individual pharmacokinetic profiles into consideration. Thus, dosage is automati-cally adjusted for factors that may alter drug distribu-tion, parameters controlling drug clearance, and the du-ration of the procedure, to maintain a plasma level that is just adequate for the appropriate depth of anesthesia. Many practitioners, however, still prefer to titrate the infusion of intravenous drugs to effect without the use of computer programming.

The shorter-acting drugs seem to have increasing applications in outpatient surgery, which now accounts for nearly 60% of all elective procedures, and for minor inpatient procedures (e.g., wound repair, bronchoscopy, angiography). Patients generally receive lower doses of drugs so that operative procedures are tolerable, avoid-ing the substantial depression of cardiorespiratory sys-tems that may occur with the higher doses required for hypnosis. Sedative doses of benzodiazepines and propo-fol are among the most common; they are frequently administered in combination with short-acting opioids. The term for such a technique is conscious sedation. Other techniques may also be employed. For example, when an opioid is combined with a neuroleptic drug, such as the butyrophenone droperidol (Inapsine), the technique is called neuroleptanalgesia. An inhalational drug, such as nitrous oxide (N2O), may be added during intervals of the operative procedure when complete anesthesia is desired (i.e., neuroleptanesthesia).