Retroviruses infect many types of cells in mammals. They need dividing cells for successful infection, and will not infect many tissues where host cell growth and division have come to a standstill.

Retroviruses infect many types of cells in mammals. They need dividing cells for successful infection, and will not infect many tissues where host cell growth and division have come to a standstill. Moreover, the genetic material of retroviruses passes through both DNA and RNA stages. This means that introns must be removed from any therapeutic genes before they are cloned into a retrovirus. Despite these extra technical difficulties, a retrovirus has the distinction of carrying the first gene in successful human gene therapy (see later discussion). 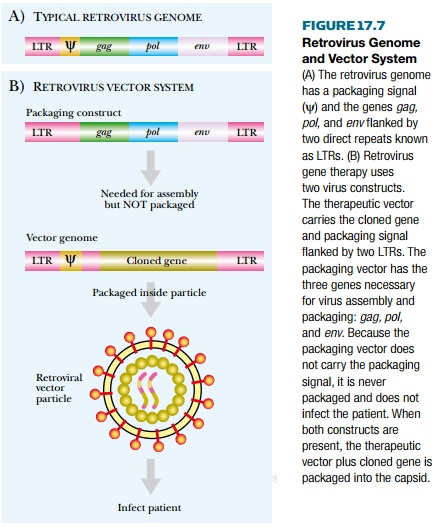 The retrovirus particle has an inner nucleocapsid consisting of an RNA genome inside a protein shell and an outer envelope, derived from the cytoplasmic membrane of the previous host cell. The basic retrovirus genome consists of three genes (gag, pol, and env) enclosed between two long terminal repeats (LTRs), although more complex retroviruses such as HIV have extra genes involved in regulation. The LTR sequences are needed for integration of the DNA version of the virus genome into the host cell DNA. Between the upstream or 5′ LTR and the gag gene is the packaging signal (Fig. 17.7), which is essential for packaging the RNA into the virus particle.

Vectors for gene therapy have been derived from the simpler retroviruses, especially murine leukemia virus (MuLV). The vectors have all the retrovirus genes removed, and as a result they are completely defective in replication. They retain only the packaging signal and the two LTRs (Fig. 17.7) and can carry approximately 6 to 8 kb of inserted DNA. A virus promoter in the 5′ LTR drives expression of the cloned gene. Because the vector lacks gag, pol, and env it cannot make virus particles. Hence these functions must be provided by a packaging construct, a defective provirus that is integrated into the DNA of the producer cell (see Fig. 17.7). The packaging construct lacks the packaging signal, so although it is responsible for manufacture of virus particles, it is not packaged itself. The virus particles generated contain only the retrovirus vector carrying the cloned gene.

After infection of the patient, the RNA inside the retroviral vector is reverse transcribed to give a DNA copy. (Although the retroviral vector does not carry a copy of the reverse transcriptase gene, a few molecules of reverse transcriptase enzyme are packaged in retrovirus particles.) Ideally, the cloned gene, enclosed between the two LTR sequences, is then integrated into host cell DNA. Because the retroviral vectors are completely devoid of genes for retrovirus proteins, they do not cause an immune response or significant inflammation. Furthermore, their ability to integrate into host cell DNA means that the therapeutic gene will become a permanent part of the host cell genome. In principle the retrovirus could integrate into a harmful location, thus disrupting the function of regulation of a host cell gene. In practice, because most DNA in animal cells is noncoding, the chances are low, and only occasional cells would be damaged.

More serious problems are that retroviral vectors can carry only small amounts of DNA (about 8 kb) and cannot infect nondividing cells. However, the lentivirus family of retroviruses (to which HIV belongs) is unusual in being able to infect some nondividing cells. Naturally, using HIV itself is risky, but a future possibility is to transfer this ability into other, safer retroviruses. Alternatively, lentiviruses that infect other mammals, such as FIV (feline immunodeficiency virus), might be used to derive vectors.