Several strategies have been used and may be classified as follows: (a) Gene replacement (b) Direct attack (c) Suicide (d) Immune provocation

Although most cancers are not inherited via the germ line, cancer is nonetheless a genetic disease. In the case of hereditary disease we may attempt to replace the defective component, thus preventing cell death. In contrast, when dealing with a cancer we need to destroy the cancer cells, or at least inhibit their growth and division. Several strategies have been used and may be classified as follows:

Gene replacement therapy for cancer is analogous to its use in correcting hereditary defects. The cancer is analyzed to identify the mutant gene(s) that are responsible. The wild-type version of the oncogene or tumor suppressor gene is then inserted into the cancer cells. For example, the wild-type version of the p53 gene has been delivered to p53-deficient cancer cells. The delivery method is usually via an adenovirus vector, but sometimes liposomes have been used.

In the direct plan of attack, a gene that helps kill cancer cells is used. For example, the TNF gene encodes tumor necrosis factor. This is produced by white blood cells known as tumor-infiltrating lymphocytes (TILs). These cells normally infiltrate into tumors where they release TNF, which is fairly effective at eradicating small cancers. To attack a large cancer that is out of control, TNF production must be increased. First the TNF gene is cloned. Then white blood cells are removed from the patient and cultured. Multiple copies of the TNF gene—or perhaps an improved TNF gene with enhanced activity—are introduced into the white cells. Then the white cells are injected back into the patient.

Although TNF is very effective in killing cancer cells, it is also toxic to other cells. Thus high levels of TNF are dangerous to the patient. There are two sides to this problem. One is limiting TNF or other toxic agents to the cancer cells. The other is getting the toxic agent to the relatively inaccessible cells on the inside of a tumor. A variety of modifications are being tested to solve these problems—for example, putting the TNF gene under control of an inducible promoter and using adenovirus to transfer the gene into cancer cells. The chosen promoter is designed to be induced by agents already used in treating cancer cells, such as radiation or cisplatin. 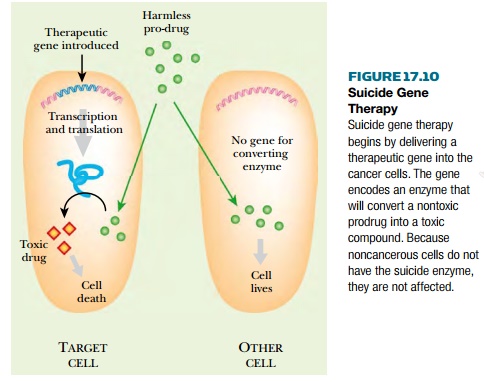 The suicide strategy is actually a hybrid of anticancer drug therapy with gene transfer therapy.

A harmless compound, or prodrug, is chosen that can be converted to a toxic anticancer drug by a specific enzyme. If the enzyme is present, the cell expressing it will commit suicide when the prodrug is available (Fig. 17.10). Consequently, an enzyme that is not present in normal human cells must be chosen for this approach. The gene encoding the suicide enzyme must be delivered to the target cancer cells, usually by a viral vector or in liposomes. If the enzyme is successfully expressed in the cancer tissue, then the toxic drug will be generated inside the cancer cells. Thus the prodrug can be administered to the patient by normal means but is specifically lethal for the cancer cells.

In practice two major suicide enzyme/prodrug combinations have been used. Gene therapy has been used to deliver the enzyme thymidine kinase, originally from herpes virus, to cancer cells. The nontoxic prodrug, the nucleoside analog ganciclovir, is converted to its monophosphate by thymidine kinase (hence its clinical use in treating herpes virus infections). Because only the cancer cells have thymidine kinase, all the noncancerous cells are unaffected. Normal cellular enzymes then convert the monophosphate to ganciclovir triphosphate (GCV-TP). This acts as a DNA chain terminator (Fig. 17.11). DNA polymerase incorporates GCV-TP into growing strands of DNA. However, lack of a 3′-OH group prevents further elongation of the nucleic acid strand. DNA synthesis is thus inhibited and the cell is killed. A similar scheme involves the conversion of 5-fluorocytosine to 5-fluorouracil by cytosine deaminase, originally from bacteria. Again, cellular enzymes finish the job by making the phosphorylated nucleoside that actually inhibits DNA and RNA synthesis. 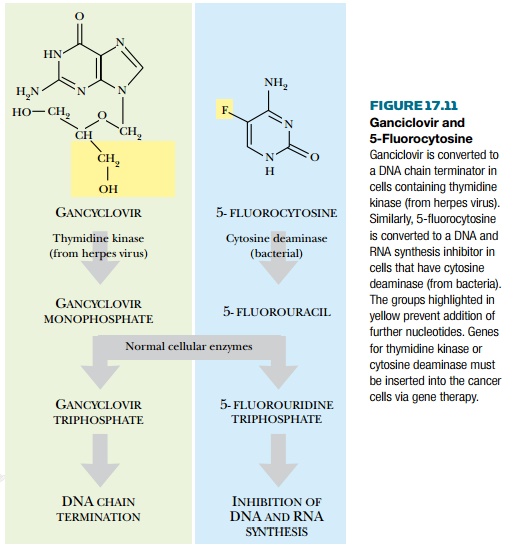 A more indirect approach relies on the body’s natural defenses. Our immune systems are effective at killing cancers, provided they identify them while still small. To survive, a cancer has to somehow evade the body’s immune surveillance. In this approach, gene therapy inserts a gene that attracts the attention of the immune system to the tumor cells. For example, the HLA (= MHC) proteins are exposed on the surfaces of mammalian cells where they act in cell recognition. Different individuals have different combinations of HLA genes, which act as molecular identity tags so that cells of the body are recognized as “self.” If HLA genes that are not originally present in that particular individual are inserted into the cancer cells, the tumor appears alien, and the immune system will now mount an assault.

A related approach is to use cytokines. These are short proteins that attract immune cells and stimulate their division and development. The genes for several cytokines of the interleukin family (especially IL2, IL4, and IL12) have been used to provoke immune attacks on cancer cells.