Severe combined immunodeficiency (SCID) occurs when both the B cells and T cells of the immune system are defective and results in an almost totally defective immune response.

Severe combined immunodeficiency (SCID) occurs when both the B cells and T cells of the immune system are defective and results in an almost totally defective immune response. Children with SCID have to be shielded from all contact with other people and are kept inside special sterile plastic bubble chambers. Without immune protection any disease, even a cold, could prove fatal. Several genetic defects are known that cause SCID. About 25% are due to mutations in the Ada gene that encodes the enzyme adenosine deaminase. This is needed for the metabolism of purine bases, and its absence prevents development of lymphocytes (white blood cells including both the B cells and T cells).

The first successful instance of human gene therapy used a retroviral vector to provide a functional copy of the Ada gene to a child with SCID. The cells affected by SCID are the lymphocytes that circulate in the blood, where they carry out immune surveillance. They are produced by division of bone marrow cells (Fig. 17.8). Gene therapy involves removing bone marrow cells from the patient and maintaining them in cell culture outside the body. Because bone marrow cells constantly replenish the blood supply, they divide often and are suitable for retroviral infection. While in culture, the bone marrow cells are infected with genetically engineered retrovirus carrying the Ada gene and are then returned to the body. 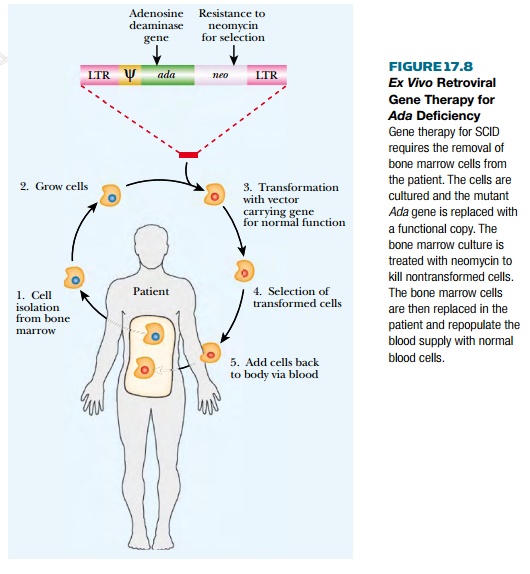 Since 1991, several children have been treated by this approach. However, because T cells live for only 6 to 12 months, the procedure must be repeated at intervals. This problem has been tackled by using blood stem cells, which divide to provide the precursors to all types of blood cells and also give rise to more stem cells. These are found in bone marrow but only in very small numbers. However, umbilical cord blood has a much higher proportion of stem cells. So in 1993, blood stem cells were obtained from the umbilical blood of several newborn babies who were known to carry homozygous defects in Ada. The Ada gene was introduced into the stem cells on a retroviral vector, which has resulted in a long-term supply of healthy T cells.

In all the cases just discussed, the patients have been receiving injections of purified ADA enzyme as well as gene therapy. It is therefore unclear how much of their improvement is due to the gene therapy, even though these patients now have functional T cells in their blood. However, a clear-cut result has been obtained more recently with another variant of SCID. This variant is due to defects in the receptor for several interleukins, including IL-7, a protein that promotes development of T cells from stem cells. Because B cells need helper T cells in order to function, both B and T cells are inactive. In this case, the gene for the missing subunit of the IL-7 receptor was inserted into cultured stem cells using a retroviral vector.

Because purified protein is not used in treating this type of SCID, the patients had to depend on gene therapy alone. The patients did develop normal numbers of T cells and were successfully vaccinated against several infectious diseases, indicating a proper immune response. Consequently they were able to leave their bubbles and enjoy normal lives. Although most of the dozen patients treated so far are still doing well, one developed leukemia, presumably due to retrovirus insertion into other genes. Thus the use of retrovirus for gene therapy needs further safeguards before it can be used more routinely.