Because of the problems with using adenovirus discussed above, other DNA viruses have been considered as vectors.

Because of the problems with using adenovirus discussed above, other DNA viruses have been considered as vectors. Although none are yet widely used, the adeno-associated virus (AAV) shows considerable promise. AAV is a defective or “satellite” virus that depends on adenovirus (or some herpes viruses) to supply some necessary functions. Consequently, it is usually found in cells that are infected with adenovirus. Unlike adenovirus, AAV seems to be entirely harmless.

The benefits of using AAV are as follows:

(a) It does not stimulate inflammation in the host.

(b) It does not provoke antibody formation and can therefore be used for multiple treatments.

(c) It infects a wide range of animals, as long as an appropriate helper virus is also present. It can therefore be cultured in many types of animal cells, including those from mice or monkeys.

(d) It can enter nondividing cells of many different tissues, unlike adenovirus.

(e) The unusually small size of the virus particle allows it to penetrate many tissues of the body effectively.

(f) AAV integrates its DNA into a single site in the genome of animal cells (the AAVS1 site on chromosome 19 in humans). This allows the therapeutic gene to be  permanently integrated.

One drawback is that the AAV genome is small (4681 nucleotides of single-stranded DNA) and the virus can carry only a relatively short segment of DNA. (AAV is unusual in packaging both plus and minus strands into virus particles. Although each virus particle contains only one ssDNA molecule, a virus preparation contains a mixture of particles, half with plus and half with minus strands.) On entering a host cell, the DNA is converted to the double-stranded replicative form, or RF, which is used for both replication and transcription. In the absence of helper virus, AAV integrates into the host chromosome and becomes latent. 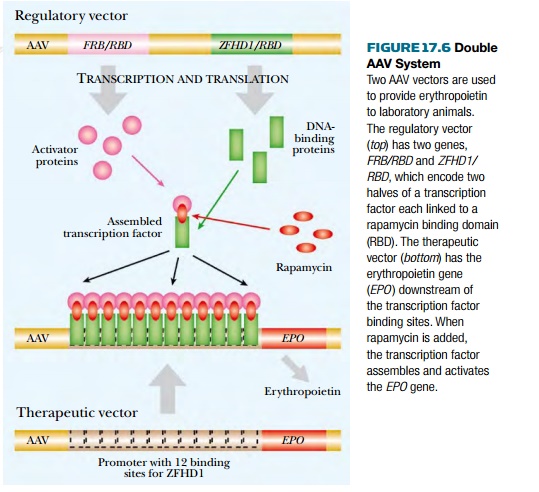 Genes that are permanently integrated need to be carefully regulated. This may be tackled by using two AAV vectors. Mice and monkeys have been experimentally treated with a double AAV system that provides erythropoietin, a protein required for development of red blood cells. One AAV vector carries the gene for erythropoietin with a promoter that must be activated by a transcription factor. The second AAV vector carries an artificial regulatory system (Fig. 17.6). This consists of two genes encoding hybrid proteins, each with one domain of the transcription factor. The other domain binds rapamycin (used as an immunosuppressant). In the presence of rapamycin, the two hybrid proteins associate via their rapamycin binding domains to form a functional transcription factor. This activates erythropoietin expression.

After delivery of the two vectors to mice, there was no production of erythropoietin. But when the animals were injected with rapamycin, the transcription factor was assembled and the erythropoietin gene was activated. The levels of erythropoietin increased up to 100-fold and the number of red blood cells rose. Even after several months, injection of rapamycin triggered a sharp rise in erythropoietin levels. Preliminary studies are now being performed in cystic fibrosis patients with AAV vectors carrying the CFTR gene.