Antisense RNA and Other Oligonucleotides

Antisense RNA binds to the corresponding messenger RNA and prevents its translation by the ribosome. Antisense RNA and related antisense nucleic acids are now being tested for possible therapeutic effects.

ANTISENSE RNA AND OTHER OLIGONUCLEOTIDES

Antisense RNA binds to the corresponding messenger RNA and prevents its translation by the ribosome. Antisense RNA and related antisense nucleic acids are now being tested for possible therapeutic effects. In most cases, the objective is to inhibit the expression of a target gene. Two main alternatives exist when using antisense RNA. First, it is possible to use a full-length anti-gene that is transcribed to give a full-length antisense RNA. The anti-gene must be carried on a suitable vector and expressed in the target cells. Second, much shorter artificial RNA oligonucleotides may be used. An antisense RNA of 15 to 20 nucleotides is often capable of binding specifically to part of the complementary mRNA and preventing translation.

The use of a full-length anti-gene has been tested experimentally against cancer cells in culture. Malignant glioma is the most common form of human brain cancer. Here the glial cells, which form the interstitial tissue between nerve cells, grow and divide in an uncontrolled manner. Often this is due to overproduction of insulin-like growth factor 1 (IGF1), which stimulates the growth and division of these cells. A vector carrying an anti-IGF1 gene was constructed by using the cDNA version of the IGF1 gene and simply reversing its orientation (Fig. 17.12). The anti-IGF1 gene was placed under control of the metallothionein promoter, which responds to trace levels of heavy metals. The vector was inserted into glioma cells in culture. Adding a low concentration of zinc sulfate turned on the anti-IGF1 gene, and the cancer cells stopped dividing and no longer caused tumors if injected into rats. 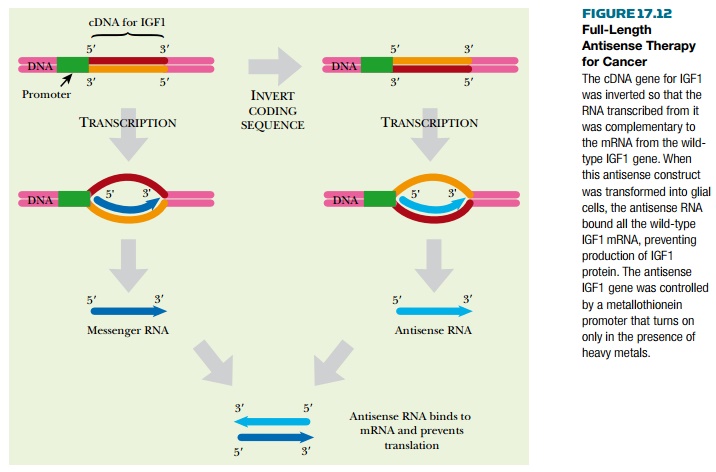 Artificial RNA oligonucleotides may be aimed at a variety of possible sites on the target RNA. They may be designed to block the 5′-end of a transcript, thus preventing translation from beginning. However, other sites within the mRNA are often just as effective. It is also possible to make an antisense oligonucleotide that blocks the splice site of the primary transcript and so prevents formation of the mature mRNA by the spliceosome (Fig. 17.13). 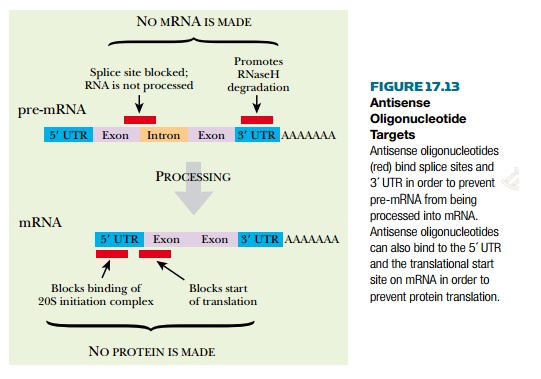 Antisense RNA oligonucleotides are not very stable and are taken up poorly by many cells. Use of liposomes to deliver antisense RNA may overcome the uptake problem. Another way to overcome the first problem is to use modified oligonucleotides. Antisense segments made of DNA rather than RNA are just as effective, are easier to synthesize, and are more stable than RNA. Oligonucleotides with phosphorothioate linkages are more stable than those with phosphodiester linkages. Those made of peptide nucleic acid are extremely stable.

Antisense reagents are being tested against malaria because of the shortage of effective antimalarial drugs and the growing global incidence of this disease. Antisense oligonucleotides (actually made of DNA with phosphorothioate linkages) have been used experimentally to block synthesis of aldolase by Plasmodium falciparum, the agent of the malignant form of malaria. Aldolase is the fourth enzyme of the glycolytic pathway, and the blood stages of P. falciparum depend almost entirely on energy from glycolysis. The antisense molecules targeted both the splice sites on the precursor RNA and the translation start site on the mature mRNA. Aldolase activity dropped, the malarial parasites ran short of energy, and growth and division of the parasites were greatly reduced. Antisense reagents targeting topoisomerase II and Clag9 (needed for attachment to CD36 protein of red blood cells) are also being tested.