The organization of the genome of different types of retroviruses .

The organization of the genome of different types of retroviruses is shown in Figure 42 – 4 (see also Table 42 – 1). The order of the genes for a typical retrovirus is gag – pol – env. The gag (group-specific antigen) gene encodes the structural proteins of the virus and, in somecases, the protease. The pol (polymerase) gene encodes the reverse transcriptase, the inte-grase, and sometimes the protease. The env (envelope) gene encodes the two membrane glycoproteins found in the viral envelope. Not surprisingly, the SU protein (gp120 in HIV-1) is responsible for the host range of the virus and its antigenicity. 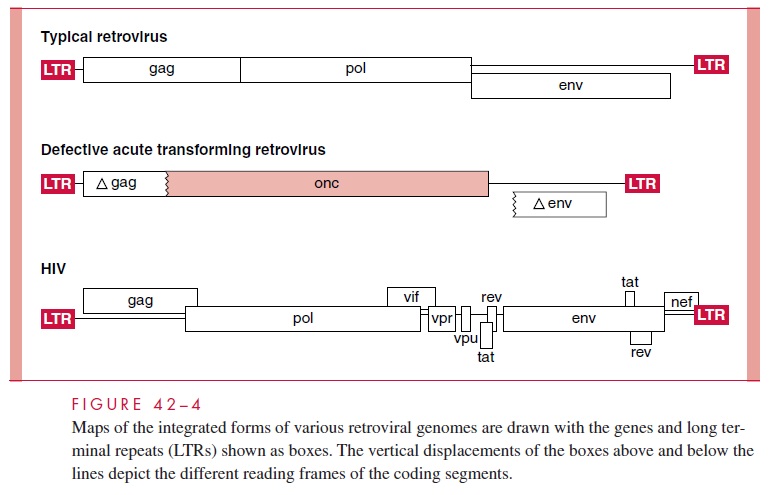 The genomes of acute transforming oncoviruses have a variety of structures, but one feature is common to nearly all of them: some viral genes are replaced by genes derived from their hosts that render them oncogenic . In every case, the signals re-quired for reverse transcription and for transcription of the provirus, which are located near the ends of the RNA, are retained in the infecting virus. In the example shown in Figure 42 – 4, the pol gene and parts of both the viral gag and env genes are deleted, but other configurations are possible. Such oncoviruses are defective and replicate only in the presence of a helper virus that can supply the missing functions. 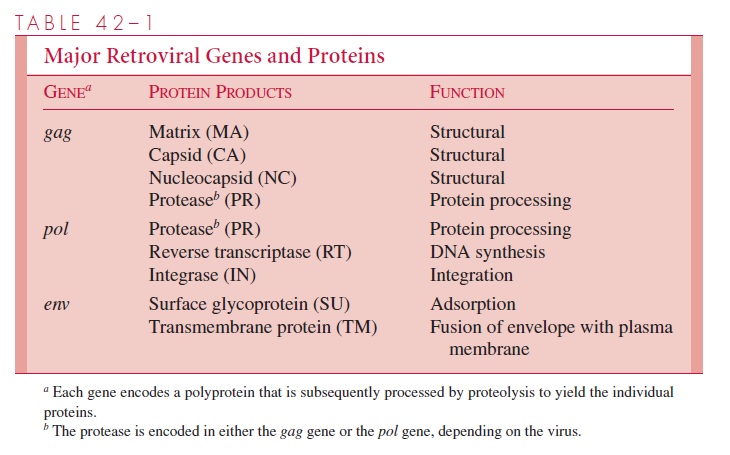 A comparison of the genetic makeup of HIV-1 with that of a typical retrovirus (see Fig 42 – 4) reveals a larger number of genes and a much more complex organization. HIV-1 contains, in addition to the gag, pol, and env genes, an array of other genes (tat, rev, nef,vif, vpr, and vpu). Expression of these genes requires mRNA splicing, and all apparentlyencode proteins that serve regulatory or accessory roles during the infection . HTLV-1 encodes the regulatory proteins, Tax and Rex, which are analogous to the HIV-1 Tat and Rev proteins. The names of the genes that have been best characterized and the proteins and functions they determine are listed in Table 42 – 2.