The initial infection is followed by an asymptomatic period that, in most cases, con-tinues for years before the disease becomes clinically apparent.

In 1993, the Centers for Disease Control and Prevention (CDC) definition of AIDS stated that all patients who are HIV antibody – positive and have CD4+ T-lymphocyte counts below 200/mm3 or less than 14% of total T lymphocytes have the disease. The initial in-fection with HIV is usually asymptomatic, although in some cases a mononucleosis-like illness develops 2 to 4 weeks after infection and lasts about 2 to 6 weeks. This illness may exhibit any or all of the following: fever, malaise, lymphadenopathy, hepatosplenomegaly, arthralgias, and rash. Sometimes a mild aseptic meningitis is also present. Whether or not these early manifestations of infection occur, the virus persists and integrates into the genome of some host cells, and the individual is thus infected for life.

The initial infection is followed by an asymptomatic period that, in most cases, con-tinues for years before the disease becomes clinically apparent. During this time virus can be isolated from blood, semen, and the cervix. Approximately 50% of infected individu-als develop significant disease within 10 years of infection, and the number continues to increase thereafter. It is expected that nearly all HIV-infected individuals eventually develop some clinical aspects of this infection, although long-term ( >1 years) nonpro-gressors are well documented.

Approximately 5% of infected, untreated patients show no decrease in CD4 counts over a period of more than 10 years, but ultimately many of these individuals begin to progress. However, since the late 1990s, the increases in early diag-nosis, combined with more aggressive, highly active antiretroviral therapy (HAART) in the United States, have shown promise in delaying progression of infection to death (Figs 42 – 5, 42–6). 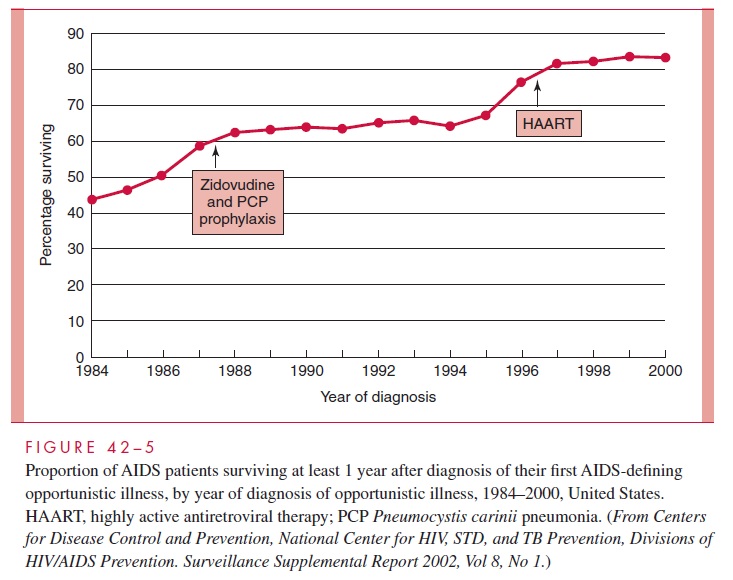 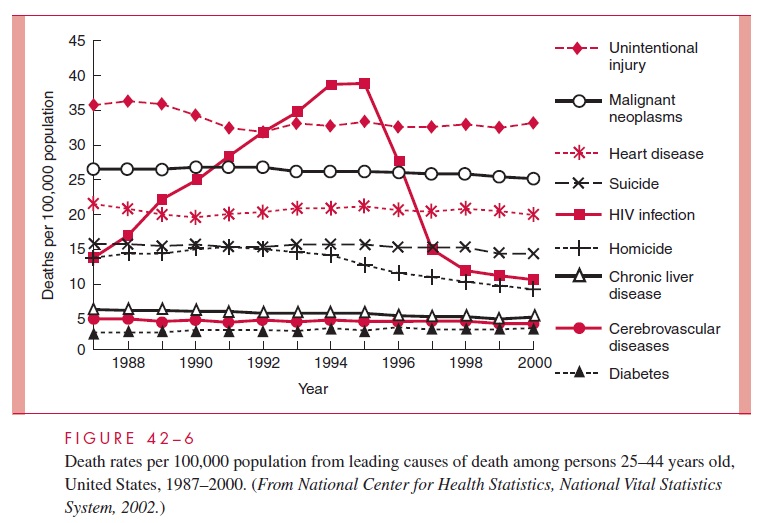 Patients with full-blown AIDS experience a wide spectrum of infections depending on the severity of their immune defect and on the opportunistic organisms in their normal flora or with which they come in contact (Table 42 – 3). Some clinical manifestations of AIDS may thus vary by locale. For example, disseminated histoplasmosis is a common complication in the Midwest of the United States, as disseminated toxoplasmosis is in France. These infections are uncommon in areas where the diseases are not endemic. The diversity and anatomic sites of infection vary between patients, and any one patient may have several infections. The most common infection is pneumocystosis, and approxi-mately 50% of AIDS patients who do not receive prophylaxis for pneumocystosis develop Pneumocystis carinii pneumonia. In the past, about 25% of all AIDS patients de-veloped Kaposi’s sarcoma, but the number of cases has been falling in the United States despite increasing numbers of cases of AIDS. The apparent explanation is that Kaposi’s sarcoma is due to a transmitted agent different from HIV, the Kaposi’s sarcoma her-pesvirus (KSHV); the spread of this organism has diminished as high-risk sexual behav-ior has decreased especially among homosexual men. Disease due to mycobacteria of the Mycobacterium avium-intracellularecomplex is common, and AIDS patients are alsohighly susceptible to Mycobacterium tuberculosis infection. Oral thrush and esophagitis due to Candida albicans and meningitis due to Cryptococcus are commonly encountered fungal infections. Persistent progressive mucocutaneous herpes simplex and herpes zoster infections are common. CMV chorioretinitis is one of the most common opportunistic in-fections and may result in unilateral or bilateral blindness. Disseminated cytomegalovirus (CMV) infection is also seen and presents with fever and visceral (eg, gastrointestinal) or-gan involvement. 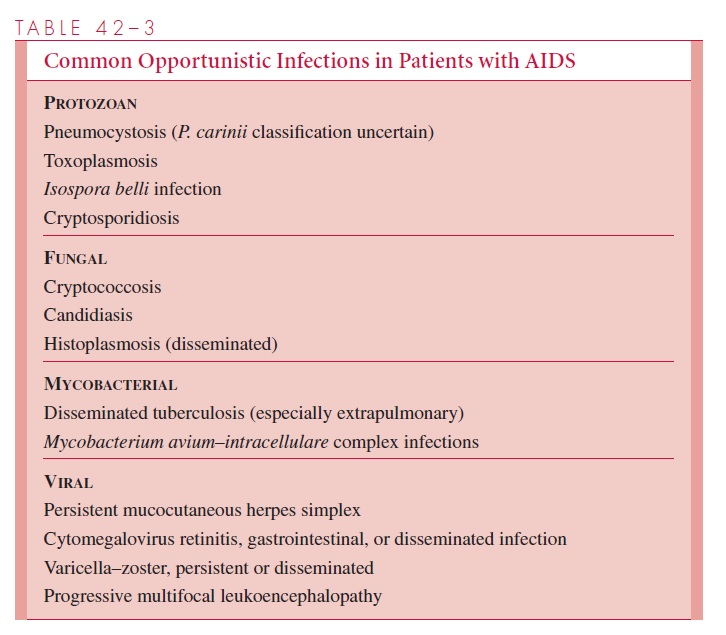 As the duration of survival of AIDS patients became longer due to therapy with the earli-est drugs, an increased number developed neurologic manifestations of the disease and lym-phoid neoplasms, especially non-Hodgkin’s lymphomas. HIV is a neurotropic virus and can be isolated from the cerebrospinal fluid of 50 to 70% of patients. CNS involvement may be asymptomatic, but many patients develop a subacute neurologic illness that produces clinical symptoms varying from mild cognitive dysfunction to severe dementia. Loss of complex cognitive function is usually the first sign of illness. Progression to severe memory loss, de-pression, seizures, and coma may ensue. Cerebral atrophy involving primarily cortical white matter can be demonstrated by computed tomography or magnetic resonance imaging. His-tologically, focal vacuolation of the affected brain tissue with perivascular infiltration of macrophages is noted. Multinucleated giant cells with syncytium formation surround the perivascular infiltrates. Neurologic symptoms do notusually occur until CD4+ T-lympho-cyte counts are below 200 cells/mm3.

The disease spectrum in Africa is similar in many respects to that in the Western world, but many more patients present with severe intractable wasting and diarrhea, known as slim disease. Tuberculosis is also more commonly encountered in AIDS pa-tients in Africa, reflecting the higher incidence of the disease in the population in general. The 2-year mortality of AIDS, once the disease has been fully established, was initially 75%, with nearly all persons eventually dying of opportunistic infections or neoplasms. Recent advances in therapy have slowed progression of the disease. Combination therapy, with the inclusion of inhibitors of HIV protease, appears to be responsible for dramatic improvement in many patients, but toxicity or the development of resistance may limit their long-term usefulness. Progression of AIDS and the development of these neurologic manifestations have become less common with the advent of highly active antiretroviral therapy (HAART).