Although one’s respiratory ability is of relatively little concern in the performance of sprint types of athletics, it is critical for maximal performance in endurance athletics.

Although one’s respiratory ability is of relatively little concern in the performance of sprint types of athletics, it is critical for maximal performance in endurance athletics.

Normal oxygen consumption for a young man at rest is about 250 ml/min. However, under maximal conditions, this can be increased to approximately the following average levels:

Figure 84–6 shows the relation between oxygen con-sumption and total pulmonary ventilation at differentlevels of exercise. It is clear from this figure, as would be expected, that there is a linear relation. Both oxygen consumption and total pulmonary ventilation increase about 20-fold between the resting state and maximal intensity of exercise in the well-trained athlete. 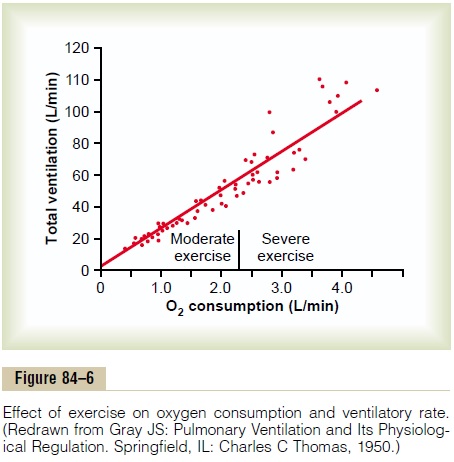 Limits of Pulmonary Ventilation. How severely do we stressour respiratory systems during exercise? This can be answered by the following comparison for a normal young man:

Thus, the maximal breathing capacity is about 50 per cent greater than the actual pulmonary ventilation during maximal exercise. This provides an element of safety for athletes, giving them extra ventilation that can be called on in such conditions as (1) exercise at high altitudes, (2) exercise under very hot conditions, and (3) abnormalities in the respiratory system.

Effect of Training on VO2 Max. The abbreviation for the rate of. oxygen usage under maximal aerobic metabolism is VO2 Max. Figure 84.–7 shows the progressive effect of athletic training on VO2 Max recorded in a group of sub-jects beginning at the level of no training and then pur-suing the training program for. 7 to 13 weeks. In this study, it is surprising that the VO2 Max increased only about 10 per cent. Furthermore, the frequency of train-ing, whether two times or five. times per week, had little effect on the. increase in VO2 Max. Yet, as pointed out earlier, the VO2 Max of a marathoner is about 45 per cent greater than. that of an untrained person. Part of this greater VO2 Max of the marathoner probably is genetically determined; that is, those people who have greater chest sizes in relation to body size and stronger respiratory muscles select themselves to become marathoners. However, it is also likely that many years of training increase the marathoner’s  VO2  Max by values considerably greater than the 10 per cent that has been recorded in short-term experiments such as that in Figure 84–7. 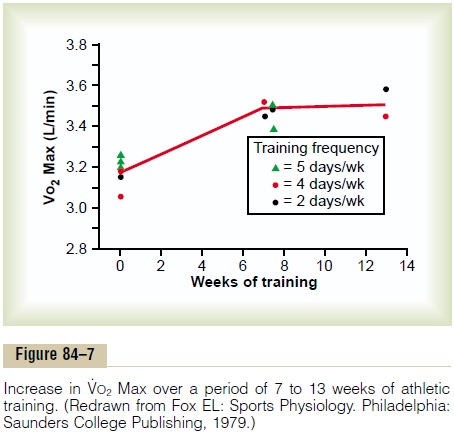 Oxygen Diffusing Capacity of Athletes.  Theoxygen diffusing capacity is a measure of the rate at which oxygen can diffuse from the pulmonary alveoli into the blood. This is expressed in terms of milliliters of oxygen that will diffuse each minute for each millimeter of mercury dif- ference between alveolar partial pressure of oxygen and pulmonary blood oxygen pressure. That is, if the partial pressure of oxygen in the alveoli is 91 mm Hg and the oxygen pressure in the blood is 90 mm Hg, the amount of oxygen that diffuses through the respiratory mem- brane each minute is equal to the diffusing capacity. The following are measured values for different diffusing capacities:

It is also clear from these values that those athletes who require greater amounts of oxygen per minute have higher diffusing capacities. Is this because people with naturally greater diffusing capacities choose these types of sports, or is it because something about the training procedures increases the diffusing capacity? The answer is not known, but it is very likely that training, particu- larly endurance training, does play an important role.

Blood Gases During Exercise.  Because of the great usage of oxygen by the muscles in exercise, one would expect the oxygen pressure of the arterial blood to decrease markedly during strenuous athletics and the carbon. Both of these values remain nearly normal, demon-strating the extreme ability of the respiratory system to provide adequate aeration of the blood even during heavy exercise.

This demonstrates another important point: The blood gases do not always have to become abnormal for respiration to be stimulated in exercise. Instead, respiration is stimulated mainly by neurogenic mechanisms during exercise. Part of this stimulation results from direct stimulation of the respiratory center by the same nervous signals that are transmitted from the brain to the muscles to cause the exercise. An additional part is believed to result from sensory signals transmitted into the respiratory center from the contracting muscles and moving joints.All this extra nervous stimulation of respiration is normally sufficient to provide almost exactly the necessary increase in pulmonary ventilation required to keep the blood respiratory gases—the oxygen and the carbon dioxide— very near to normal.

Effect of Smoking on Pulmonary Ventilation in Exercise.

It iswidely known that smoking can decrease an athlete’s “wind.” This is true for many reasons. First, one effect of nicotine is constriction of the terminal bronchioles of the lungs, which increases the resistance of airflow into and out of the lungs. Second, the irritating effects of the smoke itself cause increased fluid secretion into the bronchial tree, as well as some swelling of the epithelial linings.Third, nicotine paralyzes the cilia on the surfaces of the respiratory epithelial cells that normally beat continuously to remove excess fluids and foreign particles from the respiratory passageways. As a result, much debris accumulates in the passageways and adds further to the difficulty of breathing. Putting all these factors together, even a light smoker often feels respiratory strain during maximal exercise, and the level of performance may be reduced.

Much more severe are the effects of chronic smoking. There are few chronic smokers in whom some degree of emphysema does not develop. In this disease, the following occur: (1) chronic bronchitis, (2) obstruction of many of the terminal bronchioles, and (3) destruction

of many alveolar walls. In severe emphysema, as much as four fifths of the respiratory membrane can be destroyed; then even the slightest exercise can cause respiratory distress. In fact, many such patients cannot even perform the simple feat of walking across the floor of a single room without gasping for breath.