Effect of Athletic Training on Muscles and Muscle Performance

Importance of Maximal Resistance Training. One of the car-dinal principles of muscle development during athletic training is the following: Muscles that function under no load, even if they are exercised for hours on end, increase little in strength.

Effect of Athletic Training on Muscles and Muscle Performance

Importance of Maximal Resistance Training. One of the car-dinal principles of muscle development during athletic training is the following: Muscles that function under no load, even if they are exercised for hours on end, increase little in strength. At the other extreme, muscles that contract at more than 50 per cent maximal force of contraction will develop strength rapidly even if the contractions are performed only a few times each day. Using this principle, experiments on muscle building have shown that six nearly maximal muscle contractions performed in three sets 3 days a week give approxi-mately optimal increase in muscle strength, without producing chronic muscle fatigue. 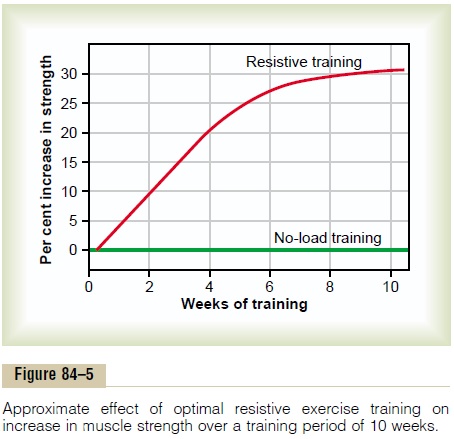 In old age, many people become so sedentary that their muscles atrophy tremendously. In these instances, muscle training often increases muscle strength more than 100 per cent.

Muscle Hypertrophy. The average size of a person’smuscles is determined to a great extent by heredity plus the level of testosterone secretion, which, in men, causes considerably larger muscles than in women. With train-ing, however, the muscles can become hypertrophied perhaps an additional 30 to 60 per cent. Most of this hypertrophy results from increased diameter of the muscle fibers rather than increased numbers of fibers, but this probably is not entirely true, because a very few greatly enlarged muscle fibers are believed to split down the middle along their entire length to form entirely new fibers, thus increasing the number of fibers slightly.

Fast-Twitch and Slow-Twitch Muscle Fibers. In the humanbeing, all muscles have varying percentages of fast-twitch and slow-twitch muscle fibers. For instance, thegastrocnemius muscle has a higher preponderance of fast-twitch fibers, which gives it the capability of force-ful and rapid contraction of the type used in jumping. In contrast, the soleus muscle has a higher preponder-ance of slow-twitch muscle fibers and therefore is used to a greater extent for prolonged lower leg muscle activity.

The basic differences between the fast-twitch and the slow-twitch fibers are the following:

1.Fast-twitch fibers are about twice as large in diameter.

In summary, fast-twitch fibers can deliver extreme amounts of power for a few seconds to a minute or so. Conversely, slow-twitch fibers provide endurance, delivering prolonged strength of contraction over many minutes to hours.

Hereditary  Differences  Among  Athletes  for  Fast-Twitch  Versus Slow-Twitch Muscle Fibers. Some people have considerablymore fast-twitch than slow-twitch fibers, and others have more slow-twitch fibers; this could determine to some extent the athletic capabilities of different individuals. Athletic training has not been shown to change the rel-ative proportions of fast-twitch and slow-twitch fibers however much an athlete might want to develop one type of athletic prowess over another. Instead, this seems to be determined almost entirely by genetic inheritance, and this in turn helps determine which area of athletics is most suited to each person: some people appear to be born to be marathoners; others are born to be sprinters and jumpers. For example, the following are recorded percentages of fast-twitch versus slow-twitch fiber in the quadriceps muscles of different types of athletes: