Muscle Blood Flow. A key requirement of cardiovascular function in exercise is to deliver the required oxygen and other nutrients to the exercising muscles.

Muscle Blood Flow. A key requirement of cardiovascular function in exercise is to deliver the required oxygen and other nutrients to the exercising muscles.

For this purpose, the muscle blood flow increases drastically during exercise. Figure 84–8 shows a recording of muscle blood flow in the calf of a person for a period of 6 minutes during moderately strong intermittent con-tractions. Note not only the great increase in flow— about 13-fold—but also the flow decrease during each muscle contraction. Two points can be made from this study: (1) The actual contractile process itself temporarily decreases muscle blood flow because the contracting skeletal muscle compresses the intramuscu-lar blood vessels; therefore, strong tonic muscle con-tractions can cause rapid muscle fatigue because of lack of delivery of enough oxygen and other nutrients during the continuous contraction. (2) The blood flow to muscles during exercise increases markedly. The fol-lowing comparison shows the maximal increase in blood flow that can occur in a well-trained athlete.

Thus, muscle blood flow can increase a maximum of about 25-fold during the most strenuous exercise. Almost one half this increase in flow results from intra-muscular vasodilation caused by the direct effects of increased muscle metabolism. The remaining increase results from multiple factors, the most important of which is probably the moderate increase in arterial blood pressure that occurs in exer-cise, usually about a 30 per cent increase. The increase in pressure not only forces more blood through the blood vessels but also stretches the walls of the arteri-oles and further reduces the vascular resistance. 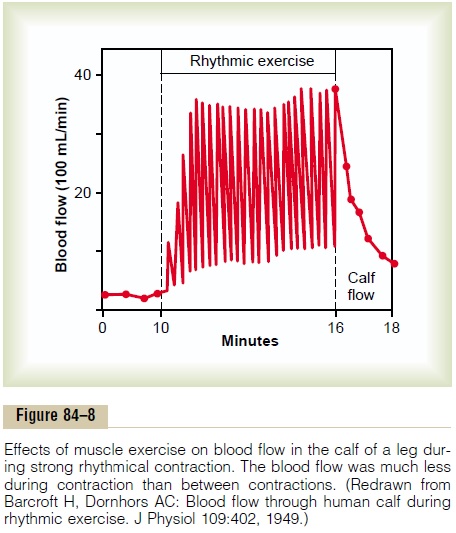 Therefore, a 30 per cent increase in blood pressure can often more than double the blood flow; this multiplies the great increase in flow already caused by the meta-bolic vasodilation at least another twofold.

Thus, the normal untrained person can increase cardiac output a little over fourfold, and the well-trained athlete can increase output about sixfold. (Individual marathoners have been clocked at cardiac outputs as great as 35 to 40 L/min, seven to eight times normal resting output.) 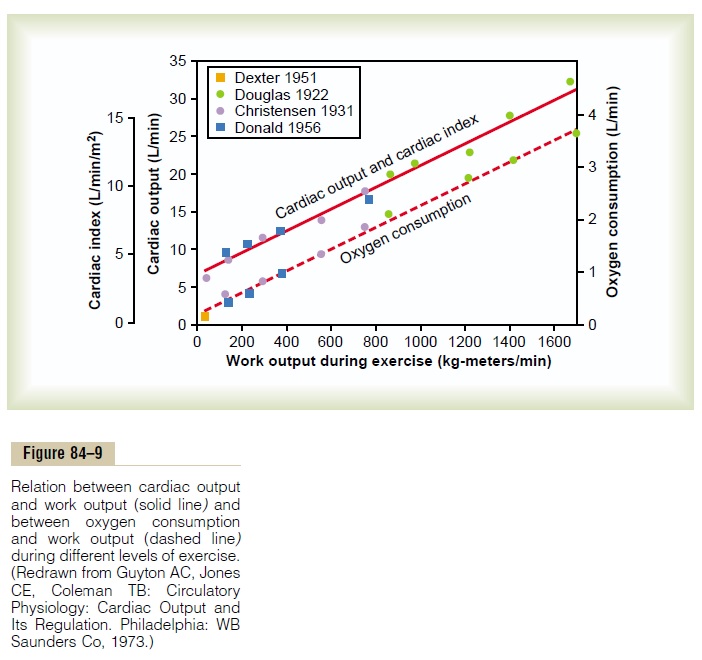 Effect of Training on Heart Hypertrophy and on Cardiac Output.

From the foregoing data, it is clear that marathoners can achieve maximal cardiac outputs about 40 per cent greater than those achieved by untrained persons. This results mainly from the fact that the heart chambers of marathoners enlarge about 40 per cent; along with this enlargement of the chambers, the heart mass also increases 40 per cent or more. Therefore, not only do the skeletal muscles hypertrophy during athletic train-ing but the heart does also. However, heart enlargement and increased pumping capacity occur almost entirely in the endurance types, not in the sprint types, of ath-letic training.

Even though the heart of the marathoner is consid-erably larger than that of the normal person, resting cardiac output is almost exactly the same as that in the normal person. However, this normal cardiac output is achieved by a large stroke volume at a reduced heart rate. Table 84–2 compares stroke volume and heart rate in the untrained person and the marathoner. 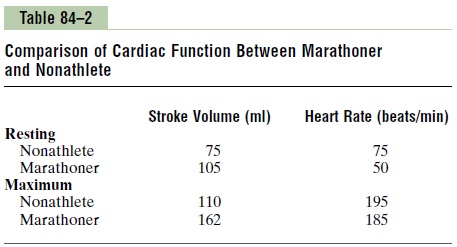 Thus, the heart-pumping effectiveness of each heart-beat is 40 to 50 per cent greater in the highly trained athlete than in the untrained person, but there is a cor-responding decrease in heart rate at rest. 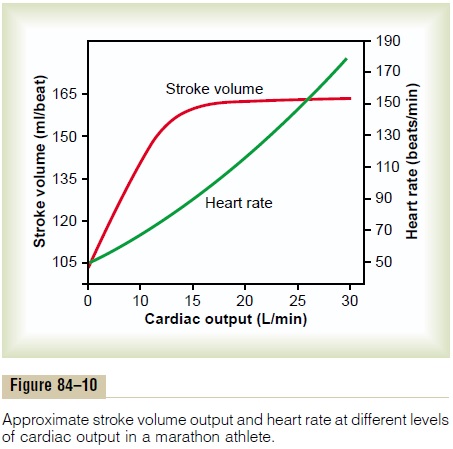 Relation of Cardiovascular Performance to VO2 Max. Duringmaximal exercise, both the heart rate and the stroke volume are increased to about 95 per cent of their maximal levels. Because the cardiac output is equal to stroke volume times heart rate, one finds that the cardiac output is about 90 per cent of the maximum that the person can achieve. This is in contrast to about 65 per cent of maximum for pulmonary ventilation. There-fore, one can readily see that the cardiovascular. system is normally much more limiting on VO2 Max than is the respiratory system, because oxygen utilization by the body can never be more than the rate at which the car-diovascular system can transport oxygen to the tissues.

For this reason, it is frequently stated that the level of athletic performance that can be achieved by the marathoner mainly depends on the performance capa-bility of his or her heart, because this is the most limit-ing link in the delivery of adequate oxygen to the exercising muscles. Therefore, the 40 per cent greater cardiac output that the marathoner can achieve over the average untrained male is probably the single most important physiologic benefit of the marathoner’s training program.

Effect of Heart Disease and Old Age on Athletic Performance.

Because of the critical limitation that the cardiovascu-lar system places on maximal performance in endurance athletics, one can readily understand that any type of heart disease that reduces maximal cardiac output will cause an almost corresponding decrease in achievable total body muscle power. Therefore, a person with con-gestive heart failure frequently has difficulty achieving even the muscle power required to climb out of bed, much less to walk across the floor.

The maximal cardiac output of older people also decreases considerably—there is as much as a 50 per cent decrease between age 18 and age 80. Also, there is even more decrease in maximal breathing capacity. For these reasons, as well as reduced skeletal muscle mass, the maximal achievable muscle power is greatly reduced in old age.