Respiration is the act of inhalation and exhalation of air

Respiration is the act of inhalation and exhalation of air

The normal respiration rates are 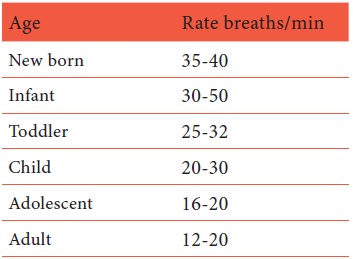 1.        Sex: respirations are generally more rapid in females than in males

3.        Emotions: such as fear influence respiration

4.        Heat: such as hot water or hot both causes increase in rate and decrease in depth of breathing

9.        Coma and brain injuries – cause decrease in respiration rate.

1.        The patient must be at rest and unaware that respiration is being taken. It is therefore wise to take while keeping fingers on the pulse

3.        Count each rise and fall as on respiration count for a full minute

d)       Any discomfort or difficulty in breathing

Hypoventilation - Rate and depth of respiration is very slow

Pulse oxymeter is a device useful to measure the oxygen level (oxygen saturation of the blood) It is an easy painless measure of how well oxygen is being send to parts of the body. At the same time it measures the pulse rate also.