SPATIAL RESOLUTION: It is a measure of the smallest angular or linear separation between two? objects that can be resolved by the sensor.

Spatial resolution is a complex concept which can, for the purpose of remotesensing of polar regions, be defined as the smallest object that can be detected and distinguished from a point. The most frequently used measure, based upon the geometriC properties of an imaging system, is the instantaneous field of view (IFOV) of a sensor. The IFOV is the area on the surface that is theoretically viewed by the Instrument from a given altitude at a given time. The spatial resolution is usually determined by instrumental parameters and by the height of the satellite above the ground. With the exception of active microwave systems, the resolution of a system cannot be better than approximately HIID (the diffraction limit), where H is the height, I is the wavelength and 0 is the diameter of the objective lens, objective mirror or antenna. This limit is typically of the order of 10 to 100 m for VIS and IR systems operating from satellites in low orbits, and typically 1 to 10 km when the satellite is geostationary. For passive microwave observations, the resolution limit is much coarser (of the order of tens of km) because of the larger wavelength measured.

It was stated that the best achievable spatial resolution is of the order of HI/D (except for some types of radar system), although some non-radar systems may not reach this resolution because of other instrumental effects. Two important examples are sensors in which the incoming radiation is focused on to an image array of discrete detecting elements, and photographic systems. The detecting element or film imposes its own maximum resolution, again proportional to the height H and, if this is poorer than the diffraction-limited resolution, it will dominate.

The spatial resolution achievable by radar systems is very dependent on theway the data from the system are processed. Such systems are often pulsed, and one important factor is the length of the emitted pulse. Synthetic aperture radars (SARs) also integrate the return signal for a period of time while the radar is carried forward on its platform, and the integration time also influences the resolution. It is not possible to give here a statement of the general principles determining radar spatial resolution, and the interested reader is referred to treatments given by Ulaby, Moore and Fung (1981 and 1982), Elachi (1987) and Rees (1990). Spatial resolution of an imaging system can be measured in a number of different ways. It is the size of the smallest object that can be discriminated by the sensor. The greater the sensor's resolution, the greater the data volume and smaller the area covered. In fact, area coverage and resolution are interdependent and these two factors determine the scale of an imagery. Altematively, spatial resolution can be said to be the length of the size of the area on the ground represented by a pixel on an image. The basIs for the definition of spatial resolution can depend on four criteria, namely, : (i) Geometrical properties of the imaging system, (ii) the ability to distinguish between point targets, (iii) the ability to meaSllre the periodicity of repetitive targets, and (iv) the ability to measure the spectral properties of small targets (Mather, 1999).

Spatial resolution of any satellite sensor applies to the image produced by thesystem, whereas resolving power of any photograph applies to an imaging system or a component of the system. As mentioned earlier, the most commonly used measure for spatial resolution of any sensor, based on the geometric properties of the imaging system, is the Instantaneous Field of View (IFOV) of a sensor. IFOV is defined as thearea on the ground that is viewed by an instrument from a given altitude at any given instant of time. Fig. 2.3 illustrates the relationship between the swath width and the IFOV. The IFOV can be measured in one of the two ways, (i) by measuring angle "a"and (ii) by measuring the distance XY on the ground. 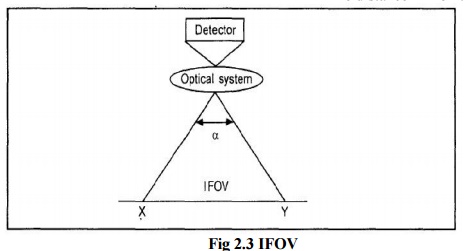 It refers to the dimension and number of specific wavelength intervals in the electromagnetic spectrum to which a sensor is sensitive. Narrow bandwidths in certain regions of the electromagnetic spectrum allow the discrimination of various features more easily. Temporal resolution: It refers to how often a given sensor obtains imagery of a particular area. Ideally, the sensor obtains data repetitively to capture unique discriminating characteristics of the phenomena of interest.

It is the width of the spectral band and the number of spectral bands in whichthe image is taken. Narrow band widths in certain regions of the electromagnetic spectrum allow us to discriminate between the various features more easily. Consequently, we need to have more number of spectra! bands, each having a narrow bandwidth, and these bands should together cover the entire spectral range of interest. The digital images collected by satellite sensors except microwave sensing systems like Seasat, SIR B Radarsat, have been multi-band or multispectral, individual images separately recorded in discrete spectral bands. Multispectral imaging refers to viewing a given area in several narrow bands to obtain better identification andclassification of objects. Multistage imaging refers to the observations of the same area from different positions of the platforms (stereoscopic data). Multistage imaging refers to the observations made over the same area on different dates to monitor the objects like crop growth. This is also called temporal resolution. The term spectral resolution refers to the width of the spectral bands. Spectral resolution can be explained by considering two points,

(i) the position of the spectrum, width and number of spectral bands will determine the degree to which individual targets can be determined on the multispectral image, and (ii) the use of multispectral imagery can lead to a higher degree of discriminating power than any single band taken on its own.