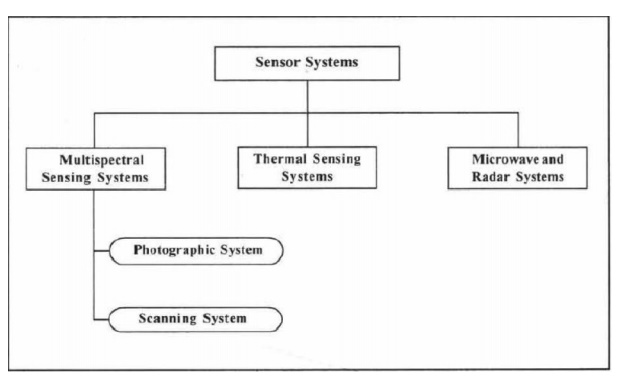 Components of sensor systems operating in the visible, infrared, thermaland microwave regions of the electromagnetic spectrum are described in this section.

Components of sensor systems operating in the visible, infrared, thermaland microwave regions of the electromagnetic spectrum are described in this section.Although analogue photographic imagery has many advantages, this book is mainly concerned with image data collected by scanning systems that ultimately generate digital image products. It is apparent that the useful wavebands are mostly in the visible and the infrared for passive remote sensing detectors and in the radar and microwave region for active type of sensors. Accordingly the imaging sensor systemsin remote sensing are classified as shown in Fig.2.4

In the case of multiband photographic system, different parts of the spectrumare sensed with different film-filter combinations. Multiband digital camera images and video images are also typically exposed on to the camera's CCD or CMOS sensor (s) through different filters. Electro-optical sensors, such as, the thematic mapper of Landsat, typically sense in atleast several bands of electromagnetic spectrum. 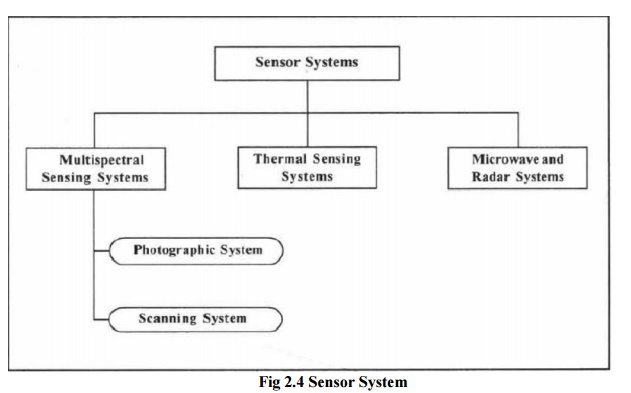 The photographic system suffers from one major defect of considerable distortion at the edges. This is due to a large lens opening. From lens theory, we know that distortions can be minimised and resolution considerably improved by using a narrow beam of light. This can be achieved by a system called scanning system. A multispectral scanner (MSS) operates on the same principle of selective sensing in multiple spectral bands, but such instruments can sense in many more bands and over a great range of the electromagnetic spectrum. Because of the advancement in utilising electronic detectors, MSS can extend the range of sensing

from 0.3 flm to 14 flm. Further MSS can sense in very narrow bands. Multispectral scanner images are acquired by means of two basic process: across-track and along-track scanning. Multispectral scanner systems build up two-dimensional images of the terrain for a swath beneath the platform. Across-track systems are also called whisk broom scanner systems. This type of scanning system scans the terrain along scanlines that are right angles to the direction of the spaceborne/airborne platform. Fig. 4.8 illustrates the operation across-track system.

In this type of scanning system, scanner repeatedly measures the energy from one side of the aircraft to the other. Data are collected within an arc below the aircraft typically of 900 to 1200. Successive scan lines are covered as the aircraft moves forward, yielding a series of contiguous or narrow strips of observation comprising a two-dimensional image of rows (scan lines) and columns. At any instant, the scanner'sees' the energy within the systems IFOV. This explains the spatial resolution of the sensing.

The second type of multispectral scanning system is along-track scanning systemor push broom systems. This type of scanners record multiband image data along a swath beneath an aircraft. As the aircraft/spacecraft advances in the forward direction, the scanner scans the earth with respect to the designed swath to build a twodimensional image by recording successive scanlines that are oriented at right angles to the direction of the aircraft/spacecraft.

Thermal scanner is one of the most important thermal sensing systems, particular kind of across track multispectral scanner which senses in the thermal portion of the electromagnetic spectrum by means of inbuilt detectors. These systems are restricted to operating in either 3 to 5 I-lm or 8 to 14 I-lm range of wavelengths. The operation and the efficiency of this type of scanning systems are based on thecharacteristics of the detectors. Quantum or photon detectors are typically used to detect the thermal radiation. These detectors operate on the principle of direct interaction between photons of radiation incident on them and the energy levels of electrical charge carriers within the detector material. 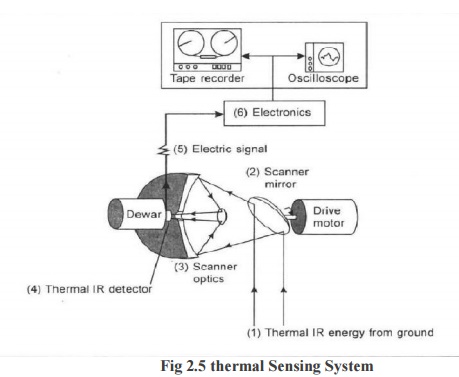 The fundamental principle of microwave sensing and the conceptual design of radar have been discussed in chapter 3, where it is stated that the microwave region of the electromagnetic spectrum includes radiation with wavelengths longer than 1 mmImaging. Microwave instruments do not, however, rely on the detection of solar or terrestrial emissions. In the following sections of this chapter, the properties of the operational synthetic aperture radar (SAR) systems and Radarsat systems are presented along with other sensing systems.