National Aeronautics and Space Administration (NASA) of USA with the cooperation of the U.S. Department of Interior planned the launching of a series of Earth Resources Technology Satellites (ERTS). ERTS-1 was launched by a ThorDelta rocket on July 23, 1972 and it operated until January 6,1978. It represented the first unmanned satellite designed to acquire data about the earth resources on a systematic, repetitive, medium resolution, multispectral basis. Subsequently, NASA renamed the ERTS programme as "Landsat" programme to distinguish it from the series of meteorological and oceanographic satellites that the USA launched later. ERTS-1 was retrospectively named Landsat-1. Five Landsat satellites have been launched so  far and this experimental programme has evolved into an operational global resource monitoring programme. Three different types of sensors have been flown in various combinations on the five missions. These are Return Beam Vidicon (RBV) camera system, the Multispectral Scanner (MSS) system and the Thematic Mapper (TM).

Characteristics of Landsat     Satellites and Their       Sensors: 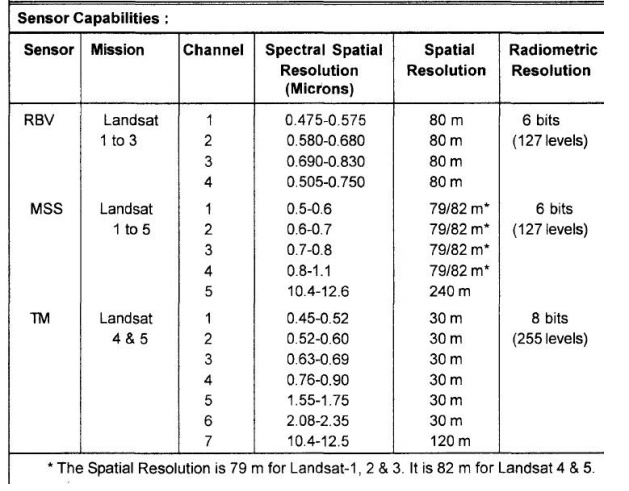 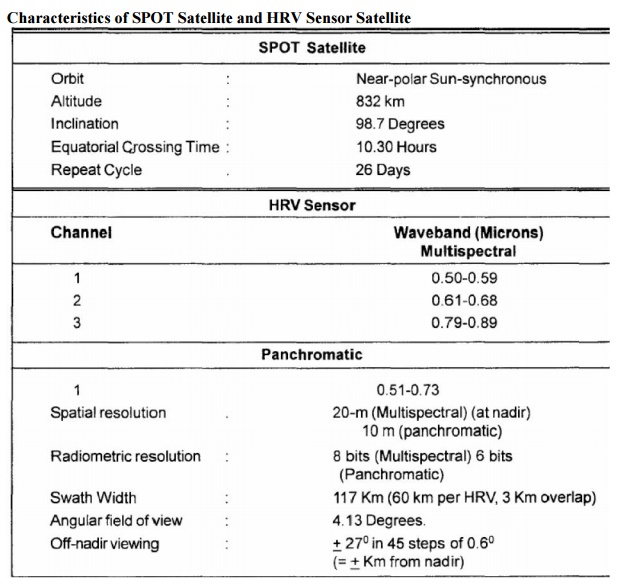 The IRS mission envisages the planning and implementation of a satellite based remote sensing system for evaluating the natural resources. The principal components of  the mission are: a three axis stabilised polar sunsynchronous satellite withmultispectral sensors, a ground based data reception, recording and processingsystems for the multispectral data, ground systems for the in-orbit satellite controlincluding the tracking network with the associated  supporting systems, and hardwareand software elements for the generation of user oriented data products, data analysis and archival. The principal aim of the IRS mission is to use the satellite data in conjunction with supplementary/complementary information from other sources forsurvey and management of natural resources in important areas, such as, agriculture, geology and hydrology in association with the user agencies. IR$ series of satellites are IRS lA, IRS IB, IRS IC, IRS ID and IRS P4 apart from other satellites which were launched by the Government of India. The orbital and sensor characteristics of IRS IAand IB are the same and IRS IC and IRS ID have almost similar characteristics. IRSP4is an oceanographic satellite, and this will be discussed in the next section. IRS has application potential in a wide range of disciplines such as management of agricultural resources, inventory of forest resources, geological mapping, estimation of water resources, study of coastal hydrodynamics, and water quality surveying. The sensor payload system consists of two push broom cameras (LiSS-II) of36.25 m resolution and one camera .(LlSS-I) of 72.5 m resolution employing linear Charge Coupled Device (CCD) arrays as detectors. Each camera system images in four spectral bands in the visible and near IR region. The camera system consists of collecting optics, imaging detectors, inflight calibration equipment, and processing

devices. The orbital characteristics of the IRS-1A, 1 B satellites and the sensorcapabilities are given in Table 4.3. As IRS-1 D satellite is the latest satellite of theseries and hence the system overview of IRS - 1 D is provided.

The IRS-1 D is a three-axes body stabilized satellite, similar to IRS-1 C. SinceIRS-1 C and 1 D are similar in orbital characteristics and sensor capabilities, the detailsof IRS-1 D are discussed as it is a very recent satellite. It will have an operational lifeof three years in a near polar sun synchronous orbit at a mean altitude of 780 Km. The payload consists of three sensors, namely, Panchromatic camera (PAN), linear imaging and self-scanning sensor (LiSS-III) and wide Field sensor (WiFs). The satellite is equipped with an On-Board Tape Recorder (OBTR) capable of recording limited amount of specified sensor data. Operation of each of the sensors can be programmed.

The payload operation sequence for the whole day can be loaded daily on to theon-board command memory when the satellite is within the visibility range. The ground segment consists of a Telemetry Tracking and Command (TTC) segment comprisinga TTC network, and an Image segment comprising data acquisition, data processing and product generation system along with data dissemination centre. The over view of IRS-1 D mission is to provide optimum satellite operation and a mission control centre for mission management, spacecraft operations and scheduling. The three sensors on board IRS-1 D and IRS-1 C are described in the following paragraph.

The panchromatic camera provides data with a spatial resolution of 5.2-5.8 m(at nadir) and a ground swath between 63 Km -70 Km (at nadir). It operates in the0.50 - 0.75 microns spectral band. This camera can be steered upto ± 26 deg. storable upto ±398 Km across the track from nadir, which in turn increases the revisit capability to 3 days for most part of the cycle and 7 days in some extreme cases. 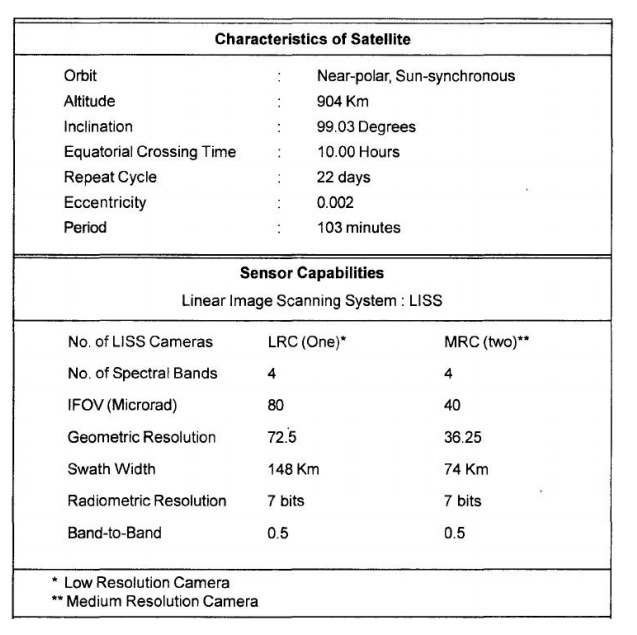