Cerebral perfusion pressure (CPP) is the dif-ference between mean arterial pressure (MAP)cand intracranial pressure (ICP) (or central venous pressure [CVP], if it is greater than ICP).

Moderate to severe increases in ICP (>30 mm Hg) can compromise CPP and CBF, even in the presence of a normal MAP. Patients with CPP values less than 50 mm Hg often show slowing on the EEG, whereas those with a CPP between 25 and 40 mm Hg typically have a flat EEG. Sustained perfusion pressures less than 25 mm Hg may result in irrevers-ible brain damage.

Much like the heart and kidneys, the brain nor-mally tolerates a wide range of blood pressure, with little change in blood flow. The cerebral vasculature rapidly (10–60 s) adapts to changes in CPP. Decreases in CPP result in cerebral vasodila-tion, whereas elevations induce vasoconstriction. In normal individuals, CBF remains nearly con-stant between MAPs of about 60 and 160 mm Hg (Figure26–2). Beyond these limits, blood flow becomes pressure dependent. Pressures above 150–160 mm Hg can disrupt the blood–brain bar-rier  and may result in cerebral edema and hemorrhage. The cerebral autoregulation curve (Figure 26–2) is shifted to the right in patients with chronic 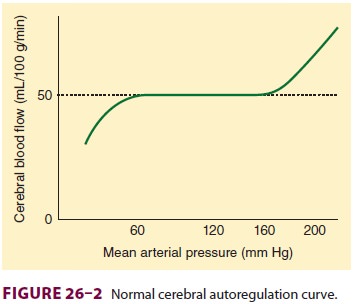 The most important extrinsic influences on CBF are respiratory gas tensions particularly Paco2. CBF is directly proportionate to Paco2 between tensions of 20 and 80 mm Hg (Figure26–3). Blood flow changes approximately 1–2 mL/100 g/min per mm Hg change in Paco2. This effect is almost immediate and is thought to 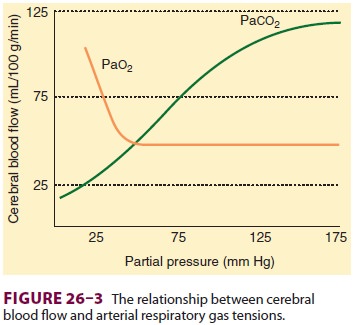 be secondary to changes in the pH of CSF and cerebral tissue. Because ions do not readily cross the blood–brain barrier  but CO 2 does, acute changes in Paco2 but not HCO3– affect CBF. Thus, acute metabolic acidosis has little effect on CBF because hydrogen ions (H+) cannot readily cross the blood–brain barrier. After 24–48 hr, CSF HCO3– concentration adjusts to compensate for the change in Paco2, so that the effects of hypocapnia and hypercapnia are diminished. Marked hyper-ventilation (Paco2< 20 mm Hg) shifts the oxygen– hemoglobin dissociation curve to the left, and, with changes in CBF, may result in EEG changes suggestive of cerebral impairment, even in normal individuals.

CBF changes 5% to 7% per 1°C change in tem-perature. Hypothermia decreases both CMRand CBF, whereas hyperthermia has the reverse effect. Between 17°C and 37°C, the Q10 for humans is approximately 2—that is, for every 10° increase in temperature, the CMR doubles. Conversely, the CMR decreases by 50% if the temperature of the brain falls by 10°C (eg, from 37°C to 27°C) and another 50% if the temperature decreases from 27°C to 17°C. At 20°C, the EEG is isoelectric, but further decreases in temperature continue to reduce CMR throughout the brain. Hyperthermia (above 42°C) may result in neuronal cell injury.

Intracranial vessels are innervated by the sympa-thetic (vasoconstrictive) and parasympathetic (vaso-dilatory) systems, Intense sympathetic stimulation induces vasoconstriction in these vessels, which can limit CBF. Autonomic innervation may also play an important role in cerebral vasospasm following brain injury and stroke.