Overall, most general anesthetics have a favorable effect on the CNS by reducing electrical activity. Determination of the effects of the specific agents is complicated by the concomitant administration of other drugs, surgical stimulation, intracranial compliance, blood pressure, and CO2 tension. For example, hypocapnia blunts the increases in CBF and ICP that usually occur with ketamine and vola-tile agents.

This section describes the changes gener-ally associated with each drug when given alone. Table 26–1 summarizes and compares the effectsof the various anesthetics. The effects of vasoactive agents and neuromuscular blocking agents are also discussed. 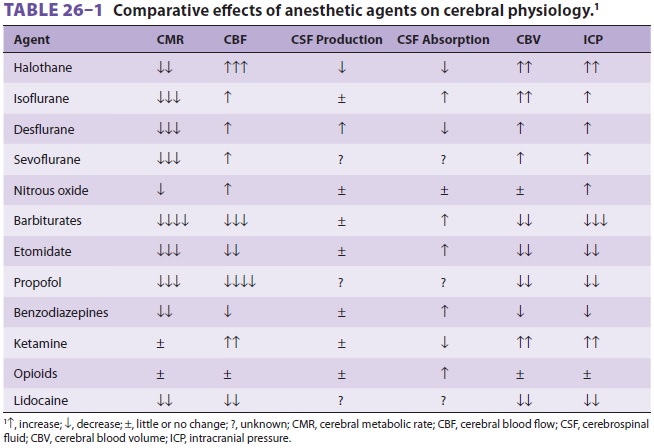 Halothane, desflurane, sevoflurane, and isoflu-rane produce dose-dependent decreases in CMR. Isoflurane produces the greatest maximal depres-sion (up to 50% reduction), whereas halothane has the least effect (<25% reduction). The effects of des-flurane and sevoflurane seem to be similar to that of isoflurane. No further reduction in CMR is pro-duced by doses of anesthetics or other drugs greater than the doses that render the EEG isoelectric.

At normocarbia, volatile anesthetics dilate cere-bral vessels and impair autoregulation in a dose-dependent manner (Figure 26–7). Halothane has the greatest effect on CBF; at concentrations greater than 1%, it nearly abolishes cerebral autoregulation. Moreover, the increase in blood flow is generalized throughout all parts of the brain. At an equivalent minimum alveolar concentration (MAC) and blood pressure, halothane increases CBF up to 200%, 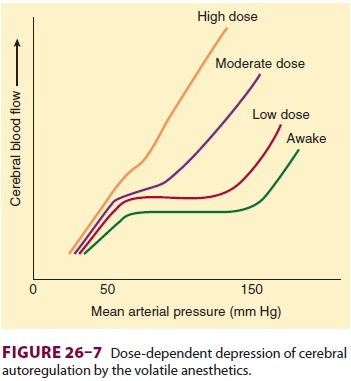 compared with 20% for isoflurane. Qualitatively and quantitatively, desflurane may be closest to isoflu-rane. Sevoflurane produces the least cerebral vaso-dilation. The effect of volatile agents on CBF also seems to be time dependent, because, with contin-ued administration (2–5 h), blood flow begins to return to normal.

As is apparent from the discussion above, volatile agents alter, but do not uncouple, the normal rela-tionship of CBF and CMR. The combination of a decrease in neuronal metabolic demand with an increase in CBF (metabolic supply) has been termed luxury perfusion. In contrast to this potentially ben-eficial effect during global ischemia, a detrimen-tal circulatory steal phenomenon is possible with volatile anesthetics in the setting of focal ischemia. Volatile agents can increase blood flow in normal areas of the brain, but not in ischemic areas, where arterioles are already maximally vasodilated. The end result may be a redistribution (“steal”) of blood flow away from ischemic to normal areas.

Volatile anesthetics affect both formation and absorption of CSF. Halothane impedes absorptionof CSF, but only minimally retards formation. Isoflurane, on the other hand, facilitates absorption and is therefore an agent with favorable effects on CSF dynamics.

The net effect of volatile anesthetics on ICP is the result of immediate changes in cerebral blood vol-ume, delayed alterations on CSF dynamics, and arterial CO2 tension. Based on these factors, isoflu-rane and sevoflurane seem to be the volatile agents of choice in patients with decreased intracranial compliance.

The effects of nitrous oxide are influenced by other agents or changes in CO2 tension. Thus, when com-bined with intravenous agents, nitrous oxide has minimal effects on CBF, CMR, and ICP. Adding this agent to a volatile anesthetic, however, can fur-ther increase CBF. When given alone, nitrous oxide causes mild cerebral vasodilation and can poten-tially increase ICP.

With the exception of ketamine, all intra-venous agents either have little effect onor reduce CMR and CBF. Moreover, with some exceptions, changes in blood flow generally par-allel those in metabolic rate. Cerebral autoregula-tion and CO2 responsiveness are preserved with all agents.

Barbiturates have four major actions on the CNS:

hypnosis, (2) depression of CMR, (3) reduction of CBF due to increased cerebral vascular resis-tance, and (4) anticonvulsant activity. Barbiturates produce dose-dependent decreases in CMR and CBF until the EEG becomes isoelectric. At that point, maximum reductions of nearly 50% are observed; additional barbiturate dosing does not further reduce metabolic rate. Unlike isoflurane,barbiturates reduce metabolic rate uniformly throughout the brain. CMR is depressed slightly more than CBF, such that metabolic supply exceeds metabolic demand (as long as CPP is maintained). Because barbiturate-induced cerebral vasoconstric-tion occurs only in normal areas, these agents tend to redistribute blood flow from normal to ischemic areas in the brain (Robin Hood, or reverse steal phenomenon). The cerebral vasculature in ischemic areas remains maximally dilated and is less affected by the barbiturate because of ischemic vasomotor paralysis.

Barbiturates also seem to facilitate absorption of CSF. The resultant reduction in CSF volume, com-bined with decreases in CBF and cerebral blood volume, makes barbiturates highly effective in low-ering ICP. Their anticonvulsant properties are also advantageous in neurosurgical patients who are at increased risk of seizures.

Opioids generally have minimal effects on CBF, CMR, and ICP, unless Paco2 rises secondary to respiratory depression. Increases in ICP have been reported in some patients with intracranial tumors following administration of sufentanil and to a lesser degree, alfentanil. The mechanism seems to be a precipitous drop in blood pressure; reflex cere-bral vasodilation likely increases intracranial blood volume and potentially ICP. Significant decreases in blood pressure can adversely affect CPP, regardless of the opioid selected. In addition, small doses of alfentanil (<50 mg/kg) can activate seizure foci in patients with epilepsy. Morphine is generally not considered optimal as a component of anesthe-sia for intracranial surgery. Morphine’s poor lipid solubility results in slow CNS penetration and pro-longed sedative effects. Normeperidine, a metabo-lite of meperidine, can induce seizures, particularly in patients with renal failure. The accumulation of normeperidine and the associated cardiac depres-sion limit the use of meperidine, except in small doses to treat shivering.

Etomidate decreases the CMR, CBF, and ICP in much the same way as thiopental. Its effect on CMR is nonuniform, affecting the cortex more than the brainstem. Its limited effect on the brainstem may be responsible for greater hemodynamic stability during anesthesia induction, compared with that of barbiturates. Etomidate also decreases production and enhances absorption of CSF.

Induction with etomidate is associated with a relatively high incidence of myoclonic movements, but these movements are not associated with seizure activity on the EEG in normal individuals. The drug has been used to treat seizures, but reports of seizure activity following etomidate suggest that the drug is best avoided in patients with a history of epilepsy. In fact, small doses of etomidate can activate seizure foci in patients with epilepsy.

Propofol reduces CBF and CMR, similar to bar-biturates and etomidate; however, the decrease in CBF may exceed that in metabolic rate. Although it has been associated with dystonic and chorei-form movements, propofol seems to have signifi-cant anticonvulsant activity. Moreover, its short elimination half-life makes it a useful agent for neuroanesthesia. Propofol infusion is commonly used for maintenance of anesthesia in patients with or at risk of intracranial hypertension. Propofol is by far the most common induction agent for neuroanesthesia.

Benzodiazepines lower CBF and CMR, but to a lesser extent than barbiturates, etomidate, or propofol. Benzodiazepines also have useful anti-convulsant properties. Midazolam is the benzo-diazepine of choice in neuroanesthesia because of its short half-life. Midazolam used as an induction agent frequently causes decreases in CPP in elderly and unstable patients and may result in prolonged emergence.

Ketamine is the only intravenous anesthetic that dilates the cerebral vasculature and increases CBF (50% to 60%). Selective activation of cer-tain areas (limbic and reticular) is partially offset by depression of other areas (somatosensory and auditory) such that total CMR does not change. Seizure activity in thalamic and limbic areas is also described. Ketamine may also impede absorp-tion of CSF without affecting formation. Increases in CBF, cerebral blood volume, and CSF volume can potentially increase ICP markedly in patients with decreased intracranial compliance. However, ketamine administration does not increase ICP in neurologically impaired patients under controlled ventilation with concomitant administration of propofol or a benzodiazepine. Additionally, ket-amine may offer neuroprotective effects, according to some investigations. Ketamine’s blockade of the N-methyl-d-aspartate (NMDA) receptor duringperiods of increased glutamate concentrations, as occurs during brain injury, may be protective against neuronal cell death (Figure26–8). 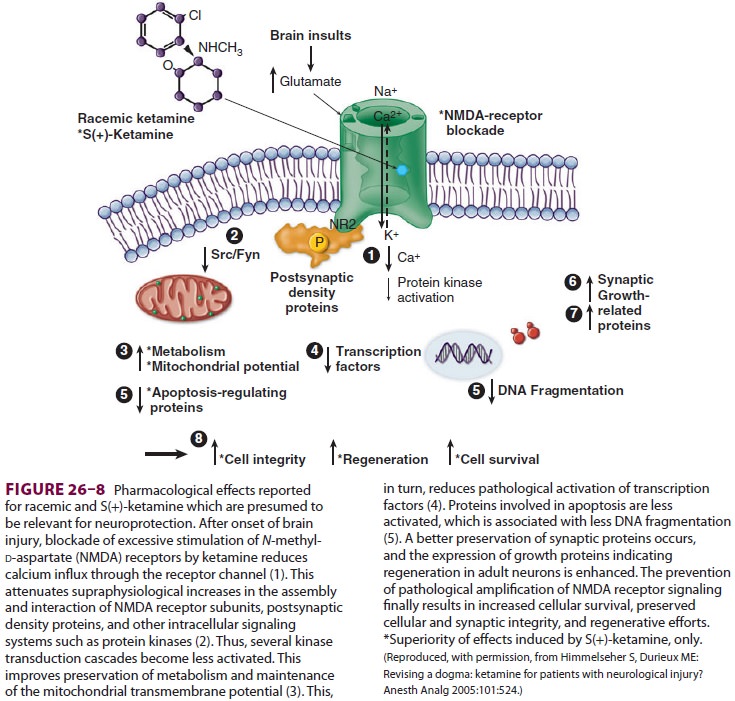 Intravenous lidocaine decreases CMR, CBF, and ICP, but to a lesser degree than other agents. Its prin-cipal advantage is that it decreases CBF (by increas-ing cerebral vascular resistance) without causing other significant hemodynamic effects. Lidocaine may also have neuroprotective effects. Lidocaine infusions are used in some centers as a supplement to general anesthesia to reduce emergence delirium and the requirement for opioids.

Droperidol has little or no effect on CMR and minimally reduces CBF. When used in larger doses with an opioid as part of a neuroleptic technique, droperidol may sometimes cause undesirable pro-longed sedation. Droperidol and narcotics were once mainstays of neuroanesthesia. Droperidol’s prolongation of the QT interval and risk of fatal arrhythmia, as well as official warnings related to the drug, have retarded its use.

With normal autoregulation and an intact blood–brain barrier, vasopressors increase CBF only when mean arterial blood pressure is below 50–60 mm Hg or above 150–160 mm Hg. In the absence of autoregulation, vasopressors increase CBF by their effect on CPP. Changes in CMR gen-erally parallel those in blood flow. β-Adrenergic agents seem to have a greater effect on the brain when the blood–brain barrier is disrupted; central β1-receptor stimulation increases CMR and blood flow. β-Adrenergic blockers generally have no direct effect on CMR or CBF, whereas α2-adrenergic ago-nists produce cerebral vasoconstriction. Excessive elevations in blood pressure with any agent can dis-rupt the blood–brain barrier.

In the absence of hypotension, most vasodilators induce cerebral vasodilation and increase CBF in a dose-related fashion. When these agents decrease blood pressure, CBF is usually maintained and may even increase. The resultant increase in cere-bral blood volume can significantly elevate ICP in patients with decreased intracranial compliance. Of this group of drugs, only the ganglionic blocker trimethaphan has little or no effect on CBF and cerebral blood volume. Trimethaphan is no longer available in the United States.

Neuromuscular blockers (NMBs) lack direct action on the brain but can have important secondary effects. Hypertension and histamine-mediated cere-bral vasodilation increase ICP, whereas systemic hypotension (from histamine release or ganglionic blockade) lowers CPP. Succinylcholine can increase ICP, possibly as a result of cerebral activation associ-ated with enhanced muscle spindle activity, but the increase is generally minimal and clinically unim-portant, if an adequate dose of propofol is given and hyperventilation is initiated at induction. Moreover, a small (defasciculating) dose of a nondepolarizing NMB seems to blunt the increase, at least partially. In the majority of instances, increases in ICP fol-lowing administration of an NMB are the result of a hypertensive response due to light anesthesia dur-ing laryngoscopy and tracheal intubation. Acute elevations in ICP will also be seen, if hypercapnia or hypoxemia results from prolonged apnea.