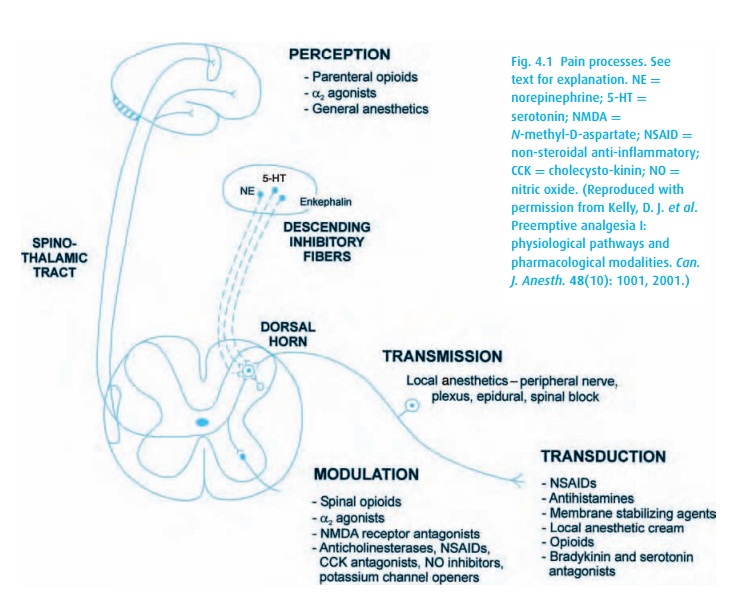 We can imagine future clinicians to prescribe treatments that would exclusively affect a single cell type or a specific organ without spillover effects.

We can imagine future clinicians to prescribe treatments that would exclusively affect a single cell type or a specific organ without spillover effects. That type of explicit therapy would be the opposite to general anesthesia, the name of which implies generalized effects of the anesthetic drugs. Indeed, anesthetics delivered via the lungs or by intravenous injection flood all organs in the body, causing numerous undesired effects. How much better to pinpoint the effect with regional anesthesia. Here, we deliver the drug directly to the nervous tissue where we hope to cause a specific effect. We are closer to the ideal but not quite in heaven because we still have to contend with side effects that arise when the anesthetic drug appears in the circulation. We also lack the specificity of drugs that would block only one type of fiber and spare all others. Nevertheless, regional anesthesia provides a tool that can be used to great advantage for many patients. 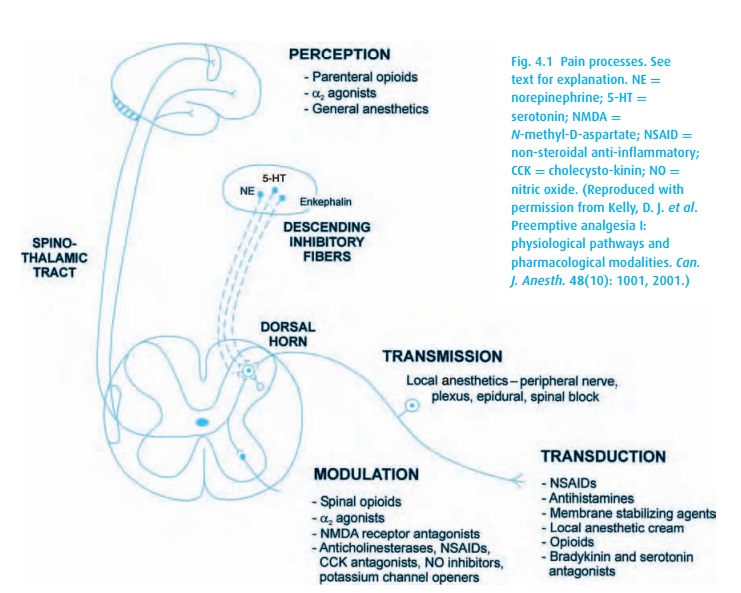 Four distinct processes lead to the sensation of pain (Fig. 4.1):

·           Transduction Noxious stimulation of a peripheral receptor releases localinflammatory mediators that cause changes in the activity and sensitivity of sensory neurons. Pre-incisional infiltration of local anesthetics effectively blocks transduction.

·           Transmission Once the noxious stimulus has been transduced, the impulsestravel via A-delta and C fibers to the dorsal horn of the spinal column where they synapse. The dorsal horn cells may be subject to “wind-up” or enhanced excitability and sensitization. Transmission can be blocked with regional anesthesia.

·           Perception Afferent fibers from the dorsal horn travel to higher CNS cen-ters, mostly via the spinothalamic tracts. Activation of the reticular forma-tion probably increases arousal and contributes the emotional component of pain. Central-acting agents such as opioids alter perception.

The complexity of pain perception goes beyond this quick anatomic/physiologic summary. Strong emotional stimuli and distraction can completely block pain perception, as is often true for injuries sustained in battle (or when being eaten by a lion). Thus, in addition to the described processes of getting the signal from injured tissue to the brain, psychological factors modulate the pain experience.

While we can interfere with the impulses traveling up the nervous pathways at any stage, mounting evidence suggests that multi-modal and pre-emptive (before incision) therapy can both improve immediate post-operative pain control and reduce the risk of a subsequent chronic pain syndrome.

Transduction of superficial noxious stimuli can be inhibited with pre-incisional local infiltration. As the name implies, regional anesthesia involves anesthetiz-ing a specific portion of the body, thereby preventing transmission. Because pain sensation travels via nerves (A-delta and C fibers to be specific) from the site of the injury to the spinal cord (dorsal columns) and then up to the brain, the nerve impulse can be interrupted at numerous sites. Consider an operation on the big toe. Local anesthetic infiltration suffices for only the most superficial of procedures. For anything deeper, we make use of our knowledge of the area’s innervation and the anatomic course of the nerves through the body. Sensory impulses can be interrupted in several locations including the ankle, popliteal fossa, sciatic notch, or at the spinal cord level. The first three would be considered peripheral nerve blocks because they block the transmission of the “pain mes-sage” before it reaches the central nervous system. We can also block the message at the level of the central nervous system with an epidural anesthetic (which could be a caudal block), or a spinal (properly called a subarachnoid) block. Together, these last approaches are called neuraxial anesthesia. And all can be effective for big toe surgery.

When used for operative anesthesia, we typically supplement a regional block with sedation; the patient need not be aware during the procedure. A balance must be struck between the patient’s comfort, and the side effects of sedation, primarily respiratory depression. Also, all our sedatives, even midazolam (Versed®), linger and produce a hangover effect. Therefore, the patient will not be fully functional following the procedure, or even for the remainder of the day. Some patients do not like this feeling and would prefer the reassuring conversation of a caring anesthesiologist over drug-induced anxiolysis.

We may be tempted to choose regional anesthesia for patients with cardio-vascular or pulmonary problems, arguing that a properly conducted regional technique stresses these systems less than does a general anesthetic. Be careful! If the regional block is unsuccessful, if there are complications, or if the block wears off during the operation, the patient may require emergency general anesthe-sia and possibly also tracheal intubation. Similarly, regional anesthesia must be used with caution in patients with a recognized “difficult airway.” If we fear diffi-culty managing the patient’s airway, we would be ill-advised to perform a regional anesthetic to “avoid the airway” without adequate preparation (additional airway equipment, etc.).