Human deoxyribonuclease I (DNase I) is an endonu-clease that catalyzes the hydrolysis of extracellular DNA. It is the most extensively studied member of a family of DNase I-like nucleases (Lazarus, 2002; Baranovskii et al., 2004; Shiokawa and Tanuma, 2001); the homologous bovine DNase I has received even greater attention historically (Laskowski, 1971; Moore, 1981; Chen and Liao, 2006). Mammalian DNases have been broadly divided into several families initially based upon their products, pH optima and divalent metal ion requirements. These include the neutral DNase I family (EC 3.1.21.1), the acidic DNase II family (EC 3.1.22.1), as well as apoptotic nucleases such as DFF40/CAD and endonuclease G (Lazarus, 2002; Evans and Aguilera, 2003; Widlak and Garrard, 2005). The human DNase I gene resides on chromosome 16p13.3 and contains 10 exons and 9 introns, which span 15 kb of genomic DNA (Kominato et al. 2006). DNase I is synthesized as a precursor and contains a 22-residue signal sequence that is cleaved upon secretion, resulting in the 260-residue mature enzyme. It is secreted by the pancreas and parotid glands, consistent with itsproposed primary role of digesting nucleic acids in the gastrointestinal tract. However it is also present in blood and urine as well as other tissues, suggesting additional functions.

Recombinant human DNase I (rhDNase I, rhDNase, Pulmozyme dornase alfa) has been devel-oped clinically where it is aerosolized into the airways for treatment of pulmonary disease in patients with cystic fibrosis (CF) (Suri, 2005). CF is an autosomal recessive disease caused by mutations in the cystic fibrosis transmembrane conductance regulator (CFTR) gene (Kerem et al., 1989; Riordan et al., 1989). Mutations of this gene result in both abnormal quantity and function of an apical membrane protein responsible for chloride ion transfer. The CFTR protein is a member of the ATP-binding cassette transporter superfamily (member ABCC7) and in addition to transporting chloride has many other functions including the regulation of epithelial so-dium channels, ATP-release mechanisms, anion ex-changers, sodium bicarbonate transporters, and aquaporin water channels found in airways, intestine, pancreas, sweat duct and other fluid-transporting tissues (Guggino and Stanton, 2006). Clinical mani-festations of the disease include chronic obstructive airway disease, increased sweat electrolyte excretion, male infertility due to obstruction of the vas deferens, and exocrine pancreatic insufficiency. In the airways, abnormal CFTR is associated with formation of dehydrated, viscous mucus that results in obstruc-tions. These obstructed airways become chronically infected with bacteria, which then leads to chronic, excessive neutrophilic airway inflammation. Necrosis of neutrophils results in airway damage and further obstruction from release of cell constituents precipi-tating a progressive downward spiral of lung damage and loss of lung function, ultimately resulting in premature death (Fig. 1). 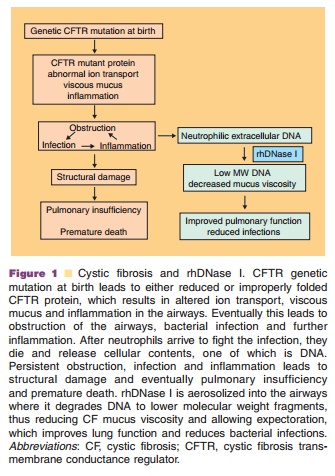 The use of rhDNase I has been investigated in other diseases where exogenous DNA has been implicated pathologically, although it is only ap-proved for use in CF. rhDNase I has been studied in systemic lupus erythematosus (SLE), where degrada-tion or prevention of immune complexes containing anti-DNA antigens may have therapeutic benefit (Davis et al., 1999). rhDNase I has also been studied in a variety of other diseases where extracellular DNA has been postulated to play a pathological role, including mechanical ventilation (Riethmueller et al., 2006), atelectasis (Hendriks et al., 2005), chronic sinusitis (Cimmino et al., 2005) and empyema (Simpson et al., 2003).

Macromolecules that contribute to the physical proper-ties of lung secretions include mucus glycoproteins, filamentous actin and DNA. Experiments in the 1950s and 1960s revealed that DNA is present in very high concentrations (3–14 mg/mL) only in infected lung secretions (Matthews et al., 1963). This implied that the DNA that contributes to the high viscoelastic nature of CF sputum is derived from neutrophils responding to chronic infections (Potter et al., 1969). These DNA-rich secretions also bind aminoglycoside antibiotics com-monly used for treatment of pulmonary infections and thus may reduce their efficacy (Ramphal et al., 1988; Batallion et al., 1992).

Early in vitro studies in which lung secretions were incubated for several hours with partially purified bovine pancreatic DNase I showed a large reduction in viscosity (Armstrong and White, 1950; Chernick et al., 1961). Based on these observations, bovine pancreatic DNase I (Dornavac or Pancreatic Dornase) was approved in the United States for human use in 1958. Numerous uncontrolled clinical studies in patients with pneumonia and one study in patients with CF suggested that bovine pancreatic DNase I was effective in reducing the viscosity of lung secretions (Lieberman, 1968). However, severe ad-verse reactions occurred occasionally, perhaps due to allergic reactions to a foreign protein or from contaminating proteases, since up to 2% trypsin and chymotrypsin were present in the final product (Raskin, 1968; Lieberman, 1962). Both bovine DNase I products were eventually withdrawn from the market.

In the late 1980s human deoxyribonuclease I was cloned from a human pancreatic cDNA library, sequenced and expressed recombinantly using mam-malian cell culture in Chinese hamster ovary (CHO) cells to re-evaluate the potential of DNase I as a therapeutic for CF (Shak et al., 1990). In vitro incuba-tion of purulent sputum from CF patients with catalytic concentrations of rhDNase I reduced its viscoelasticity (Shak et al., 1990). The reduction in viscoelasticity was directly related to both rhDNase I concentration and to reduction in the size of the DNA in the samples. Therefore, reduction of high molecular weight DNA into smaller fragments by treatment with aerosolized rhDNase I was proposed as a mechanism to reduce the mucus viscosity and improve mucus clearability from obstructed airways in patients. It was hoped that improved clearance of the purulent mucus would enhance pulmonary function and reduce recurrent exacerbations of respiratory symptoms requiring parenteral antibiotics. This proved to be the case and rhDNase I was approved by the Food and Drug Administration in 1993.