In vitro, rhDNase I hydrolyzes the DNA in sputum of CF patients and reduces sputum viscoelasticity.

In Vitro Activity in CF Sputum

In vitro, rhDNase I hydrolyzes the DNA in sputum of CF patients and reduces sputum viscoelasticity (Shak et al., 1990). Effects of rhDNase I were initially examined using a relatively crude “pourability” assay. Pourability was assessed qualitatively by inverting the tubes and observing the movement of sputum after a tap on the side of the tube. Catalytic amounts of rhDNase I (50 µg/mL) greatly reduced the viscosity of the sputum, rapidly transforming it from a viscous gel to a flowing liquid. More than 50% of the sputum moved down the tube within 15 minutes of incuba-tion, and all the sputum moved freely down the tube within 30 minutes. The qualitative results of the pourability assay were confirmed by quantitativemeasurement of viscosity using a Brookfield Cone-Plate viscometer (Fig. 4). The reduction of viscosity by rhDNase I is rhDNase I concentration-dependent and is associated with reduction in size of sputum DNA as measured by agarose gel electrophoresis (Fig. 5). 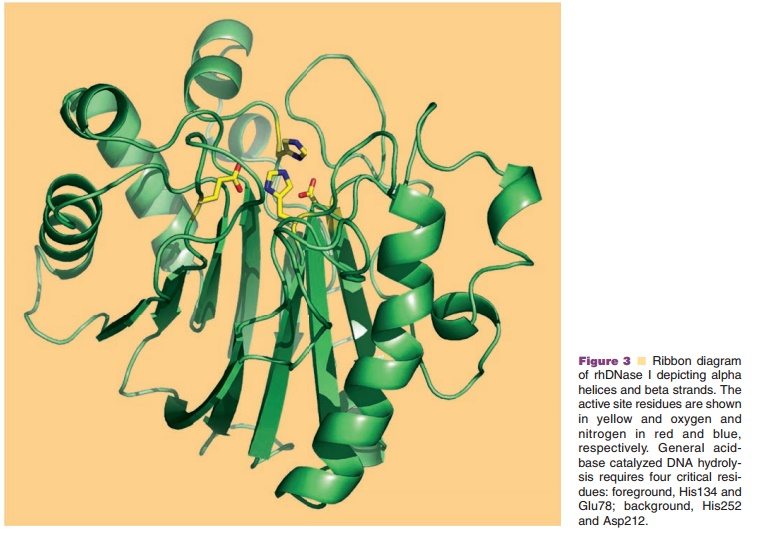 Additional in vitro studies of CF mucus samples treated with rhDNase I demonstrated a dose-depen-dent improvement in cough transport and mucocili-ary transport of CF mucus using a frog palate model and a reduction in adhesiveness as measured by mucus contact angle (Zahm et al., 1995). The improvements in mucus transport properties and adhesiveness were associated with a decrease in mucus viscosity and mucus surface tension, suggest-ing rhDNase I treatment may improve the clearance of mucus from airways. The in vitro viscoelastic proper-ties of rhDNase I have also been studied in combina-tion with normal saline, 3% hypertonic saline or Nacystelyn, the L-lysine salt of N-acetyl cysteine (King et al., 1997; Dasgupta and King, 1996). The major impact of rhDNase I on CF sputum is to decrease spinnability, which is the thread forming ability of mucus under the influence of low amplitude stretching. CF sputum spinnability decreases 25% after 30 minutes incubation with rhDNase I (King et al., 1997). rhDNase I in normal saline and saline alone both increased the cough clearability index. With the combination of rhDNase I and 3% hypertonic saline, there was minimal effect on spinnability, however, mucus rigidity and cough clearability improved greater than with either agent alone. The predicted mucociliary clearance did not significantly increase with 3% saline either alone or in combination with rhDNase I. Combining rhDNase I with Nacystelyn has an additive benefit on spinnability, but no effect on mucus rigidity or cough clearability (Dasgupta and King, 1996). These effects of rhDNase I can be variable in vivo and do not necessarily correlate with the level of DNA in sputum. For example, sputum from CF patients that clinically responded to rhDNase I contains significantly higher levels of magnesium ions compared with sputum from patients who do not have a clear response (Sanders et al., 2006). Although this response is consistent with the requirement for divalent cations and their mode of action on DNase I (Campbell and Jackson, 1980), the mechanism of increased rhDNase I activity by magnesium ions has been attributed to altering the polymerization state of actin such that equilibrium favors increased F-actin and decreased G-actin (see below).

The mechanism of action of rhDNase I to reduce CF sputum viscosity has been ascribed to DNA hydrolysis (Shak et al., 1990). However, an alternative mechanism involving depolymerization of filamen-tous actin (F-actin) has been suggested since F-actin contributes to the viscoelastic properties of CF sputum and the actin-depolymerizing protein gelsolin also reduces sputum viscoelasticity (Vasconcellos et al., 1994). F-actin is in equilibrium with its monomeric form (G-actin), which binds to rhDNase I with high affinity and is also a potent inhibitor of DNase I activity (Lazarides and Lindberg, 1974). DNase I is known to depolymerize F-actin by binding to G-actin with high affinity, shifting the equilibrium in favor of rhDNase I/G-actin complexes (Hitchcock et al., 1976). To elucidate the mechanism of rhDNase I in CF sputum, the activity of two types of rhDNase I variants were compared in CF sputum (Ulmer et al., 1996). Active site variants were engineered that were unable to catalyze DNA hydrolysis but retained wildtype G-actin binding. Actin-resistant variants that no longer bound G-actin but retained wildtype DNA hydrolytic activity were also characterized. The active site variants did not degrade DNA in CF sputum and did not decrease sputum viscoelasticity (Fig. 6). Since the active site variants retained the ability to bind G-actin these results argue against depolymerization of F-actin as the mechanism of action. In contrast, the actin-resistant variants were more potent than wild-type DNase I in their ability to degrade DNA and reduce sputum viscoelasticity (Fig. 6). The increased potency of the actin-resistant variants indicated that G-actin was a significant inhibitor of wildtype DNase I in CF sputum and confirmed that hydrolysis of DNA was the mechanism by which rhDNase I decreases sputum viscoelasticity. The mechanism for reduction of sputum viscosity by gelsolin was subsequently determined to result from an unexpected second binding site on actin that competes with DNase I, thus relieving the inhibition by G-actin (Davoodian et al., 1997). Additional in vitro studies characterizing the relative potency of actin-resistant and hyperactive rhDNase I variants in serum and CF sputum have been reported (Pan et al., 1998b).