The simplest arrangement of points and crossing can be found on a turnout taking off from a straight track. There are two standard methods prevalent for designing a turnout. These are the (a) Coles method and the (b) IRS method.

The simplest arrangement of points and crossing can be found on a turnout taking off from a straight track. There are two standard methods prevalent for designing a turnout. These are the (a) Coles method and the (b) IRS method.

These methods are described in detail in the following sections.

The important terms used in describing the design of turnouts are defined as follows.

Curve lead (CL) This is the distance from the tangent point (T) to the theoretical nose of crossing (TNC) measured along the length of the main track.

Switch lead (SL) This is the distance from the tangent point (T) to the heel of the switch (TL) measured along the length of the main track.

Lead of crossing (L) This is the distance measured along the length of the main track as follows:

Gauge (G) This is the gauge of the track.

Heel divergence (D) This is the distance between the main line and the turnout side at the heel.

As the radius of a curve is quite large, for practical purposes, R may be taken to be equal to R1.

Some of the special fittings required for use with turnouts are enumerated below.

Spherical washers These are special types of washers and consist of two pieces with a spherical point of contact between them. This permits the two surfaces to lie at any angle to each other. These washers are used for connecting two surfaces that are not parallel to one another. Normally, tapered washers are necessary for connecting such surfaces. Spherical washers can adjust to the uneven bearings of the head or nut of a bolt and so are used on all bolts in the heel and the distance blocks behind the heel on the left-hand side of the track.

Slide chairs These are provided under tongue rails to allow them to move laterally. These are different for ordinary switches and overriding switches.

Grade off chairs These are special chairs provided behind the heel of the switches to give a suitable ramp to the tongue rail, which is raised by 6 mm at the heel.

Gauge tie plates These are provided over the sleepers directly under the toe of the switches, and under the nose of the crossing to ensure proper gauge at these locations.

Stretcher bars These are provided to maintain the two tongue rails at an exact distance.

This is a method used for designing a turnout taking off from a straight track (Fig. 14.11). The curvature begins from a point on the straight main track ahead of the toe of the switch at the theoretical toe of switch (TTS) and ends at the theoretical nose of crossing (TNC). The heel of the switch is located at the point where the offset of the curve is equal to the heel divergence. Theoretically, there would be no kinks in this layout, had the tongue rail been curved as also the wing rail up to the TNC. Since tongue rails and wing rails are not curved generally, there are the following three kinks in this layout. 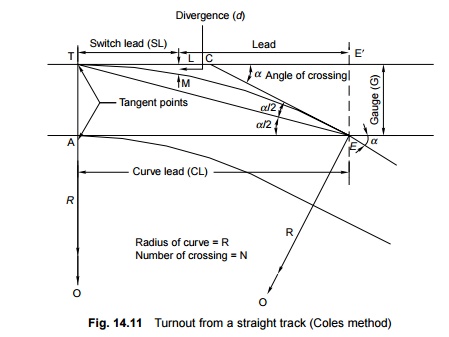 (a) The first kink is formed at the actual toe of the switch.

(b) The second kink is formed at the heel of the switch.

(c)  The third kink is formed at the first distance block of the crossing. The notations used in Fig. 14.11 are the following.

Number of the crossing (N) = cota 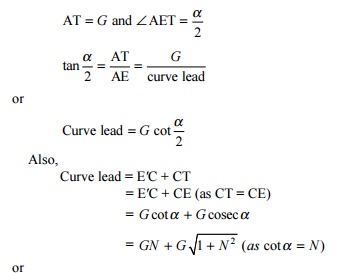 Switch lead (SL) TL is the length of the tangent with an offset LM = D = heel divergence. 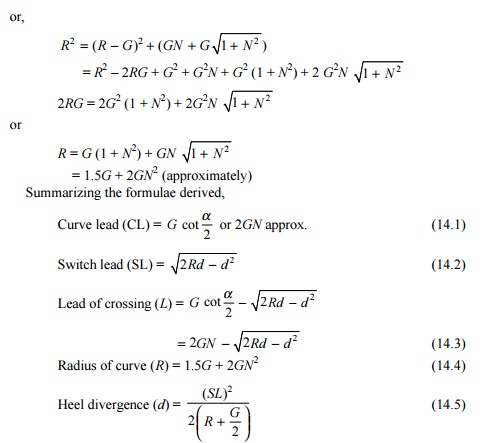 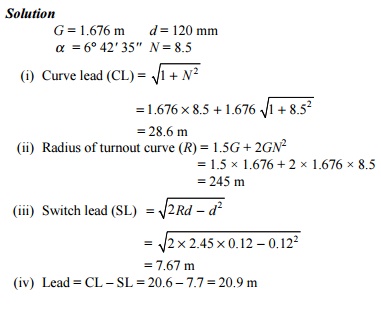 In this layout (Fig. 14.12), the curve begins from the heel of the switch and ends at the toe of the crossing, which is at the centre of the first distance block. The crossing is straight and no kink is experienced at this point. The only kink occurs at the toe of the switch. This is the standard layout used on Indian Railways. The calculations involved in this method are somewhat complicated and hence this method is used only when precision is required. 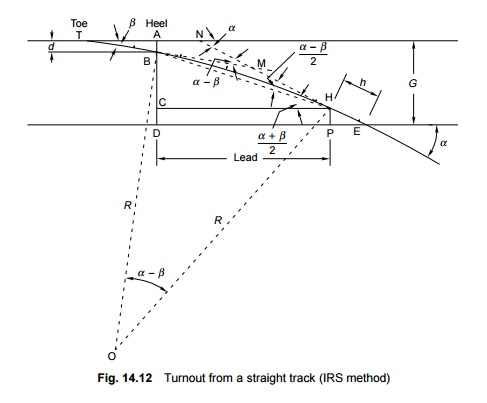 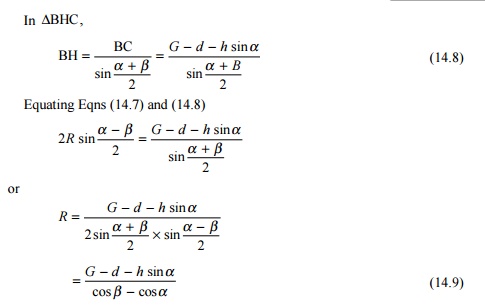 Example 14.2 Calculate the lead and radius of a 1 in 8.5 BG turnout with straight switches. Use the IRS method. 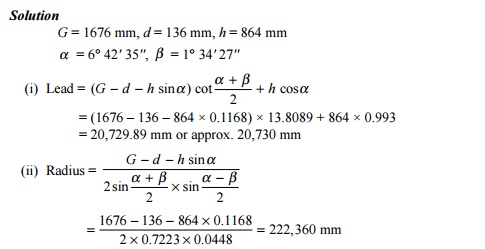 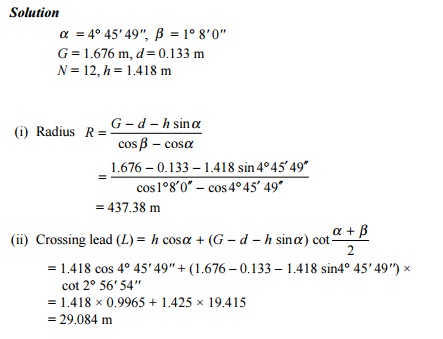 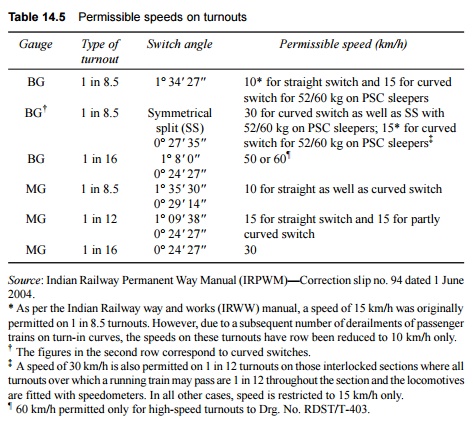 * As per the Indian Railway way and works (IRWW) manual, a speed of 15 km/h was originally permitted on 1 in 8.5 turnouts. However, due to a subsequent number of derailments of passenger trains on turn-in curves, the speeds on these turnouts have row been reduced to 10 km/h only.

†  The figures in the second row correspond to curved switches.

‡ A speed of 30 km/h is also permitted on 1 in 12 turnouts on those interlocked sections where all turnouts over which a running train may pass are 1 in 12 throughout the section and the locomotives are fitted with speedometers. In all other cases, speed is restricted to 15 km/h only.

where R is the radius of the outer lead rail, G is the gauge, h is the lead of the straight leg of the crossing ahead of TNC up to the TP of the lead curve, t is the thickness of the switch at the toe, I is the distance from the toe of the switch to the point where the tangent drawn to the extended lead curve is parallel to the main line gauge face, V is the distance between the main line gauge face and the tangent drawn to the lead curve from a distance l from the toe, y is the vertical ordinate along the Y-axis, a is the crossing angle, and b is the switch angle. 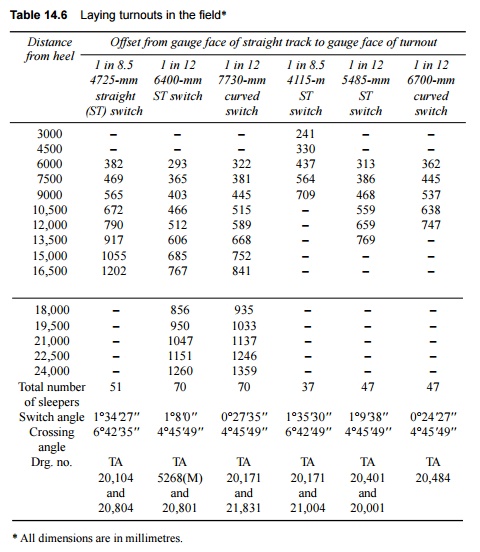