The race is a group of people with more or less permanent distinguishing characteristics.

The race is a group of people with more or less permanent distinguishing characteristics. There are skin colour and hair colour to which persons concerned attach certain interpretations. Objectives and s cientific classification are the division of mankind in toracial groups should be done on the basis of measurable physical features and qualities inherited from a common ancestor. The important features on the basis of which the races are identified and classified include skin colour, stature, shape of head, face, nose, eye, type of hair, and blood group. Human races are classified in to four broad groups:

If human being originated from one point, Africa and spread to rest of the world, how could they become different races?

They are usually called as "black race". They have the darkest skin tone than other races, and other common characteristics are the slopped forehead, thick lips, wide nose, and dark hairs. They are living in Sub-Sahara Africa.

They have the folding eye lids, almond shaped eyes, yellowish skin tone, and V shaped cheeks. Native Americans and Eskimo are also classified as Mongoloid. Compared to the other races, they have the least body hair, least body odour, and smallest limb ratio. Their facial structure is likely to adapt cold mild wind. They are living in East Asia. 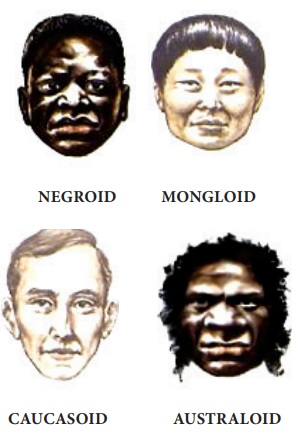 The Caucasoid is known as "white people" characterised by the pointy nose, vertical forehead, pinkish/orange skin tone, visible brow ridge, and colourful eyes/hair. Some believe that their light skin tone is meant to receive more sunlight due to Europe's climate. Some believe that their nose structure is meant to keep the nose moisture from getting dried by the wind.

They are living in Europe and Middle East.

They have visible eye ridge, wide nose, curly hair, dark skin tone, and short in height. Some believe that their visible thick lips helps them to eat stiff foods. They are living in Australia and Papua New Guinea. 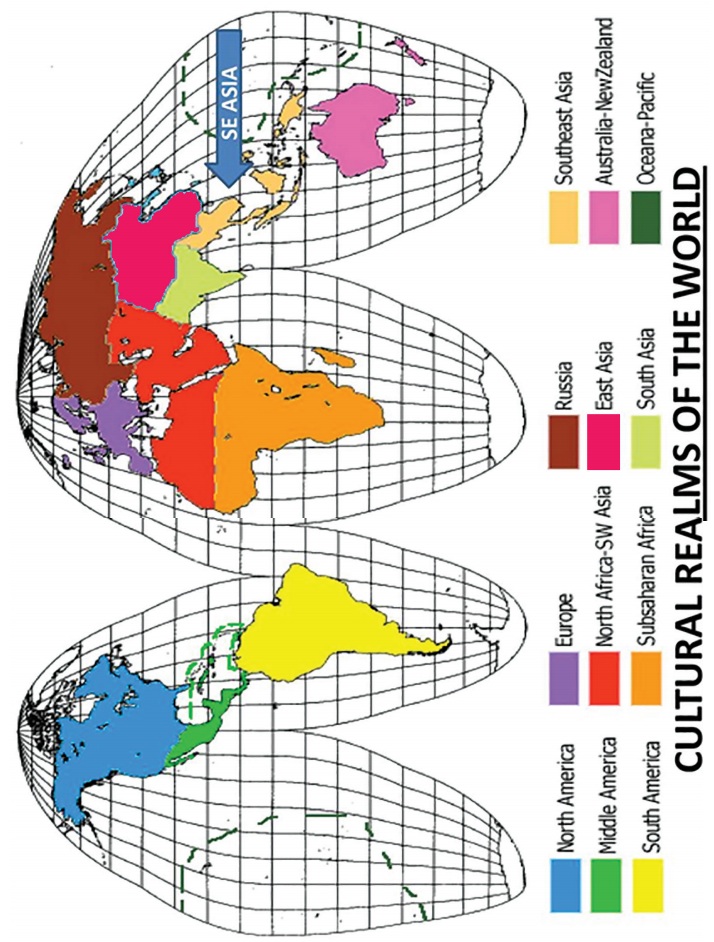 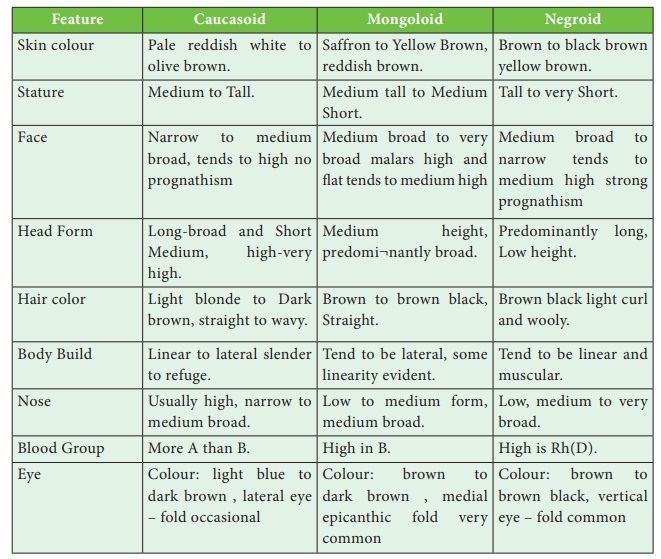 Ethnicity is a concept referring to a shared culture and a way of life. This can be reflected in language, religion, material culture such as clothing and cuisine, and cultural products such as music and art. Ethnicity is often a major source of social cohesion and social conflict. The world is home to thousands of different ethnic groups, from the Han Chinese (the largest ethnic group in the world) to the smallest indigenous groups, some of which include only a few dozen people. Almost all of these groups possess a shared history, language, religion, and culture, which provide group members with a common identity.

India is a unique country with great diversity in ethnicities, race, religion, language, culture, cuisine and in every other aspect of the human society. Indian civilization is one of the oldest in the world and primarily consists of the Indo-Aryans of North India and the Dravidians of South India, the people of the Indus Valley Civilization while the former migrated to the country at about 1800 BC. As India has such a diverse cultural demographic, it makes sense that the country is also.

The ancient Indus Valley civilization in India was believed to have been of Dravidian origin in northern India, but then the Dravidian people were pushed south when the Indo-Aryans came in and the Kuru Kingdom in northern Indian arose. Later South India was dominated by the three Dravidian kingdoms of the Cheras, Cholas, and the Pandyas. These three kingdoms have been shown to sponsor the growth of literature, music, and the arts and to have done extensive trading. The three kingdoms also supported and were tolerant of Buddhism, Jainism, and Hinduism. The major languages spoken by the Dravidian people are Tamil, Telugu, Kannada, Malayalam, and Brahui.

Religion is not a vague fear or unknown powers not the child of terror, but rather a relation of all the members of a community to a power that has the good of the community at heart and protects its law and moral order. Religion produces a distinct attitude towards life which affects the further development of the society. Indeed most cultural situations show the mutual interaction between religion and socio-economic and politico-cultural factors.

Major religions of the world

Major religions of the world are classified based on the followers. They are Christianity, Islam, Hinduism, Buddhism, and Judaism. Other important religions include Chinese folk religions, Sikhism, Confucianism, Shintoism etc,.

Christianity is a universal religion which has the largest number of followers in the world. They are spread in Europe, Anglo America, Latin America, Africa, Asia and Oceania. Its sacred book is “Bible”. Islam is the second largest religion of the world. The largest concentration of the Islam is in the South West Asia, Central Asia, South Asia and South East Asia Followed by the North Africa. Shia and Sunni are its two main sects. Its sacred book is Kuran.

Hinduism is the oldest ethnic religion of the world which was founded about 3000 B.C (B.C.E) in India. Today it has over 8 million followers in the world but main concentration is in India and Nepal. Nearly 99 percent of the total Hindu population is concentrated in south Asia. Its sacred book is Bhagavad Gita. Buddhism is also one of the oldest religions of India which was founded by Lord Buddha around 525 B.C (B.C.E). Its spread in several Asian countries (China, Myanmar, India, Srilanka, japan, Mangolia, korea and South East Asian countries) due to its liberal philosophy. Its two main sects are Hinayana and Mahayana.

Judaism is the oldest Monotheistic faith which is regarded as the parent of Christianity. It originates 4000 years ago in the Middle East. At present it has about 14 million followers living in U.S.A, Europe and Asia. Chinese religions include two main beliefs called Confucianism and tao-ism. Confucianism was established by Confucious (551-479 B.C (BCE)). Taoism was established by Lao Tse (604-517 B.C (BCE)).

Jainism is also born in India as a reaction to orthodox Hinduism. It was founded by Lord Mahavir who was a Contemporary of Lord Buddha. Its followers are mostly concentrated in India. It is an offshoot of Hinduism which was established in the 15th century by Guru Nanak. It remained confined to Punjab state and has accepted Gurumukhi as its language.

Tribal religions are the special forms of ethnic religion. The tribal people are generally in the Neolithic stage of social development. Tribal people are strikingly different and diverse in their culture, social and economic life. They cherish their own distinct and have maintained a close relationship to the land and natural environment. Most of them live according to their traditions and are engaged in food gathering, hunting, fishing, primitive agriculture etc, there are about 300 million indigenous people worldwide, constituting about four percent of the total population of the world living in more than sixty countries.