The study of the way a country’s size, position, etc, influence its power and its relationships with other countries.

The study of the way a country’s size, position, etc, influence its power and its relationships with other countries. Political activity is influenced by the physical features of a country or area of the world. Geo politics is concerned with how geographical factors including territory, population, strategic location, and natural resources endowments as modified by economics and technology affect the relations between states and the struggle forward domination. It is battle between land power and sea power which is going to lead the world continents by one.

1) The Heartland - area of interior and Arctic drainage in the Eastern Europe, covered by mountains on three sides and Arctic in north. This is a natural fortress on earth, inaccessible to sea powers.

2) The Inner or Marginal Crescent - area of Europe and Asia adjoining the Heartland and Africa, north of Sahara.

3) The Outer or Insular Crescent - It includes North and South America, Africa (south of Sahara) and Australia. Besides, it also includes the Great Britain and Japan because of their insularity from Eurasia.

According to Mackinder, one with control over Heartland will be in an unstoppable position to rule the world. Heartland, with its agricultural and industrial resources would conquer the inner crescent and Outer crescent would follow later. He conceptualized his theory as:

Mackinder later argued that key to control Heartland lays in Eastern Europe, reflecting a powerful strand of pre and post- Versailles geographical thinking concerning the news to separate the powerful states of Germany and Russia by the creation of ‘buffer states'.

Influence - His theory was put to test during the World War II when the Heartland could become the power centre of the world if either Germany unites with Russia or China or Japan thrashes Russia. But the shattering defeat of Germany turned Heartland into a power vacuum.

The area highlighted in red is the heartland, blue is rim land and the encircled area is the world island.

The heartland is inaccessible from top because North Sea, Norwegian Sea, Barents Sea, Kara Sea, Laptev Sea, East Siberian Sea are all frozen throughout the year. The hearland is inaccesible from the bottom because of Middle Eastern desert, Iranian Plateau, Himalayas, Plateau’s of Tibet and Siberian mountains. This makes heartland immune to any conquests from any other side than Eastern Europe. 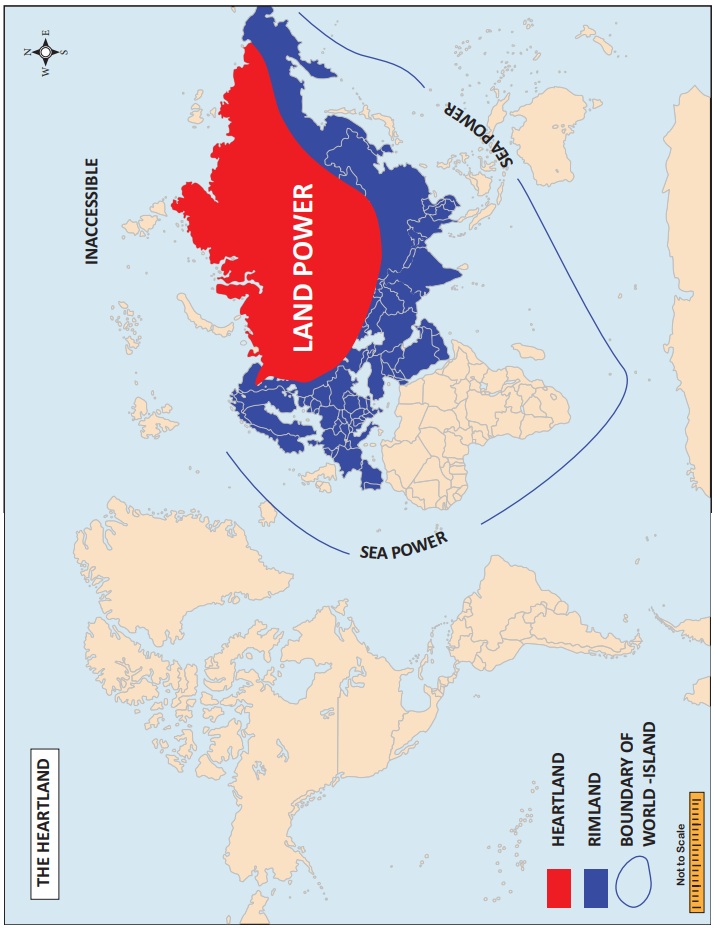 The only gateway to the heartland is through Eastern Europe. So, protecting one gateway would be far easier than protecting the whole land. Moreover, the heartland was self sufficient with most of the resources and wasn’t dependent on trade from outside world.

So, Mackinder believed that the one who controls the heartland would be able to control the Rimland and as a result the world-Island, and the one, who rules the world Island, would rule the world. Although this theory made sense at that time (1904), when there was no significant aviation and naval power, it does not make much sense now.