1. The subject which deals with map making process is _____.

2. A map that shows the physical features of an area is called ____.

4. The maps which are known as plans are.

5. Actual distribution of population can be represented by _____ .

1. The globe is the true representation of the Earth.

2. A way of representing the spherical earth on a flat surface is map projection.

3. A line that joins the points of equal elevation is lsoline.

5. Thematic map is focused on a specific theme.

III Choose the option which matches the following correctly

Reason : Due to lack of space ,it shows large areas like Continents and countries.

a. Statement is true but reason is wrong.

b. Statement is wrong and reason is correct.

c. Both the statement and reasons are correct.

d. Both the statement and reasons are wrong.

[Answer: (c) Both the statement and reasons are correct]

2. Statement : The conventional signs and symbols are the keys of map reading.

Reason : These symbols give a lots of information in a limited area.

a. Both the statement and reasons are correct.

b. Statement is wrong and reason is correct.

c. Statement is true but reason is wrong.

d. Both the statement and reasons are wrong.

[Answer: (a) Both the statement and reasons are correct]

V Answer the following in one or two sentences

(i) Map scale refers to the relationship (or ratio) between distance on a map and the corresponding distance on the ground.

Answer: The map that shows the physical features of an area is usually called a Physical Map or a Relief Map.

Answer: A map projection is a way of representing the spherical earth on a flat surface of a map. The curved surface of the earth cannot be shown accurately on a map. So, cartographers use map projections while mapping the earth surface which would-help them to reduce distortions.

5. What are the uses of a cadastral map?

Answer: Cadastral maps are useful for local administration such as the city survey, taxation, management of estates and to define property in legal documents.

a) The map that shows the physical features of an area is usually called a Physical Map or a Relief Map.

b) Their primary purpose is to show landforms like deserts, rivers, mountains, plains, plateaus etc.

a) A thematic map is a map that focuses on a specific theme or subject area.

b) They show the subject such as physical phenomena like temperature variation, rainfall distribution and population density in an area.

a) The Large scale maps portray the information in detail than the small scale maps.

b) For example physical map of India represents a small area of the earth but gives us more information.

a) Small scale maps can show only major features omitting the minor ones due to lack of space.

b) For example physical map of the world will show us only the major physical features in the world.

a) Globe gives a three dimensional representation of the entire world..

a) Map gives a two dimensional representation of certain regions or the entire world.

b) It is a visual representation of an entire or a part of an area typically represented on a flat surface.

VII Answer in a paragraph

1. Explain the different types of scales in detail.

Answer: Scales on maps can be represented in three different ways. They are:

(a) Statement or Verbal scale

(a) Statement or Verbal scale:

b) Representative Fraction (RF) or Numerical Fraction or Ratio Scale:

(i) It shows the relationship between the map distance and the corresponding ground distance in the same units of length.

(ii) R.F. is generally shown as a fraction.

(i) A graphic scale looks like a small ruler drawn at the bottom of the page.

(ii) This line is line is divided and sub divided into lengths each of which represents a certain distance on the ground.

(iii) This scale has added advantage for taking copies of maps as the measurement does not change.

2. Describe the Cadastral map and its importance.

(i) Cadastral map refers to a map that shows the boundaries and ownership of land within a specified area. ,

(ii) These maps are sometimes known as plans.

(iii) They are useful for local administration such as the city survey, taxation, management of estates.

(iv) They are used to define property in legal documents

(v) They are maintained by the government and they are a matter of public record.

(i) Cadastral surveys document the boundaries of land ownership, by the production of documents, diagrams, sketches, plans, charts and maps.

(ii) They were originally used to ensure reliable facts for land valuation and taxation.

3. Write a paragraph about the conventional signs and symbols.

(i) Conventional signs are symbols used in maps to represent different features.

(ii) The symbols are explained in the key of the map.

(iii) These symbols give a lot information in a limited space.

(iv) With the use of these symbols, maps can be drawn easily and the concept of the map can be understood well. There is an International agreement regarding the use of certain symbols.

(v) The symbols fall under this category are Called Conventional Symbols. Other category is called contextual symbols which are decided by the cartographers 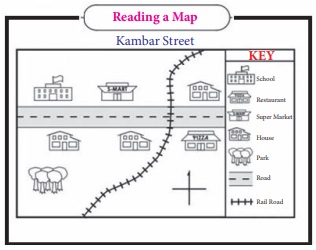 a. Underline the map title

d. In which direction of the rail track, the park is located?

e ) Colour the school with red.

f. Colour the supermarket with brown.

g. Colour the restaurant with yellow.

h. Colour the house east of the railroad with orange.