1. The following characteristics are essential for classification.

c. Both of them

Answer: (e) Both of them

4. Who proposed the five kingdom of classification?

2. Species is the basic unit of classification.

3. Fungi are non- green and non-photosynthetic in nature.

4. The binomial name of onion is Allium sativum.

5. Carolus Linnaeus is known as the Father of Modern Taxonomy.

III. True (or) False. If false write the correct answer.

1. Classification helps to know the origin and evolution of an organism. (True)

3. In the year 1979, Five kingdom classification was proposed. (False)

In the year 1969, Five kingdom classification was proposed.

Reason : It was first introduced by Carolus Linnaeus

b. Assertion is correct, Reasoning is incorrect

d. Assertion and Reasoning are incorrect

Answer: b. Assertion is correct, Reasoning is incorrect

2. Assertion: Identification, assortment and grouping are essential for classification

Reason : These are basic steps of taxonomy

b. Assertion is correct, Reasoning is incorrect

Answer: a. Assertion is correct, Reasoning is correct

The method of arranging the organisms into groups is called classification. When we classify things we put them into groups based on their characteristics.

Dichotomous key is a tool used to classify organisms based on their similarities and differences.

5. What is binomial nomenclature?

Binomial nomenclature is a universal system of naming organisms. It contains two names. The first name of binomial is genus name and the second name is species name.

6. Write the binomial name of a) Human being b) Paddy

a) Human being - Homo sapiens

1) It includes unicellular and a few simple multicellular eukaryotes.

2) The plant-like protists are photosynthetic.

1. Write the levels of classification.

Planatae (plants) are multicellular eukaryotes that carry out photosynthesis. Reserve food materials are starch and lipids in the form of oil or fat. Plant cells have cell wall and specialized functions, such as photosynthesis, transport of materials and support.

Animalia (animals) are multicellular, eukaryotic and heterotrophic animals. Cells have no cell wall. Most members of the animal kingdom can move from place to place.

❖ This system of classification is more scientific and natural.

❖ This system of classification clearly indicates the cellular organization, mode of nutrition, and characters for early evolution of life.

❖ It is the most accepted system of modern classification as the different groups of organisms are placed phylogenetically.

❖ It indicates gradual evolution of complex organisms from simpler one.

VIII. Give answer in Detail 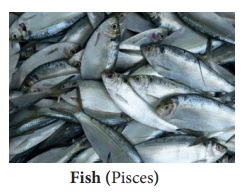 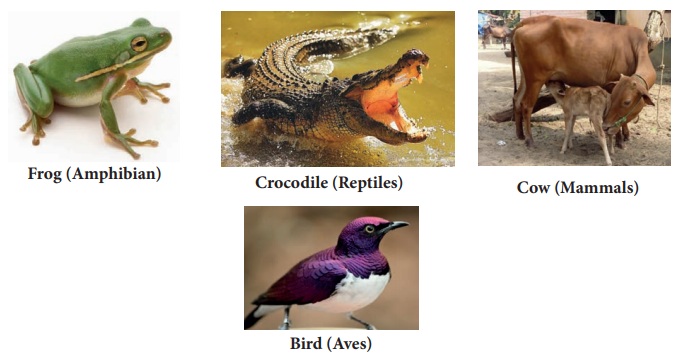 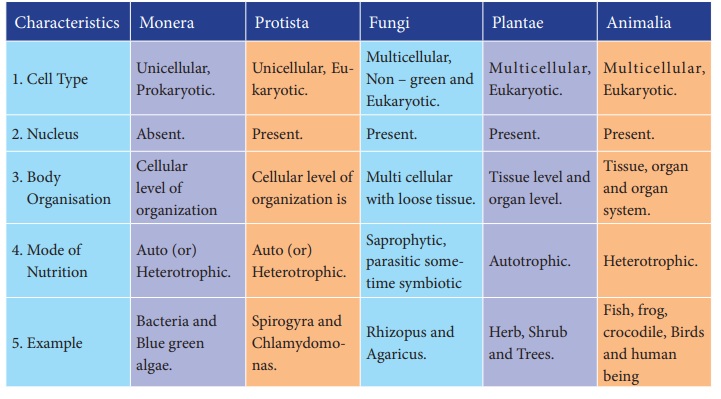 Gaspard Bauhin in 1623, introduced naming of organisms with two names which is known as Binomial nomenclature, and it was implemented by Carolus Linnaeas in 1753. He is known as ‘Father of Modern Taxonomy’.

Example: The nomenclature for onion is Allium sativum. Genus name is Allium, species name is sativum.

3. Give an account on the classification of invertebrates with few general features and examples.

1. Microscopic unicellular, pseudopodia, flagella and cilia for locomotion, reproduce by fission or conjugation.

2. Multicellular organisms with holes in the body. Skeleton formed of spicules, asexual and sexual reproduction.

4. Acoelomates, parasites inside the body of animals and human beings, mostly hermaphrodite (bisexual).

Which kingdom has saprophytic, parasitic and symbiotic nutrition. Why?

'Fungi' has the mode of nutrition - saprophytic, parasitic and sometimes symbiodic.

Parasites grow upon living hosts, e.g : powdery mildews. Saprophytes live on dead and decayed things, e.g Mucor. Symbiotic association is between a green plant and a fungus. The plant makes food by photosynthesis. It supplies the food to the fungus. The fungus in turn supplies the plant with water and mineral nutrients taken from the soil. e.g Mycorrhiza.

X. See the Diagram and write the kingdom :

Pictures of some living organisms are given below. Identify the kingdom to which each of these belong and write the kingdom name in the blanks provided. 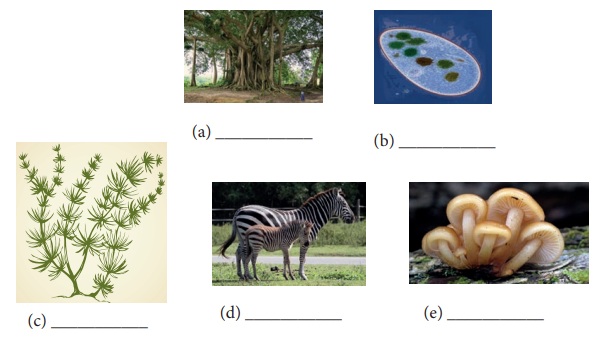 Pictures of some living organisms are given below. Identify the kingdom to which each of these belong and write the kingdom name in the blanks provided. 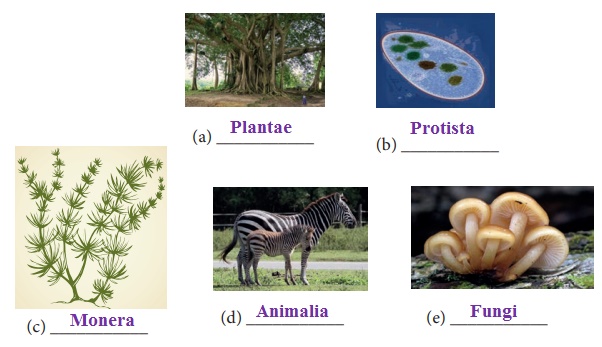