A violet or purple colour indicates the presence of salicylates (salicylic acid, salicylamide, and methyl salicylic acid). If the specimen merely darkens, the result is considered negative.

If only stomach contents or scene residues are avail-able, hydrolyse by heating with 0.5 mol/L hydro-chloric acid in a boiling water bath for 2 minutes, and neutralise with 0.5 mol/L sodium hydroxide before performing the test.

Colours ranging from pink, red, violet, to blue may indicate the presence of phenothiazines. Tricyclics may give green or blue colour.

––  O-Cresol test: Add 0.5 ml concentrated hydro-chloric acid to 0.5 ml urine or stomach contents,heat in a boiling water bath for 10 minutes, and cool. Add 1 ml of aqueous O-cresol solution (10 gm/L) to 0.2 ml of the hydrolysate, followed by 2 ml ammonium hydroxide, and mix for 5 seconds.

A blue or blue-black colour indicates the presence of paracetamol or phenacetin.

––  Marquis test: Add a mixture of 3 ml concentrated sulfuric acid and 3 drops of formalin to the gastric fluid. A purple colour which gradually turns blue, indicates the presence of opium or its derivatives.

Lee-Jones test: Add a few crystals of ferroussulfate and 4 to 5 drops of 2% sodium hydroxide to5 ml gastric fluid. Boil and cool. Add 8 to 10 drops of 10% hydrochloric acid.

Qualitative desferrioxamine colour test (QDCT): 2 ml of gastric fluid and 2 drops of 30% hydrogen peroxide are placed in two plastic tubes. 5 ml of desferrioxamine solution (500 mg in 4 ml of distilled water) is placed in one tube, and the resulting colour change is compared with the other tube (control).

If an orange or red colour develops, it indicates the presence of toxic levels of iron. The test must be done within 2 hours of poisoning or else it is unreliable.

A variation of this test is the Desferrioxaminechallenge test (DCT), in which 25 to 50 mg/kg ofdesferrioxamine is administered to the patient by intramuscular injection. Iron poisoning is indicated if the urine which is voided subsequently is pinkish in colour (vin rose´urine).

–– Meixner test: This test can be done on either stool or gastric sample. Dilute the sample with methanol, centrifuge, and filter it. Add a drop or two to a piece of newspaper. Encircle the spot with a pencil and dry it. Add a few drops of concentrated hydrochloric acid to the spot.

If a blue colour forms within a few minutes, it is indicative of the presence of amatoxin (present in most toxic mushrooms).

–– Fujiwara test: To three 10 ml tubes, add respec-tively 1 ml portions of (a) the sample, (b) purified water, and (c) aqueous trichloroacetic acid (10 mg/L). Add 1 ml sodium hydroxide solution (5 mol/L), and 1 ml pyridine to each tube, mix care-fully, and heat in a boiling water bath for 2 minutes. An intense red/purple colour in the top layer of tubeas in tube (c) indicates the presence of trichloro compounds such as chloral hydrate, chloroform, and trichloro ethylene. Tube (b) should show no colouration.

A foul odour (skunk odour) will be perceived if one of the following poisons is present: carbon tetrachloride, chloral hydrate, chloroform, methyl bromide, or any other chlorinated hydrocarbon.

–– Tensilon (edrophonium challenge) test: When 10 mg edrophonium is given intravenously in a case of sudden paralysis, there will be dramatic recovery if it is due to myasthenia gravis, while a case of poisoning (e.g. botulism) will not show any improvement.

–– Melzer’s test: This is a test done to confirm whether a given mushroom is toxic (especially Amanita phalloides). The spores obtained fromthe mushroom are stained with 1 drop of Melzer’s reagent (mixture of 20 ml water, 1.5 gm potas-sium iodide, 0.5 gm iodine, and 20 gm chloral hydrate), and viewed under a microscope. Spores of A. phalloides and a few other deadly mush-rooms will show a bluish black colour (“amyloid reaction”). However, a negative reaction does not mean that the mushroom is non-toxic.

This is a qualitative technique which involves the movement by capillary action of a liquid phase (usually an organic solvent) through a thin, uniform layer of stationary phase (usually silica gel) held on a rigid support (usually a glass, aluminium, or plastic sheet). Compounds are separated by partition between the mobile and stationary phases.

A very thin layer of silica gel or aluminium oxide is applied to a glass plate 20 × 20 × 0.5 cm, and vertical lines are drawn 1.5 cm apart to allow individual runways for each sample. Purified tissue extracts dissolved in 0.5 ml of methanol are serially spotted with a micropipette and dried in a small circle in the lower centre of a runway 1.5 cm from the bottom. Other samples are similarly spotted in other runways. A horizontal line (stop point) is drawn 10 or 15 cm above these startingpoints. A TLC tank is filled with suitable developing solvents to a depth of about 1 cm from the bottom. The plate properly spotted is then dipped into the solvent, the lid is firmly closed and the atmosphere is allowed to saturate with vapour. When the solvent front just touches the 10 cm horizontal mark, quickly remove the plate and examine under UV light (at 254 nm and 366 nm) for characteristic fluorescence or absorbance (Fig 36.1). Calculate the Rf value. This can also be done after spraying the plate with appropriate reagents to bring out char-acteristic colour spots.* This widens the scope of the analysis and increases the confidence of identification. 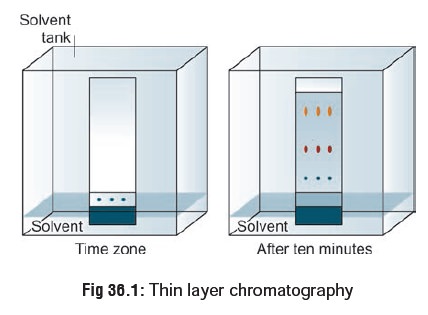 Approximate quantitation can be done by comparison with standards similarly prepared on the same plate, for intensity of colour and area size. The Rfs suggested in the literature can be used as a guide for identifying various poisons, though it is preferable that each analyst should prepare and establish his own Rf according to his own conditions and technique.

The recommended TLC visualisation reagents are as follows:

·              Mercurous nitrate reagent (acidic extract) which gives white spots with a grey centre on a darker back-ground with barbiturates and related compounds.

·              Acidified iodoplatinate reagent (basic extract) which gives mainly purple, blue, or brown spots with a range of basic and neutral drugs and metabolites.

·              Mandelin’s reagent (basic extract) which gives colours ranging from blue and green to orange and red with a variety of basic compounds.

It is to be noted that many additional mobile phase and spray reagent combinations could be used in place of those suggested here.

Thin layer chromatography (TLC) is a simple, inexpensive technique which is widely used. It takes only about 2 hours frombeginning to completion. It is also a very versatile method since the order of separation of compounds can be altered simply by changing the nature of the developing agent. However, inter-pretation of the plates can prove difficult and calls for a trained eye with considerable experience in recognising colours, spot shapes, and metabolite patterns.

·              The compound runs as a streak rather than a spot: The sample was overloaded. Run the TLC again after diluting the sample. Or, the sample might just contain many components, creating many spots which run together and appear as a streak, i.e. the procedure did not go as well as expected. Repeat! The sample runs as a smear or an upward crescent:

·              Compounds which possess strongly acidic or basic groups (amines or carboxylic acids) sometimes show up on a TLC plate with this behaviour. Add a few drops of ammonium hydroxide (amines) or acetic acid (carboxylic acids) to the eluting solvent to obtain clearer plates.

·              The sample runs as a downward crescent: Likely, the adsorbent was disturbed during the spotting, causing the crescent shape.

·              No spots are seen on the plate: The operator may not have spotted enough compound, perhaps because the solution of the compound is too dilute. This can be resolved by concentrating the solution, or, spotting it several times in one place, allowing the solvent to dry between applica-tions. Some compounds do not show up under UV light;try another method of visualising the plate.

·              If the solvent level in the developing jar is deeper than the origin (spotting line) of the TLC plate, the solvent will dissolve the compounds into the solvent reservoir instead of allowing them to move up the plate by capillary action.