Assume variable a holds 10 and variable b holds 20, then- 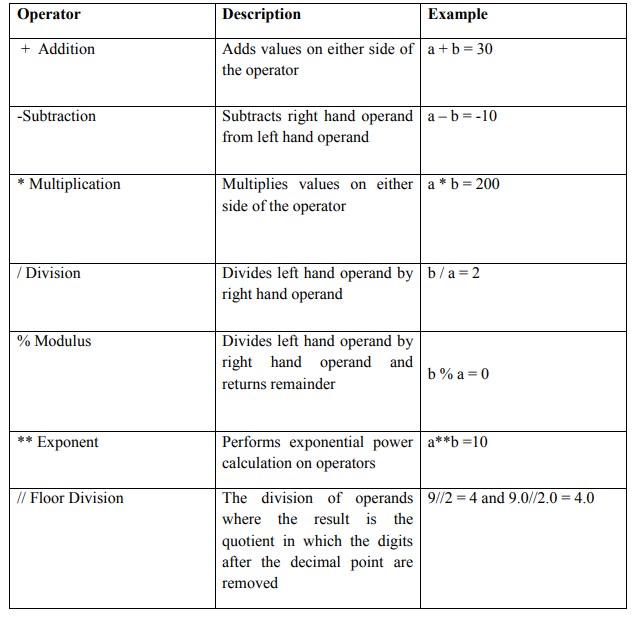 These operators compare the values on either sides of them and decide the relation among them. They are also called Relational operators.

Assume variable a holds 10 and variable b holds 20, then – 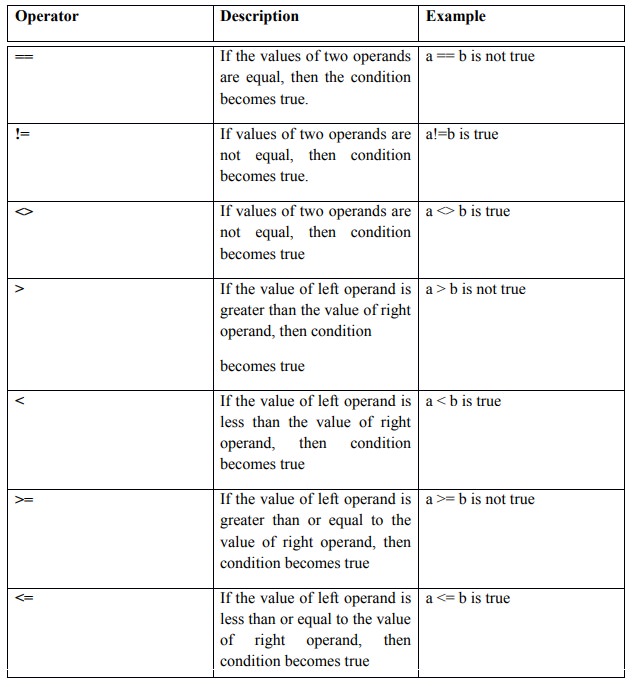 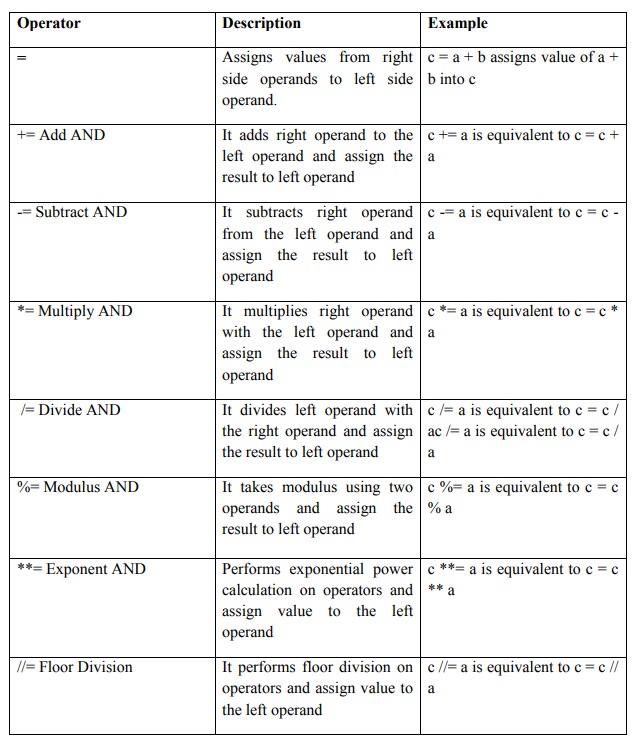 The simplest form of if statement is:

The boolean expression after ‘if’ is called the condition. If it is true, then the indented statement gets executed. If not, nothing happens. if statements have the same structure as function definitions: a header followed by an indented body. Statements like this are called compound statements. There is no limit on the number of statements that can appear in the body, but there has to be at least one. Occasionally, it is useful to have a body with no statements .In that case, you can use the pass statement, which does nothing.

A second form of if statement is alternative execution, in which there are two possibilities and the condition determines which one gets executed. The syntax looks like this:

print 'x is even'

If the remainder when x is divided by 2 is 0, then we know that x is even, and the program displays a message to that effect. If the condition is false, the second set of statements is executed. Since the condition must be true or false, exactly one of the alternatives will be executed. The alternatives are called branches, because they are branches in the flow of execution.

Sometimes there are more than two possibilities and we need more than two branches. One way to express a computation like that is a chained conditional:

print 'x is less than y'

print 'x is greater than y'

print 'x and y are equal'

elif is an abbreviation of “else if.” Again, exactly one branch will be executed. There is no limit on the number of elif statements. If there is an else clause, it has to be at the end, but there doesn’t have to be one.

3. Explain in detail about Fruitful Functions.

Some of the built-in functions we have used, such as the math functions, produce results. Calling the function generates a value, which we usually assign to a variable or use as part of an expression.

The first example is area, which returns the area of a circle with the given radius:

On the other hand, temporary variables like temp often make debugging easier. Sometimes it is useful to have multiple return statements, one in each branch of a conditional:

4. Write a Python program to find the square root of a number.

The process in which a function calls itself directly or indirectly is called recursion and the corresponding function is called as recursive function. Using recursive algorithm, certain problems can be solved quite easily. Examples of such problems are Towers of Hanoi (TOH), Inorder/Preorder/Postorder Tree Traversals, DFS of Graph, etc.

# take input from the user

A segment of a string is called a slice . Selecting a slice is similar to selecting a character:

If the first index is greater than or equal to the second the result is an empty string, represented by two quotation marks:

An empty string contains no characters and has length 0, but other than that, it is the same as any other string.

Python strings are immutable. ‘a’ is not a string. It is a variable with string value. You can’t mutate the string but can change what value of the variable to a new string. Eg:

#a now points to foo b=a

It is observed that b hasn’t changed even though ‘a’ has changed the value.

There are a number of useful operations that can be performed with string. One of the most useful of these is the function split. This function takes a string (typically a line of input from the user) and splits it into individual words.

Another useful function is lower, which converts text into lower case.

What is your name? Timothy Alan Budd

Other useful functions will search a string for a given text value, or strip leading or trailing white space from a string. An alternative version of split takes as argument the separator string. The string is broken into a list using the separator as a division. This can be useful, for example, for breaking a file path name into parts:

The inverse of split is the function join. The argument to join is a list of strings. The value to the left of the dot is the separator that will be placed between each element. Often this is simply an empty string. The values in the list are laminated along with the separator to produce the result string.

A method is similar to a function—it takes arguments and returns a value—but the syntax is different. For example, the method upper takes a string and returns a new string with all uppercase letters:

Instead of the function syntax upper(word), it uses the method syntax word.upper() .>>> word = 'banana'

This form of dot notation specifies the name of the method, upper, and the name of the string to apply the method to, word. The empty parentheses indicate that this method takes no argument. A method call is called an invocation ; in this case, we would say that we are invoking upper on the word. As it turns out, there is a string method named find that is remarkably similar to the function we wrote:

In this example, we invoke find on word and pass the letter we are looking for as a parameter. Actually, the find method is more general than our function; it can find substrings, not just characters:

It can take as a second argument the index where it should start:

This search fails because b does not appear in the index range from 1 to 2 (not including 2).

The string module contains number of useful constants and classes, as well as some deprecated legacy functions that are also available as methods on strings.

10. Write a Python program to find GCD of two numbers.

11. Write a Python program to find the exponentiation of a number.

12. Write a Python program to sum an array of numbers.

n = int(input(“Enter the number of elements for the list:”))

n = int(raw_input('Enter Number of Elements in the Array: '))

e= int(raw_input('Enter the Element to be Search '))

while pos < n and not found:

n = int(input('Enter Number of Elements in the Array: '))

print('Enter the Elements in Ascending Order' )

e= int(input('Enter the Element to be Search '))

while( first<=last and not found):

2.   explain in detail about operators in detail

3.   Explain in detail about iterations with example.(for, while)

4.   Explain the usage of else statements in loops

5.   Explain in detail about using for loop in sequence.

6.   Explain in detail about string built in function with suitable examples?

9.   Discuss with an example about local and global variable

10.        Discuss with an example about function composition

12.        Explain in detail about strings and its operations(slicing,immutablity)

13.        Program to find square root of a given number using newtons method

15.        program to find exponentiation of given number using recursion

19.        program to find factorial of a given number using recursion