Periodically a power plant may encounter the situation where coal must be stored for sometimes in a bunker, for instance during a plant shut down.

Periodically a power plant may encounter the situation where coal must be stored for sometimes in a bunker, for instance during a plant shut down. The bunker, fires can occur in dormant pulverized coal from spontaneous heating within 6 day of loading. This time can be extended to 13 days when a blanket of CO2 is piped into the top of the bunker. The perfect sealing of the bunker from air leakage can extend the storage time as two months or more. The coal in the bunker can be stored as long as six months by expelling air from above the coal with the use of CO2 and then blanketing of all sources of air. A control system used for storing the pulverized fuel in bunker is shown in figure.

Two methods are in general use to feed the pulverized fuel to the combustion chamber of the power plant. First is ‘Unit System’ secoandis ‘Centralor Bin System ‘.

In unit system, each burner of the plant is fired by one or more pulverizers connected to the burners, while in the central system, the fuel is pulverized in the central plant and then disturbed to each furnace with the help of high pressure air current. Each type of fuel handling system consists of crushers, magnetic separators, driers, pulverizing mills, storage bins, conveyors and feeders. 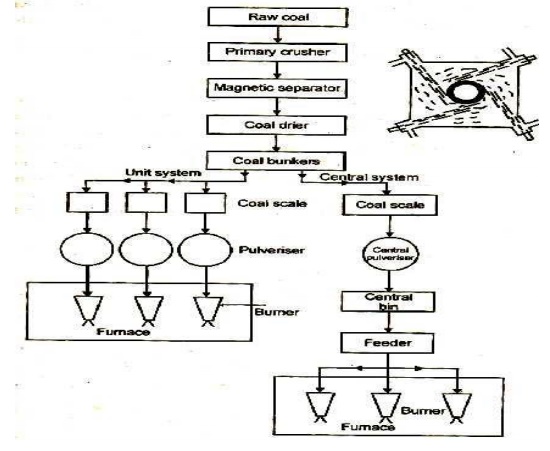 A line diagram of ball mill using two classifiers is shown in figure. It consists of a slowly rotating drum which is partly filled with steel balls. Raw coal from feeders is supplied to the classifiers from where it moves to the drum by means of a screw conveyor. As the drum rotates the coal get pulverized due to the combine impact between coal and steel balls. Hot air is introduced into the drum. The powdered coal is picked up by the air and the coal air mixture enters the classifiers, where sharp changes in the direction of the mixture throw out the oversized coal particles. The over-sized particles are returned to the drum. The coal air mixture from the classifier moves to the exhauster fan and then it is supplied to the burners. 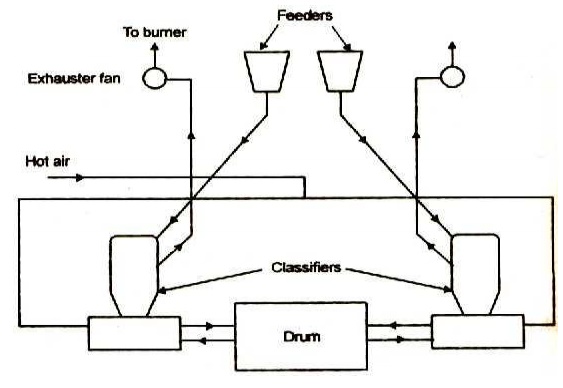 In this mill the coal passes between the rotating elements again and again until it has been pulverized to desired degree of fineness. The coal is crushed between two moving surfaces, namely, balls and races. The upper stationary race and lower rotating race driven by a worm and gear hold the balls between them. The raw coal supplied falls on the inner side of the races. The moving balls and races catch coal between them to crush it to a powder. The necessary force needed for crushing is applied with the help of springs. The hot air supplied picks up the coal dust as it flows between the balls and races and then enters the classifier. Where oversized coal particles are returned for further grinding.